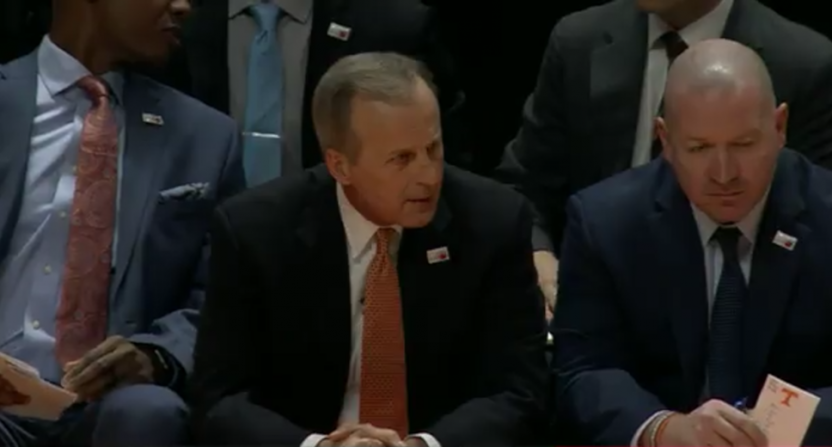 Inadvertent broadcasting of comments on hot mics happens from time to time, but what happened Tuesday night during the introduction to ESPN’s broadcast of Vanderbilt-Tennessee men’s basketball game was something else. The broadcast booth audio cut out, which, fine, that happens. There was some static; notable, but not exactly world-disrupting. But Tennessee coach Rick Barnes was miked up, and his mike somehow went hot at the exact wrong moment, when he was telling an assistant coach a story how he was still upset about how Teddy Valentine (one of the referees working Tuesday night’s game) controversially ejected him late in a NCAA tournament Round of 16 game in 2004, ensuring that Barnes’ Texas team would lose to Xavier.

This started with just that audio crash and static, and then with the audio picking up with Barnes’ mic instead of the audio from press conference clip they’re showing visually. But at first, this is just Barnes giving non-controversial instructions to players or assistants:

Then, the video feed cuts to a shot of announcers Sean Farnham and Roy Philpott, and they’re talking. But the audio heard is still from Barnes’ mic. And in response to a question from an assistant coach that isn’t picked up on the mic, Barnes starts talking about his past with Valentine:

An attempted transcription: “Oh yeah, we go 30 years, we started about the same time. He threw me out of a NCAA (tournament) game. I told him he had to. We didn’t work good. No, we were at Texas. He called a technical foul on Brandon Mouton for no reason, I said ‘All right, you want to make a mockery out of it, here we go.’ The game was over.” (According to Rick Telander’s Chicago Sun-Times piece from that game, the inciting incident for that ejection was a foul on Texas’ P.J. Tucker, not Mouton, but Mouton had five fouls in that game and this was 15 years ago, so that’s definitely an easy mistake to make.)

Things then go quiet, the game starts (with the only audio still from Barnes’ mic), and ESPN picks a great time to put up a graphic showing that Valentine is one of the night’s officials. And then, the game gets rolling, with Barnes making one more comment we can’t quite make out, and then the announcers’ voices actually coming in for the first time a few seconds later with play-by-play and analysis, with no immediate acknowledgement of the previous audio issues.

In a lot of ways, this seems worse than many hot-mic incidents. Barnes isn’t doing anything wrong here; he’s replying to an assistant and thinks he’s only talking to him, so he doesn’t know that he’s publicly airing his views on Valentine. (Although it’s interesting that we finally have an answer to “What did Barnes say to Valentine?”, a question posed in that 2004 piece.) And under normal circumstances, this never would have aired on TV; coaches’ mic feeds aren’t usually live, but rather collected, and then safe-for-air highlights are shown later. And Barnes isn’t a broadcaster told to be careful what he says; he’s a coach in the game, wearing a mic at the behest of the network involved, and presumably with the assurances that only safe comments will be broadcast.

So, whatever audio mishap happened with ESPN’s coverage led to a private conversation being broadcast on air. It also led to Barnes making comments about a referee in the current game that weren’t supposed to make it to that referee’s ears, or to the ears of the general public, and comments that never would have gotten out to those audiences if not for this technical error. And that seems pretty unfortunate for everyone involved.