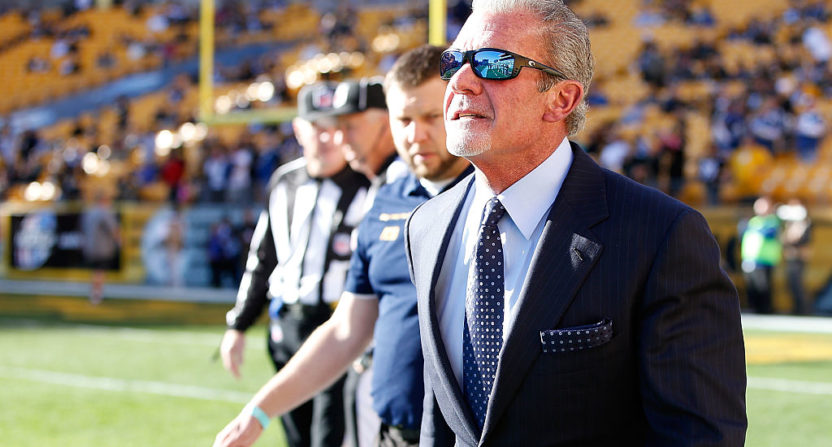 Hot microphones and comments when people think they’re off the air have led to plenty of people getting in trouble over the years, from Robert Durst to Dave Bliss to Jim Nantz. The latest hot mic incident may cause problems for Indianapolis Colts’ owner Jim Irsay and his relationship with quarterback Andrew Luck (who was ruled out for the season last week, thanks to an ongoing shoulder injury).

But Irsay wasn’t even the one miked up. That would be former Colts coach and current NBC analyst Tony Dungy, who was on NBC colleague Dan Patrick’s national radio show Tuesday and had his comments to Patrick during a commercial break inadvertently broadcast to the world. As Bob Kravitz of WHTR 13 (the Indianapolis NBC affiliate) writes, those comments were about Irsay’s views on Luck’s injury:

During a commercial cut-in of Dan Patrick’s national radio show, guest Tony Dungy, who did not know he was on the air, told Patrick during a break that Irsay recently said he believes that what’s holding Luck back from returning to the field is more mental than it is physical.

Patrick asked Dungy about the Luck situation, and Dungy responded, “I don’t know what’s going on there. Jim Irsay made a comment about six weeks ago, ‘It’s inside his head now.'”

Dungy: “Yeah, [Irsay] said that when I was out [in Indianapolis] for Peyton’s ceremony.”

Patrick was stunned. “Wow,” he said. “I really wonder if Luck’s future is in Indianapolis. I really do.”

Dungy didn’t respond initially, then when Patrick brought up the fact that Irsay expected Luck back at the start of the season or early in the season, Dungy replied, “They obviously believed it because they did nothing to prepare for him not being there.”

This isn’t the first time Irsay has suggested Luck’s shoulder injury is more mental than physical. As Kravitz writes, that was a theme during the preseason as well:

On Aug. 13, Irsay said, “It’s been said before, all sports is played on a 4-inch field between your ears. It’s really important we continue to help Andrew emotionally, mentally, get his confidence and his endorsement, deep down his rubber stamp (in) his heart of hearts because in the end, that carries the biggest weight.”

Then, during the Colts’ final preseason game this summer, Irsay went in the TV booth and again brought up those four inches between the ears.

“…You have to be able to deal with this, not only physically but mentally,” Irsay said. “I have no doubt that Andrew, the person that he is, he’s going to come out of this thing not just how he was but a better quarterback. ‘When’ is the question. That timetable is more on the football gods and Andrew’s gut feeling on how he’s feeling.”

A CBS Boston piece from October details some of the other comments Irsay has made about Luck this year:

[C]onsidering he has $140 million invested in the 28-year-old, you’d think owner Jim Irsay would hold Luck’s health with the utmost importance. Instead, Irsay has been the only member of the Colts who has been putting public pressure on Luck in the form of potential timelines on a return.

In January, just after Luck underwent shoulder surgery, Irsay tweeted, ” Will be ready for season!”

In mid-August, Irsay said that Luck “could start” the season opener; Luck could not.

In June, when Luck was still recovering from the surgery, Irsay set out his expectations for the franchise.

“We’re into plural Lombardis,” Irsay said. “That’s what our goal is. And I’ll be damned if we don’t go out and get them.”

On that same night, Irsay said that Luck’s surgery was a simple process and that the quarterback would be fine.

“This was, quite frankly, not that complicated of a surgery. It was a simple labrum repair,” Irsay said. “There are a lot of other things that could’ve gone into that type of surgery that weren’t involved at all.”

Turns out, it wasn’t that simple. It’s almost as if Irsay didn’t know what he was talking about — not in June, not in August, not in September.

Per multiple sources #Colts owner Jim Irsay is privately furious about Andrew Luck situation. Feels he has been misled throughout.

So these comments seem somewhat in line with what else is going on. However, it’s not entirely clear how or where Irsay said them, as Kravitz’s story includes the correction of “An earlier version of this story inaccurately stated that Tony Dungy said to Dan Patrick that, “Jim Irsay made a comment to me.” No such conversation took place. Dungy was referring to public comments that Irsay had made earlier,” but Dungy’s comments place this around the Oct. 7 ceremony to honor Peyton Manning and none of the Irsay comments that have gotten much play seem to be from around then.

The “inside his head now” also seems like a step further than anything Irsay has said publicly. But perhaps this is Dungy paraphrasing something he read Irsay say, and doing so when he believed he was off the air. If that’s the case, though, Dungy should have done a better job of stating that, as these comments were obviously going to stir the pot (as Patrick’s reaction illustrates). It’s also possible that this was a private conversation as Dungy’s comments implied, but Dungy never meant for it to go public, so his request for a correction saying he was “referring to public comments that Irsay made earlier” could be to try and make Irsay not as mad at him.

In any case, this adds to the drama between the Colts and Luck, and to the questions about how they let him play with fractured ribs (unlisted on the injury report) in 2015, kept him playing through shoulder issues in 2015 and 2016, and failed to provide him any protection up front, leading to him taking a lot of punishment. The team’s handling of this injury hasn’t inspired any confidence either, and Irsay’s comments will only add to that.

Remember when “NFL insider” Mike Greenberg “reported” that Luck was frustrated with the team’s direction and might be looking to leave, and was roundly shot down and mocked by actual reporters and colleagues? Well, that probably wasn’t the best move at the time for Greenberg, but his “report” may wind up working out to be true in the end. And Dungy’s hot mic comments about Irsay may play a role in that. They’ve certainly added to the pot here, creating another national story about how the Colts and Irsay have handled Luck’s injury, and one that doesn’t make the franchise or the owner look good.