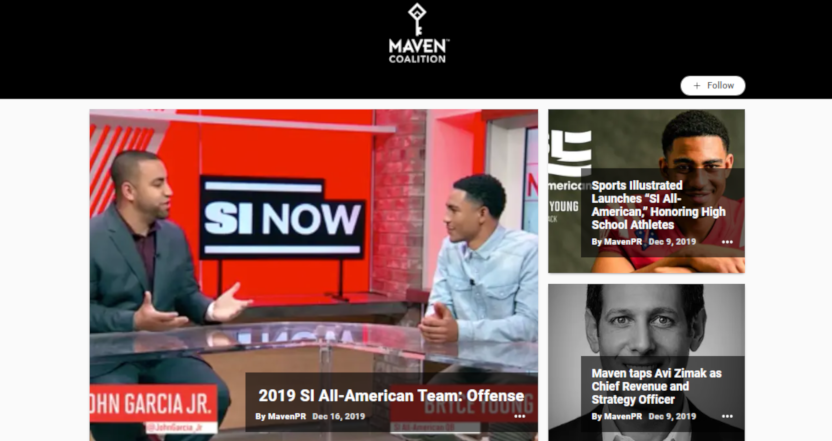 There have been plenty of concerns raised about TheMaven’s takeover of Sports Illustrated, both from remaining staffers (who said “Decisions made by new management over the last few months have put SI’s reputation and long-term health at risk” in their letter informing management of their intentions to form a wider newsroom union) and from external readers and critics over the poor quality of some of the reporting from team site “Mavens” and the poor behavior of some of those Mavens. Amidst that criticism, TheMaven’s own most recent SEC filing (found via Alex Weprin of The Hollywood Reporter) is notable on several fronts, especially for the dramatic change in tone since their summer 2018 filing that saw them state that they lost more than $8 million in the first six months of 2018, saw executives express  “substantial doubt about the Company’s ability to continue as a going concern within one year,” and saw them add that without further financing (which they were able to get), they only had enough cash to operate through June 2020. Here are some key parts of this most recent filing (dated Tuesday):

TheMaven, Inc., announced that its preliminary numbers indicate the company outperformed its financial forecasts for 2019, including the Q4 dramatic transitions of Sports Illustrated and TheStreet. Maven generated more than $45 million in revenue for Q4, leaving more cash in the treasury than anticipated in its most recent financing.

…“We are pleased by the positive results,” Maven founder James Heckman said. “Similar to our 2018 restructuring initiatives, we quickly forced many difficult, and sometimes traumatic changes, which we deemed necessary to transition SI’s business back to a trusted and growing heritage brand. We will continue to be true to our business model and are extremely proud to be operating a profitable and growing business in times like these, with best in class content and technology as its backbone.”

Maven anticipates that in 2020 it will have more than $27 million in operational savings at Sports Illustrated, compared to 2018. Those include significant changes in print frequency and circulation, while improving the size, weight and quality of the magazine, whose first issue under its new format will launch in February. The company also expects $5 million in savings from efficiencies related to Maven’s digital infrastructure and $7 million by consolidating duplicative operating costs. Maven’s recent acquisitions now leverage a finance and accounting organization capable of supporting a now considerably larger public company, and a sophisticated consumer subscription marketing enterprise to drive digital subscriptions across TheStreet, Sports Illustrated and all “mavens,” as well as improving the SI print subscription business.

There’s a lot in there worth discussing. First, that last paragraph is notable for showing just how much TheMaven’s SI cuts are expected to save, which (as per a November report from Yahoo’s Daniel Roberts) seem set to include dropping to 17 print issues a year (one regular issue a month and five special issues) and “closing” those issues over three weeks in advance. That may improve the “size and weight” of the magazine, but it’s certainly debatable if removing all sense of timeliness from its stories and reducing the amount of print issues subscribers receive will improve its “quality.” And it’s worth noting that this projected cost savings is on the expenditure side and doesn’t account for potential losses in subscription and advertising revenue by making the magazine less frequent and less timely (to say nothing of the massive staff cuts in October that removed many talented writers); you can have as much of a “sophisticated consumer subscription marketing enterprise” as you want, but they need something to sell, and there certainly will be some challenges with selling the new SI.

Beyond that, it’s interesting to have a number out there for the traffic brought to SI.com from the Maven team sites: 5.6 million unique users in December. That’s certainly not an insignificant number (and it’s over five times what, say, The Players’ Tribune has been doing), but it’s not the biggest number in the world either. For comparison, even after Fox Sports’ ill-fated 2017 pivot to video cost them 88 percent of their digital audience within a few months, their widely-panned site full of outdated videos was still drawing 16.7 million unique visitors monthly in the summer of 2017, either out of inertia, a desperate need to watch clips of Skip Bayless, or both.

As for SI itself, the SI Group under Time Inc (which included a wide range of titles, from SI to Golf to the FanSided network, the pre-Maven mavens) set a traffic record with 60.4 million unique views (22.4 million at SI.com itself) in September 2017. And SI then posted 61 percent further growth through February 2018. And the Maven filing says SI saw “year-to-year increases of 7.4% in unique users (29 million in December 2019 vs 27 million in 2018); 32% in sessions, 24.5% in sessions per user, and 50% in average time spent on page.” So the team sites accounted for around 19.3 percent of the total SI unique users in December 2019, and some of that may not be positive or repeatable traffic; a whole lot of people tuned in to see the USC “Maven” trip all over himself about their coaching move and get refuted by actual SI writers, for example.

It’s also worth keeping in mind that the gain from the Maven sites isn’t in a vacuum, either. This comes after SI lost the FanSided traffic that was previously under its umbrella (FanSided was not included in the SI sale). A source tells AA that the Comscore numbers there were typically in the 4-5 million range.

Beyond that, there’s an interesting discussion near the end of this filing about coming changes: “Other strategic changes at Sports Illustrated include a shift to real-time digital news, and a coming expansion of digital video. In print, Maven is making significant investments in top-tier journalists to produce more impact-focused and investigative long form stories. Clearing the way for these changes, Maven eliminated SI’s “print-news” department and halted its long-form video strategy, which had been suffering significant financial losses.” It will be interesting to see just what they mean by “significant investments in top-tier journalists,” and it’s also notable to see that long-form video approach stopped. We’ll also see what that will mean for SI TV, as long-form video had long been seen as a key way to drive subscribers there and a key way to maintain SI’s storytelling focus, and they produced some significant content under that banner.

At any rate, it’s certainly notable to have a Maven filing with numbers for what they’re expecting from SI in 2020, and to have them say they exceeded their 2019 revenue targets and are projecting generating $20 million of EBITDA (earnings) on $160 million of revenue for 2020. It’s also interesting to see them spell out how much they’re hoping to save through cuts at SI, including the dramatic changes to the print magazine. We’ll see how that plays out for them.