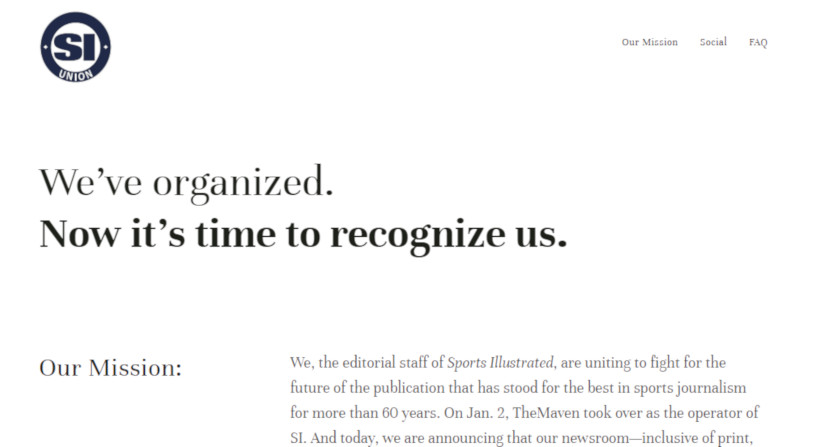 There’s been a lot of turmoil at Sports Illustrated over the past year, with the magazine sold to Authentic Brands Group last May and its media operations then sublicensed to Jim Heckman’s The Maven in June, numerous prominent people leaving (including long-time writer Tim Layden and editor-in-chief Chris Stone), half the remaining staff laid off in early October, and multiple controversies over the new direction under The Maven (including questions about The Maven’s financial stability, discussions about a further print reduction and a magazine that will feature even less timely stories, and notable missteps from Maven writers, from inaccurate reports through sexual harassment of colleagues).

Now, Ben Strauss of The Washington Post writes that the SI newsroom staff are looking to unionize and join the NewsGuild of New York.

The NewsGuild of New York represents journalists at The New York Times, The New Yorker, BuzzFeed, and other publications, and it currently represents about 15 SI writers who mostly work for the print magazine. The current union drive would expand the SI bargaining unit to one of around 80 people that would “include most editorial staffers, including digital and video journalists,” and those involved say more than 90 percent of those who would be eligible for this bargaining unit signed a petition supporting the unionization effort. The staffers involved have launched SIUnion.org, which features the full text of the letter they sent management Monday to inform them of their intentions to form a wider SI union.

Here are some highlights from that:

Our audience deserves a thriving Sports Illustrated, the leading national outlet uncompromised by business entanglements with leagues. Even amid last fall’s operational uncertainty, our independent reporting held the powerful to account, while our rich storytelling illuminated the human experience. As the people who make SI, we know as well as anyone that our future relies on digital growth. But we cannot succeed without maintaining the standards that made our publication excellent in the first place.

Decisions made by new management over the last few months have put SI’s reputation and long-term health at risk. The October layoffs at Maven’s direction gutted our newsroom. Two dozen employees who lost their jobs were women or people of color, leaving us less representative of the world we cover. Moreover, Maven’s directive to launch a network of team reporters on SI’s platforms without sufficient vetting or editorial oversight has already resulted in errors that severely undermine our credibility.

…Our entire newsroom deserved to be organized even before the events of the last three months. Under previous owners, SI had extended some, but not all, benefits of the existing union contract to the digital and video employees among us—even though we were functionally one newsroom. Some of us could be called upon to work long hours without overtime, or work for years as temps employed by a third party with inferior benefits and job security. We had no rights in disciplinary proceedings, and through rounds of layoffs, we were reliant on SI’s beneficence for the severance pay our union-covered peers received. The same was true for annual salary increases.

Our mission as a union is to safeguard Sports Illustrated’s standards and integrity while creating a better workplace that includes print, digital and video employees under the same umbrella. We seek to extend the same protections our print colleagues had under a Guild contract: pay floors and raises, just cause, severance, and more. We deserve a voice in the decisions about our future: The network of team reporters must be held to the same editorial standards and processes as the rest of the SI staff. Our newsroom must be properly staffed to cover major events and pursue the long-term projects and investigations that separate us from other outlets. We must prioritize diversity by establishing inclusive hiring practices and paths to advancement for women and people of color. We must conduct a company-wide gender and race pay equity study, followed by immediate correction of any unjust pay disparities. And we must implement stronger anti-harassment training and policies to secure a safe work environment for all.

Some staffers spoke to Strauss about this union push, and said that this is happening now because of what’s happened with new ownership, but that a union drive was likely even without that ownership change.

“We are unionizing to make sure SI is a safe, inclusive place to work, where all employees are treated fairly and can continue to do our jobs at a high level,” senior writer Jenny Vrentas, who was involved in the organizing effort, said in an interview.

“Unions are a stabilizing force at all kinds of companies,” said Jack Dickey, an editor and writer at SI, who was also involved in organizing. “Even if the change in ownership has played some role in motivating people, we would have done this anyway.”

…“I hope management understands that the vast majority of the staff wants this,” Dickey said, “and that our best chance at a collaborative, strong future involves voluntary recognition.”

This isn’t entirely about The Maven, but the changeover in management there certainly seems to be playing a role in this happening now. As for what’s next, management can either give the union voluntary recognition and begin bargaining with them, or refuse that and force the organizers to file for an election with the National Labor Relations Board.