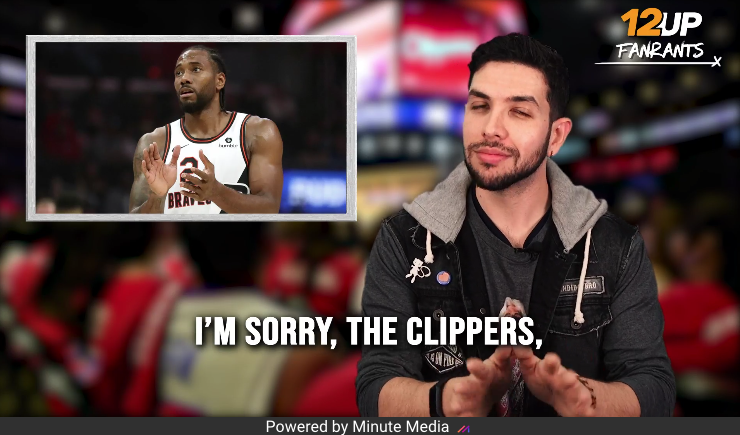 Minute Media is looking to expand their sports properties. The company started back in 2011 when a trio of Israeli entrepreneurs founded soccer-focused FTBpro (now 90min.com), focused on user-generated sports content (written and video) that could be distributed to different publishers as well as to their own websites. They’ve since added US-focused 12up (video screenshot seen above) and esports-focused DBLTAP (amongst other sites), they bought Mental Floss last September, and they bought The Big Lead from Gannett for an unspecified amount back in March. And now, as per Bloomberg, they’re in exclusive talks to buy The Players’ Tribune (which has had plenty of talk out there about its struggles recently). Here’s more on this from Bloomberg’s Liana Baker, Scott Soshnick, and Sarah McBride:

Digital media company Minute Media is in talks to buy the Players’ Tribune, a website started by former baseball star Derek Jeter, according to people familiar with the matter.

While the companies are in exclusive talks, there is no guarantee the discussions will lead to a deal, said the people, asking not to be named because the matter is private. The potential value of the Players’ Tribune in a deal couldn’t be learned.

…The Players’ Tribune raised $40 million in funding in 2017 from investors including IVP, New Enterprise Associates and GV, Alphabet Inc.’s venture capital arm, according to a statement at the time. It has raised about $60 million since its founding.

Bloomberg’s piece also mentions that “Minute Media has raised $77 million to date from investors including Battery Ventures, ProSiebenSat.1 Media SE and Goldman Sachs Group Inc., according to a statement.” However, a BusinessWire press release from Minute Media in June (about them picking up $40 million in new funding) had that total significantly higher:

Today, global publishing platform Minute Media announced that it raised $40 million in a funding round with new investors Hamilton Lane and Maor Investments. The company’s existing investors include Battery Ventures, Goldman Sachs, ProSieben, Dawn Capital, Qumra Capital, Vintage Investment Partners and Gemini Israel Ventures. This brings Minute Media’s total funding to $120 million to-date. Minute Media has created the industry’s leading digital publishing platform and uses this proprietary technology to power content and media solutions for its own properties in addition to the licensing of standalone and full stack solutions to other leading publishers and digital brands.

“With the commercial momentum we’re experiencing as an organization, growing at 100% year-on-year, we’re purposely focusing investment on the deepening of our publisher product and tech offering — a part of our business that is rapidly expanding. Additionally, the new capital enables us to continue to be aggressive on the M&A front, constantly looking to acquire premium publishing brands across new content verticals and within new markets,” said Asaf Peled, Founder & CEO.

At any rate, Minute Media just picked up a bunch more money this summer, and this appears to be part of what they’re planning to use it on. If the deal goes through, it will be interesting to see what that means for The Players’ Tribune. The Derek Jeter-founded site was founded in 2014 and hit some initial success, but has had rougher patches recently, with Digiday’s Max Willens reporting this week that Comscore numbers have them below a million unique users in 14 of the last 15 months.

That piece also mentioned that The Players’ Tribune is currently down to around 20 editorial staffers following layoffs earlier this year. We don’t know exactly what Minute Media’s plans for the site would be if they are successful in picking it up, but when they bought The Big Lead, the site’s immediate staffing went from around 10 full-time and part-time contributors to four writers (and to having 12Up editor Brian Giuffra oversee TBL). So it’s certainly possible that a TPT acquisition could come with significant staffing cuts there, which would only add to the massive job losses we’ve seen media this year.