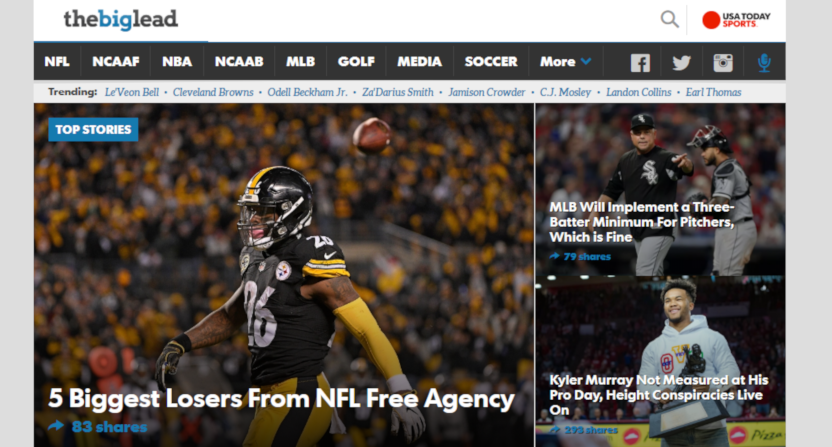 There are some major changes in the works for The Big Lead. The site, which current Fox Sports personality Jason McIntyre started in 2006 with David Lessa before selling to Fantasy Sports Ventures in 2010 for “low seven figures,” has been owned by Gannett (owner of USA Today and numerous other newspapers) since 2012, but that’s coming to a close.

Mark J. Burns reports at MorningConsult that The Big Lead has been sold to Minute Media, and that comes with significant staffing changes, including the exit of McIntyre (who stayed with the site through its previous iterations):

Rich Routman, president of Minute Media, a New York-based global publishing platform, confirmed the site’s purchase in an interview and said that Big Lead co-founder and Fox Sports media personality Jason McIntyre will no longer be part of the site.

McIntyre’s representative at Creative Artists Agency also confirmed the news. Gannett did not immediately respond to a request for comment.

Of The Big Lead’s roughly 10 staffers, some full-time and some part-time, only a handful remained as of Thursday afternoon, two people with direct knowledge of the situation said.

Minute Media owns the likes of 90min (soccer), DBLTAP (esports), and 12up (U.S. sports-focused), and they bought MentalFloss last September. Awful Announcing has learned The Big Lead will remain a separate website, but will transfer at some point to the same platform 12up is on. Andrew Marchand of The New York Post has more on who’s been retained:

Minute Media has slashed the staff in half, leaving Ryan Glasspegiel, Bobby Barrack, Kyle Koster and Ryan Phillips behind as the four writers.

Minute Media president, Rich Routman, said it will be adding more, but doesn’t want to duplicate what it already does with its site, 12Up.com.

…Routman said the reason that McIntyre didn’t make the transition from Gannett is because his company wants to leverage its new site with its own 12up.com.

“In an ideal world, you keep everybody,” Routman said.

“Bobby Barrack” is presumably a typo from Marchand, likely referencing regular TBL writer Bobby Burack. The last post on the site that isn’t from one of those four remaining writers is a piece published Tuesday from Michael Shamburger. McIntyre also last wrote for the site on Tuesday. Other recent writers not retained include Jason Lisk and Tully Corcoran.

As Burns notes, Minute Media’s Crunchbase profile indicates they’ve raised $75.8 million over time, starting with a Series A round of $5.8 million in 2013 and most recently with a Series F round of $17 million last May. TechCrunch’s Ingrid Lunden wrote about Minute Media’s overall strategy then, following that funding round (led by Goldman Sachs, La Maison and Vintage, with further participation from existing investors):

Minute Media — which provides user-generated sports articles and videos from some 5,000 contributors that then gets distributed by brands like Sports Illustrated, as well as on Minute Media’s own sports websites that collectively attract between 80 million and 90 million users per month — has raised $17 million in funding, capital that it will use to expand into new markets like China as well as start to formulate its next steps for tackling other content beyond sports.

…Asaf Peled, Minute Media’s founder and CEO, said the startup is not disclosing its valuation, but according to figures from PitchBook, it appears to be around $200 million. Peled noted that the 80-90 million audience the startup has today is on the back of a growth rate of 130 percent in 2017.

…“We have over 1,500 influencer communities integrating with our platform,” Peled said. One example is a group of Real Madrid fans in Vietnam, he said. “They will take pieces of our content and share them among their community, driving traffic to the relevant part of our site. It’s essentially a B2B2C model that is driving a lot of our traffic.”

That piece mentions that at that time, the company was working with two general tracks; first, people directly accessing their sites and sharing the content there (like the aforementioned Real Madrid fans in Vietnam), and second, publishing content to the sites of its partners, including Sports Illustrated, MSN (in the U.S.), and Yahoo (in Europe). The second track made up around a third of their business at that point. (Disclosure: Awful Announcing formerly had a content deal with Minute Media.)

It’s unclear just what’s next for The Big Lead under this new ownership, and how the site will fit into Minute Media’s overall plan. The site’s a more recognizable brand name to most U.S. sports fans than anything else Minute Media has, but the departing writers and the change in editorial leadership may lead to some of their current readers leaving as well. We’ll see what Minute Media does with this property and where The Big Lead goes from here.