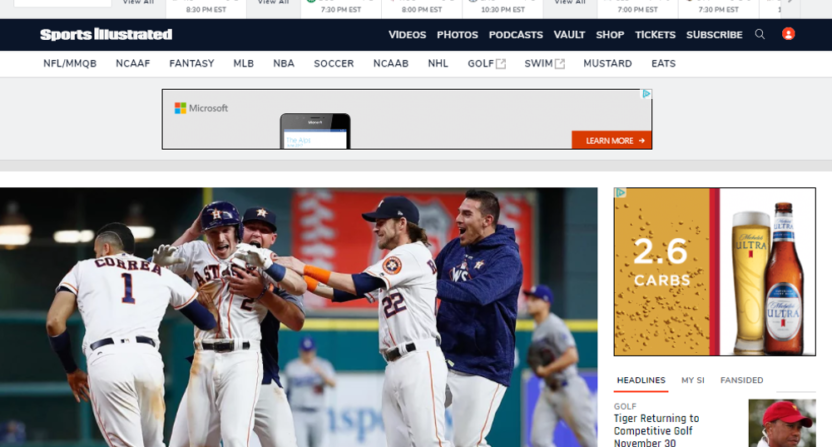 There have been plenty of stories about Sports Illustrated‘s challenges in the current media landscape, from layoffs to reduced print issues to discussion of the brand not seeming desirable for potential Time Inc. buyers, but they say they’re experiencing significant digital growth.

A Time Inc. press release Monday talks about the company’s overall online growth, and spotlights the SI Group as a big part of that:

Time Inc. (NYSE:TIME) reaches its largest digital audience ever with more than 139 million monthly unique views (+27% YoY and +6% MoM), based on comScore’s latest monthly US multi-platform report for September 2017. Traffic from mobile devices, including smartphones or tablets, was up 37% at 116.3 million UVs; about 93.7 million UVs (+38% YoY) are mobile-only visitors. Mobile visitors now represent 84% of Time Inc.’s total digital audience with a reach of 59% of total mobile internet users in the US.

“With 30 million print subscribers and a digital audience of 139 million, we are leveraging our massive scale and powerful brand portfolio to serve our consumers anytime, anywhere across platforms — this is the foundation of our strategy as we move quickly to generate new revenue streams and deliver growth,” said Rich Battista, President and CEO of Time Inc.

That traffic record is certainly good news for SI, and it’s also significant how that’s broken out. SI.com’s 62 percent gain year over year growth is notable and impressive, but it’s also interesting how much of the audience is coming from other SI Group properties (which would include Golf.com, FanSided, and more).

It does seem that the digital efforts (including a big 2016 redesign) are bearing some fruit, and that fits with what SI group editorial director Chris Stone told AA shortly after his promotion to that role last summer:

It’s also notable how SI continues to branch out into other partnerships and potential revenue sources. They’ve done a lot of that with their Swimsuit Edition, turning it into a year-round brand with digital content (some pay-per-view), runway shows and an apparel line, and they’ve explored VR content with both documentaries and in-magazine connections.

And Monday also saw some further news on another partnership front; the Sports Illustrated: True Crime series they’ve teamed up with famed producer  Jerry Bruckheimer for (previously discussed in February, when it was being pitched to various TV networks and streaming outlets) has found a potential home, advancing to pilot as part of a larger deal with Paramount Network (formerly Spike). Here’s more on that from their release:

From SPORTS ILLUSTRATED and Jerry Bruckheimer TV, “Sports Illustrated: True Crime” (working title) investigates the complicated truths and realities of athletes involved in criminal activity and misdeeds. The one-hour television series is based on SPORTS ILLUSTRATED’S multiplatform “SI True Crime” franchise. Each television episode will be accompanied by a piece on SI.com and in the print magazine, offering an unprecedented multiplatform experience.

That’s a further example of what Stone discussed about trying to connect print content with SI’s other efforts, and it could possibly lead to some interesting articles as well as the shows. SI has certainly produced excellent coverage on athletes and crime before; a few stories that come to mind include Gary Smith’s 1996 piece on Richie Parker’s quest to play college basketball after a sexual abuse conviction, Thomas Lake’s 2011 story on Darrent Williams’ death, Lake’s 2012 feature on Rae Carruth’s attempt to kill his son, and Chris Ballard’s 2013 piece on the disappearance of Bison Dele.

They’re an outlet that definitely can do this well, and doing those kinds of stories with a TV component as well may make more financial sense. At any rate, it will be interesting to watch and see where SI goes from here. But these items both go to show how they’re involved in much more than just the magazine these days.