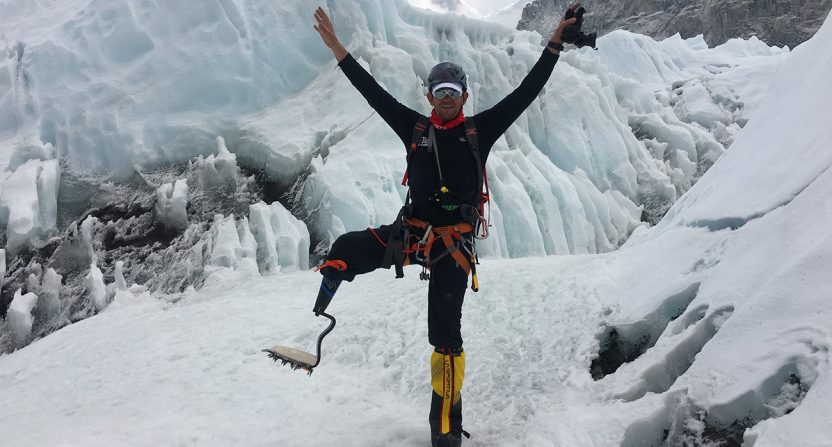 The Sports Illustrated-produced first virtual reality documentary of an ascent of Mount Everest is out, and the results are impressive and speak to some interesting new storytelling techniques SI is using. Capturing Everest, which SI did in conjunction with fellow Time Inc. brand Life VR and digital network Endemol Shine Beyond USA, is a four-part series available now on the Life VR app and on a SI microsite. It’s the first VR documentary of an Everest climb (which took place last spring), and it tells some fascinating stories, particularly that of Jeff Glasbrenner, a Paralympian and and 25-time Ironman who became the first American amputee to reach the Everest summit, as well as those of fellow climber Lisa Thompson and guide Brent Bishop. Here’s a look at some of the video:

The coverage here goes well beyond just the videos, too, as SI featured Glasbrenner on its latest cover and profiled him (along with Thompson and Bishop) in an excellent piece by Austin Murphy. Here’s the cover: 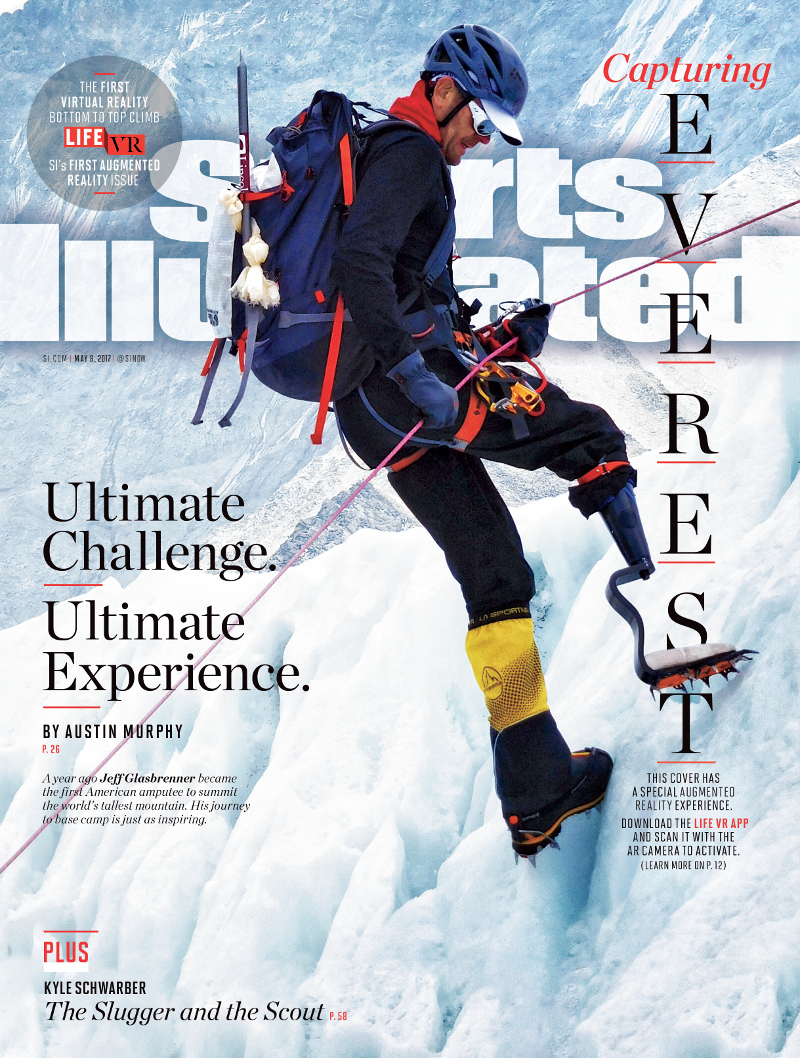 And an excerpt from Murphy’s story:

All who would presume to stand at the top of the world—29,029 feet, close to the cruising altitude of most commercial flights—must endure the full spectrum of suffering, physical and mental. On his first night in Camp 1, just shy of 20,000 feet, Glasbrenner woke up oxygen-starved and, for a scary minute or so, was struggling to breathe (a temporary condition called Cheyne-Stokes respiration). As the expedition wore on, he coped with the additional anxiety of watching his weight drop. He lost 20 pounds from his 6’ 2″, 170-pound frame—nearly half of that in the final week, as the team fidgeted through a five-day holding pattern at Camp 2 (21,000 feet), waiting for 200-mph winds at the summit to die down.

As Glasbrenner became leaner, so did his stump, which made the fit of his prosthesis less snug. Thankfully, he’d anticipated this issue and developed a high-tech solution for it: “I just kept adding socks. Lots of socks.”

“On Everest,” he says, “small problems turn into big problems. As they say on the mountain, ‘Lose a glove, lose a hand.’ I had to be highly attentive to my leg.” A sore or abrasion on his stump, he noted, “could have meant game over.”

The whole story’s well worth a read, from how Glasbrenner lost his leg to how he’s adapted to that and what he’s been able to accomplish, but it’s the presentation that’s perhaps most interesting. SI writers have been producing excellent sports stories of athletes overcoming adversity almost since the current magazine’s inception in 1954, but what’s new here is the way they’re delivering it. In addition to Murphy’s story, there’s the VR/360-degree documentary to check out, and the two are heavily integrated; in fact, for the first time ever, SI has delivered an augmented-reality issue, meaning that readers can scan select photos in the print magazine with the Life VR app on their smartphone or tablet to launch multimedia content. The editors’ note on this is certainly interesting, especially for its conclusion:

But Capturing Everest is more than a carnival for the senses. It’s a testament to the vision of Mia Tramz, managing editor of LIFE VR and all of Time Inc.’s virtual reality projects. It’s yet another example of how SI is delivering the access and storytelling for which we’ve always been known in cutting-edge ways. And it’s the jumping-off point for a new idea of what a magazine can be. Once you’ve downloaded the LIFE VR app, activate its AR camera and scan the cover image of Glasbrenner in action on Everest. The animation and video you’ll see on your phone are the gateway into our first augmented-reality issue. Look for the red AR box (above) on this and other select pages, including in the Glasbrenner feature. Scan and watch those pages come to life with multimedia content—a film session with the newest Bears QB, a gamer’s imagining of a basketball stage dad’s comeuppance—that enhances our core reading experience.

Thinking back to the eve of his triumph, [Tenzing] Norgay wrote, “It is many miles and many years that have brought me here.” The same goes for this issue in particular and SI in general. Our goal is to make you feel the most inspiring stories in sports through words, pictures, sound, video—and now, in forms of reality that would amaze even a visionary like Norgay. This issue is one more step. Come with us as we keep climbing.

SI executives have long talked about trying to tell stories in new ways, and group editorial director Chris Stone told AA that was an emphasis for him after he took over that job last summer, but moves like this are significant steps along that front. At the very least, they’re definitely different than many of the things SI has done before. They also show off a closer integration with other Time Inc. properties, which may prove important to SI’s future; with Time Inc. deciding last week to not pursue a sale, things are status quo for now, but many potential buyers raised questions about SI and if it was a fit for them.

It’s no secret that SI needs to go far beyond traditional print to remain relevant and solvent in this day and age. They’ve done plenty of interesting digital things before, of course, but this Capturing Everest move is particularly notable given the cross-Time Inc. integration, the usage of VR (and putting that right into the print magazine), and the very different kind of storytelling on display here. Well-written cover stories like Murphy’s are still essential as well, and an interesting element is that SI isn’t replacing them, but rather tying them in to this documentary and the VR video coverage available there. We’ll see what kind of response this gets, but it’s definitely notable to see SI trying this out.