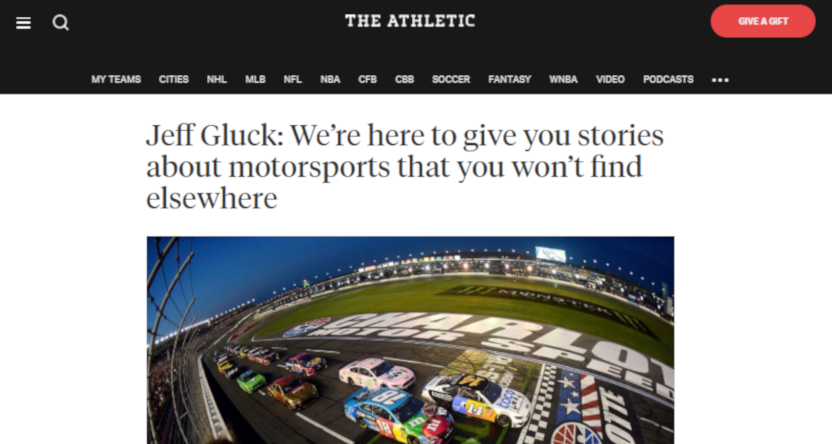 After two and a half years of running his own independent motorsports site, Jeff Gluck has joined The Athletic. And he’s not the only one. The site announced Tuesday (after Adam Stern of Sports Business Journal broke the news) that they’re launching a motorsports vertical, focused on NASCAR at first but with coverage of some other racing events as well (for example, Gluck will be covering the Indy 500 this week). And in addition to Gluck, they’ve hired Jordan Bianchi (formerly with SB Nation) and David Smith (of Motorsports Analytics). Here’s more from Gluck’s intro post about what to expect:

I used to be Jeff Gluck from JeffGluck.com, but now I’m Jeff Gluck from The Athletic. I’ve moved my coverage here from two and a half years of running an independent site and podcast following four years at USA Today, as well as stops at SB Nation and NASCAR Scene.

I’ll be joined by Jordan Bianchi, who you may remember was the person who broke the Matt Kenseth returning to Roush story last year — but promptly became a victim of SB Nation layoffs shortly thereafter (more cuts!). Jordan is an aggressive newshound who I’ve always said could be the next Bob Pockrass if someone gave him the chance — and now he has one.

Then there’s David Smith, who is the NASCAR analytics guru. I’m a huge fan of David’s and have been a subscriber to his Motorsports Analytics website for several years. This guy has an incredible perspective on what’s really going on in the Cup Series because he analyzes races in a way no one else does.

…We think what you’ll spend on The Athletic will be more than worth it. Jordan and I will write features, news, analysis and interviews (like my weekly 12 Questions series, which will continue uninterrupted in its 10th year). David will give you the best in-depth statistical picture of what’s really going on in the Cup Series. And we plan to start a motorsports podcast, which will also be exclusive to this site.

…We even have an editor with a motorsports coverage background. Alison Sneag once worked on RPM 2Night and was most recently at RACER before joining The Athletic. So our content will be in good hands.

As for those who were already Patreon supporters of Gluck, they’re going to receive a free year’s subscription to The Athletic thanks to this move. And he’s winding down his Patreon now that he’s no longer running his own site. The Twitter moves from Gluck and the Athletic’s main Twitter feed Tuesday were also funny:

Who wore it better? pic.twitter.com/935oqAsl60

It’s interesting to see The Athletic launching a motorsports site, and it’s just the latest move from them. They announced a big expansion to their WNBA coverage earlier this week, debuted their video content earlier this month, hired five further full-time soccer writers last month (albeit while cutting several freelancers and some of their team-specific content), and launched a bunch of exclusive podcasts last month as well. And now they’re heading into motorsports as well. We’ll see how much of an audience there is for this, but they certainly have some well-known names on board.