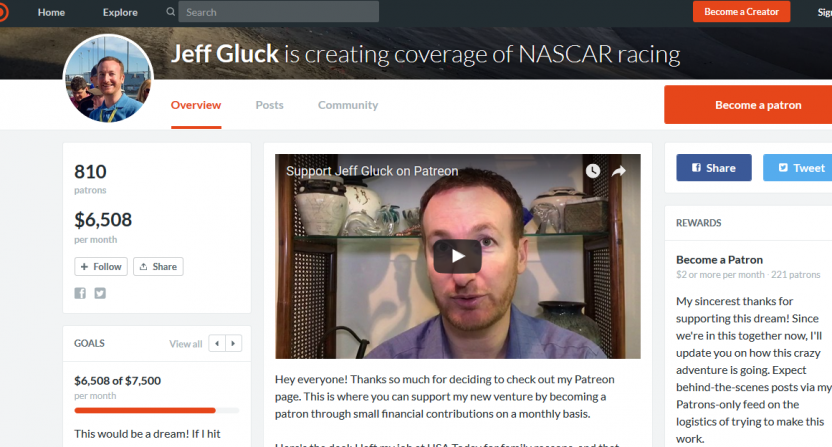 News coverage that’s primarily funded by consumers’ direct payments generally has to be of some interest to a lot of people, of great interest to some people, or preferably both. Sports, and focused sports coverage in particular, might actually have an edge there, and the cases of two sportswriters who have successfully turned to Patreon for crowdfunding of independent coverage may illustrate why. Tony Biassotti wrote a piece on this for the Columbia Journalism Review, and spoke to NASCAR writer Jeff Gluck (we’ve covered his venture before),  Philadelphia 76ers’ writer Derek Bodner, and Patreon co-founder and CEO Jack Conte.

Both writers provided significant insight into how the Patreon model is working for them so far (Gluck currently makes $6,500 in funding a month, which goes towards his travel expenses as well as salary; Bodner makes $4,500 a month, and donates half of it while this remains a part-time job for him). Those are certainly impressive numbers, and their content is clearly finding a receptive audience. Patreon has been a great success for many artists, but it’s rarer to see it in journalism; the cases of Bodner and Gluck might suggest there’s room for it to grow there. However, their most interesting comments may be about why this is working in sports:

Bodner and Gluck are outliers; most Patreon members make a little extra to help them cover expenses or supplement another job. But their success could a model for a certain type of journalist with a deep connection to readers.

Both writers say sports coverage is a much better bet for crowdfunding than, say, city hall reporting. “It requires a connection to your audience, and it think that’s easier to build in sports, and because I’m more of a columnist than a straight beat reporter, that helps too,” Bodner says.

…Bodner and Gluck agreed that owning a specific coverage niche has been important to their success. Compared to football, baseball, or basketball, NASCAR is a regional sport with a small number of full-time journalists covering it. Fans who want good coverage don’t have that many options.

There’s a good point here, and it’s notable that Bodner and Gluck aren’t providing just generic “basketball coverage” or “NASCAR coverage.” Bodner (who previously wrote for SB Nation’s Liberty Ballers blog, Draft Express, and Philadelphia magazine) has a day job as a database engineer, and he’s very fluent in both advanced analytics and NBA prospects, an unusual mix. He had a previous fanbase from his other work, and he’s providing coverage that stands out from what else is being written about the 76ers. Similarly, Gluck was one of the most prominent national NASCAR writers before he turned to Patreon, especially from his time covering the sport for USA Today, and he provides coverage in a way and on a scale many others aren’t doing.

Both writers also have significant access (and the sports’ respective PR people have been smart to maintain that access even as these guys have turned to their own websites) and experience, and they do an excellent job with what they cover. And it’s interesting that both pursued crowdfunding through Patreon (which lets them offer extra content for subscribers, but keeps their base content free for anyone to read) rather than a traditional paywall. As many newspapers have found over the years, a full “walled garden” paywall has the advantage of appealing to the small group that’s very interested in your work, but it can be difficult to maintain, as you can lose a lot of relevance to the larger group that might be somewhat interested. The Patreon model sees Gluck and Bodner’s work supported by the small group (who gain more access and more content as a reward), but still available to the larger group.

This obviously won’t work for everyone, and Gluck and Bodner may be more extreme examples than indications of how others could do this; both cover topics that aren’t covered by everyone everywhere, and both do it in a unique way that provides extra value. However, their comments about crowdfunding sports coverage being easier than crowdfunding hard news ring true. Sports (and particular sports and particular teams especially) has the advantage of drawing out that necessary passion, and people are willing to pay for sports-related items; coverage can be among those, as long as it’s unique and valuable. Not every sportswriter can suddenly go independent and expect to thrive off of Patreon, but it’s working well for these two, and that’s cool to see. It may work for some others, too; the model has significant advantages, and if the content’s good enough and unique enough, it may well find the support it needs.