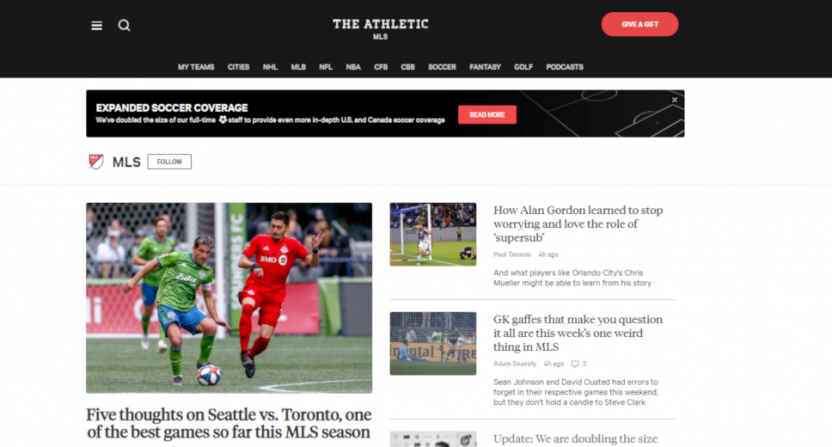 When The Athletic took flak last week after several writers who had been covering local MLS and NWSL teams for them tweeted that they had been told they were no longer needed, the response from a site spokesperson was “We have a big announcement on the way, one that the whole company is very excited about. We’ll be sharing that update very soon.” Well, that announcement has now dropped, but the criticism hasn’t gone away.

The Athletic announced Monday that they’d made several new hires, with that announcement coming in a piece from soccer editor George Qurashi titled “Update: We are doubling the size of our full-time soccer staff.” That piece outlined the hires of Felipe Cardenas, Pablo Maurer, Matt Pentz, Jeff Rueter and Sam Stejskal, and mentioned that those writers will be joining Megan Linehan (hired last week for expanded coverage of women’s soccer, previously worked at NWSL Media) and existing writers Paul Tenorio, Alexander Abnos and Brooks Peck, as well as “the dozens of freelance contributors who cover everything from the Premier League to the art of goalkeeping.” Qurashi also mentioned there that “I’m pretty sure this makes us the largest employer of full-time soccer journalists ever to cover the game here in the U.S. and Canada.” But that piece didn’t outline plans for local coverage, and it led to quite a few critical responses on Twitter to The Athletic Soccer’s tweet announcing the move. Here are some of those:

will you be replacing the Portland Timbers writer you axed last week with another local writer, or relying on coverage from the Seattle-based writer? need to know for subscription renewal purposes. thanks.

So you hired 4 writers that cover MLS teams and got rid of others. How does that help the teams with no coverage?

Some great writers – shame you dropped some local staff last week in order to “double” the next week.

Regional coverage, even with good writers, is not the same as local.

So what are #Crew96 #DOOP and #Timber fans to do? You fired our beat writers

Tenorio responded to some of those critics, arguing that this wasn’t a shift to “regional” coverage. And in doing so, he outlined what coverage might look like under the new system:

I just disagree with this point. We didn't have freelancers for all 24 teams, we haven't eliminated anywhere close to all of our freelancers (most still remain) and we do believe we can provide more and better in-depth journalism covering the American soccer scene.

Yes, Pentz might pop down to Portland. But that doesn't mean me or Sam are going to stop writing Timbers. Yes, Pablo will cover DCU and can easily pop up to Philly. But if he has a great Dallas story, no one is stopping him. If there are good stories, we're going to tell them.

No writer is assigned to any specific subset of teams. I have some PDX features planned. It's not as if Sam Stejskal will stop writing about the Timbers. And yes, Pentz can easily drop into those cities to write, too. But there aren't specific assigned regional teams

I've written features on teams in every type of market in MLS, and we'll continue to do so—only now with seven people telling those stories full-time instead of one.

It may not be one per week for every team in MLS (it never has been, many markets had no freelancers), but it will be more MLS coverage than ever before and more in-depth stories on all teams. I believe the level of our work will justify the changes.

Of course, different coverage has different value to different subscribers. There absolutely may be Athletic subscribers who gain more value from having a wider cast of full-time Athletic writers telling stories from across MLS, rather than the previous arrangement involving freelancers who were more specifically on beats with a variety of teams. (As Tenorio noted, not all teams had assigned freelancers, so the amount of coverage under the previous setup varied from team to team.)

And there may well be people interested in the stories told by these various writers about certain teams and players, even if those writers aren’t regularly covering the team in question. And maybe the loss of subscribers who were there for the previous forms of beat coverage won’t be all that major; The Athletic’s founders have spoken time and time again about how data drives their decisions, so it wouldn’t be surprising if the site has data (on both signups and articles read) that it believes justifies this change. And maybe the old setup wasn’t producing enough results for them.

But this soccer move is interesting, because it seems to be taking a bit of a different approach to what The Athletic has done with many other leagues. A lot of their pitch has been on providing better beat coverage than local newspapers, especially when it comes to NFL, MLB, NBA and NHL teams. And a lot of their focus has been local, with different sites for each city in an attempt to appeal to fans there.

Now, they’ve hired some national voices for coverage of all those aforementioned leagues as well, and they’ve also gone more national in certain areas, especially college football and college basketball. But even those sports have seen attempts to expand the site’s local presence, which makes sense considering that many fans are locked into their particular team and not overly concerned with a wider perspective on the sport. Dialing down existing local coverage from freelancers in favor of more coverage from new national writers is a different move than what the site’s done before, and one that’s worth watching.

And this perhaps speaks to some overall challenges for The Athletic. At the moment, they’re trying a lot of approaches, including a new podcast network and some video efforts, and they have a lot of money to do that after their latest funding round. But their resources aren’t infinite, and expanding to some new areas may mean pruning back elsewhere; that appears to be what’s going on with the soccer moves. And while bringing in new writers and new focuses may appeal to some subscribers, taking away existing coverage also creates some backlash, as we’ve seen from the response to these soccer changes. We’ll see how this works out for The Athletic in the end.

"That's a damn lie. Now I'm not saying Jerry Jones is lying, but don't tell me no one there knew what was going on. Somebody did. That's why they were there. ...You didn't want them to desegregate the school."

"That's a damn lie. Now I'm not saying Jerry Jones is lying, but don't tell me no one there knew what was going on. Somebody did. That's why they were there. ...You didn't want them to desegregate the school."