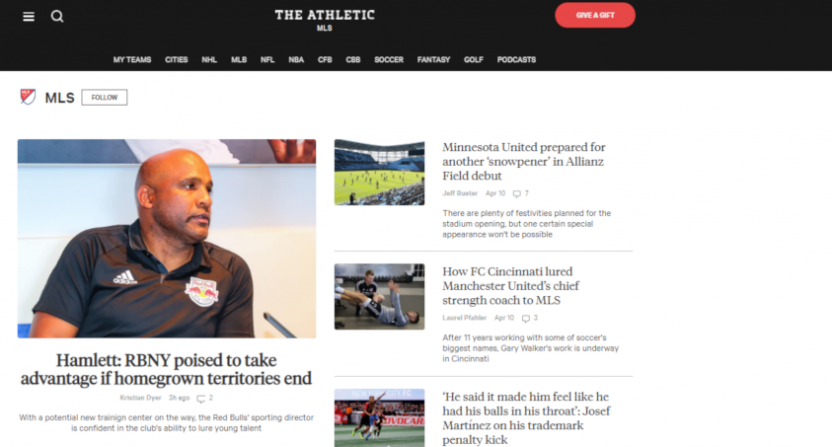 Significant change appears underway for soccer coverage at The Athletic. A few writers who had been covering specific MLS teams for the site have tweeted about being told they’re no longer needed, and added some comments that the site may be moving to regional MLS beat writers rather than team-specific ones:

Sorry Timbers and Thorns fans. My writing will be at The Guardian, Yahoo Sports, The New York Times, Goal and hopefully more – always looking for new writing opportunities. I’ll be in France for The Guardian covering the #USWNT. And my book is out now: https://t.co/doCdQeaqg3

For those asking, I was told they're moving to regional writers hence local beat writers announcing that they aren't writing for The Athletic anymore. Portland, Seattle and Vancouver will be in one coverage area together. I already have plans to cover Portland for another outlet.

Hey #Crew96  fans, it’s been great writing for the Athletic, but the site is headed in a different direction. I may pop up on other sites occasionally, but I’ve been informed my services are no longer needed there.

Related: If you know of any writing gigs, please keep me in mind

Sounds like they believe a “regional” writer can do the job.

They did indeed. Pour one out for my guy @sportsdoctormd, who won an award for them.

But this comes in the same week where The Athletic announced the hire of Megan Linehan as a women’s soccer staff writer, and promised to cover women’s soccer “from every angle, and on the merits of the game itself” both around the World Cup this summer and beyond that. And that announcement saw other tweets noting that further soccer hires were likely coming:

Also… safe to say that The Athletic is not done hiring soccer fulltimers. The extent of the investment is impressive, esp considering that many other comparable outlets are treading water or outright downsizing… ????

Asked for comment on the soccer changes, an Athletic spokesperson told Awful Announcing “We have heard the concerns that subscribers have about changes to our coverage. We have a big announcement on the way, one that the whole company is very excited about. We’ll be sharing that update very soon.” Athletic Soccer editor George Quraishi also used similar language on Twitter:

Hey everyone, I see the concerns about changes to our coverage. We have a big announcement on the way, one I’m very excited about. More on that soon.

We’ll see what comes of that announcement.