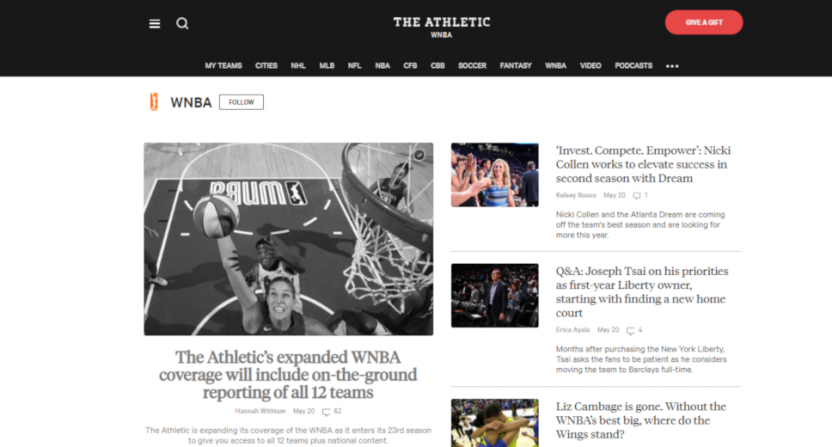 The Athletic is going to be providing significantly more WNBA coverage this season, staffing up with a beat writer for each team. The site announced that move Monday in a note from their WNBA editor Hannah Withiam. Here’s the key part of that:

As the WNBA enters its 23rd season, The Athletic is expanding its coverage to give you on-the-ground access to all 12 teams. Our local beat writers will bring you onto the court and into the locker rooms and front offices, while our national reporters will look at the league from a bigger-picture perspective. You’ll get the same approach to storytelling that we have brought to other sports. We won’t just tell you what happened, we will dig into why and how it happened. We will aim to provide in-depth analysis, to surround the game both on and off the court and to surprise you.

The world-class players balling out from May through October? Let’s hear their stories.

Collective bargaining between the league and the players? Let’s pull back the curtain.

New commissioner Cathy Engelbert? Let’s get to know her and her vision.

This is interesting on a number of levels. For one thing, The Athletic has often been criticized for being primarily white and male; it’s certainly notable that they’re not just devoting this kind of coverage to the WNBA, but that they’ve hired women to do it. And they’ve brought in quite a few prominent people here; everyone on this list has a notable resume, but a few already on the radar here include Hendricks (previously with Yahoo, For The Win, and NBC Chicago, she now also works for Chicago’s 670 The Score), Gibbs (who’s produced quite a few prominent pieces at ThinkProgress and co-hosts the Burn It All Down podcast), Ayala (known for her coverage of women’s hockey and women’s soccer, including with the The IX newsletter), and D’Arcangelo (she’s written a number of books and features, including for The Athletic Buffalo).

Beyond that, it’s certainly notable to see The Athletic up its coverage to have a beat writer for each team in the WNBA (plus two national writers), as that’s a different tack from the other recent moves we’ve seen from them. Specifically with men’s soccer, April saw them actually cut ties with a number of freelancers covering individual MLS clubs. And while they went on to hire more full-time writers, they don’t have anyone assigned to cover each MLS team.

Now, that’s not necessarily “The Athletic has decided that the WNBA is worth more coverage than MLS,” as the site approaches different sports differently. For example, while they’ve added a lot of college football writers, there are still some big programs without a beat writer, and some of the resources there have been put into hiring national voices. We also don’t know how regularly these beat writers will be writing for the site, and it’s notable that a number of them have some pretty significant other jobs.

But bringing in a dedicated writer for each WNBA team is still a substantial investment. And key Athletic figure Paul Fichtenbaum is on record saying focusing on underserved markets has paid off for them. So it may well be worth it for them to invest heavily in WNBA coverage, where they have fewer competitors than in many other sports. There are quite a few passionate WNBA fans out there, and with this kind of full-court press to cover the entire league, The Athletic may be able to get a number of them to subscribe.

This is interesting, though, as it’s a bit of a shift from the initial strategy we saw from The Athletic. A lot of what they did at first was setting up local sites and competing directly with the newspapers in those markets, hiring beat writers for the NFL, NBA, MLB and NHL teams. But their recent moves have seemed more focused on some different approaches, including launching a number of podcasts, expanding their video content, and shaking up that soccer coverage.

And the WNBA strategy fits with that, and is perhaps even bolder than any of those previous moves. It’s not as much The Athletic competing with the media coverage that’s out there (there’s some local WNBA media coverage, especially in certain markets, but it’s not always a lot, and there’s not a ton of national coverage of the league) as it is them staking a claim on a league, and hoping that that league’s fans will subscribe as a result. We’ll see how that works out for them.