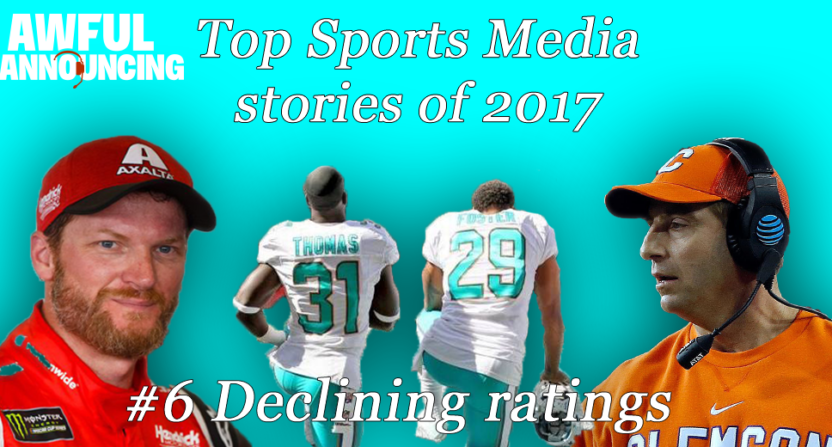 When the topic of “sports ratings” comes up these days, the main point of conversation inevitably turns to the NFL’s declining ratings, a trend that started during the 2016 season and continued (in earnest) through the 2017 season.

The drops for the NFL’s viewership is also not limited to regular season games – pregame show viewership was down on most networks in 2017, the Super Bowl was down from a year ago (but still drew a monstrous number), and eight of the league’s ten playoff games in January before the Super Bowl were also down.

But the NFL isn’t the only league to take ratings hits this year. NASCAR’s audience has been getting pared down over the last decade, reaching a stunningly low level in 2017. College football also slid back a bit in 2017. MLB and NBA ratings stagnated on local RSNs this season, and the results on a national level were a mixed bag (though both the World Series and Finals shined in 2017).  The NHL took a hit in half of its American markets, and also on a national level for NBC. The Premier League took a step backwards on NBC after seeing positive growth following its switch to the peacock in 2013-14. USMNT matches were down 15% as well amidst an absolutely disastrous year on the pitch.

However, some sports saw ratings increases this year. In addition to the strong performances put forth by the 2017 World Series and NBA Finals, this year’s NCAA Tournament was way up from last year. In the early going of this year’s NBA season on ESPN, viewership was up 24%. At least one league-specific network also showed an increase, with MLB Network putting together their best-ever Postseason and most-watched year ever in 2017.

Eventually, something is going to have to give. If ratings continue to decrease while rights fees continue to increase, networks aren’t going to renew rights deals for those leagues when they expire – or at the very least, not renew them at a higher rate. We saw this a couple of years ago with the International Champions Cup preseason soccer tournament, which both Fox and NBC passed on, leading to ESPN picking up the rights for far less than what the ICC was looking for.

The problem with a lot of these rights deals is that they don’t expire for years down the road – the only major rights deals up in the next year are Thursday Night Football (which the NFL has been negotiating shorter term contracts for), the UFC, WWE, and Indycar. Some companies, for example, UFC and WWE, have their own streaming platforms and could make moves to bring even more live, original content to those platforms, even though they’d end up losing millions on their upcoming rights deals. College conferences are also looking in the mirror at what to do when their rights deals expire, wondering if being a small fish in a big pond is worth it.

We’re also going to learn more about viewing habits about consumers in 2018. Gone are the days where watching live on TV is the sole option for consuming sports – fans often stream games on devices and watch them at bars, two areas that Nielsen is frantically trying to measure accurately. If they’re able to do that, maybe networks can take some solace in the fact that the ratings decreases in many sports aren’t as drastic as they once assumed.

There is no one answer for *why* ratings are dropping. Every sport and every network has a different batch of reasons. But with more options to occupy fans’ times than ever before, leagues and networks cannot take their viewers for granted. These aren’t the days where viewers only have three networks to watch. If someone doesn’t watch to watch what is on for *whatever* reason, they have a near-endless amount of options, from on-demand streaming content to oodles of live networks, not to mention non-TV/movie content.

Fans aren’t going to be told what to watch and when to watch it. If a network puts a terrible game on national television at the same time my favorite team is playing, there’s no chance in hell that I’m going to watch the “easy” game – I’m going to jump through whatever hoops I need to in order to watch my team. If there’s a game I have no interest in airing in an exclusive window, I’m not going to watch it just to watch it – I can occupy my time with something I actually enjoy. And I believe plenty of fans feel that way, leading to fandom of specific sports or leagues falling off in favor of fandom of certain teams.

That could be the biggest challenge for networks and leagues going forward – turning an Angels fan into a fan of the Angels *and* MLB as a whole, or turning a Bulls fan into a fan of the Bulls *and* the NBA. If a fan is only going to watch their team and not the “best” games, leagues and networks could soon find themselves in a situation where they’re no longer marketing themselves nationally and need to reevaluate how to capture fans.