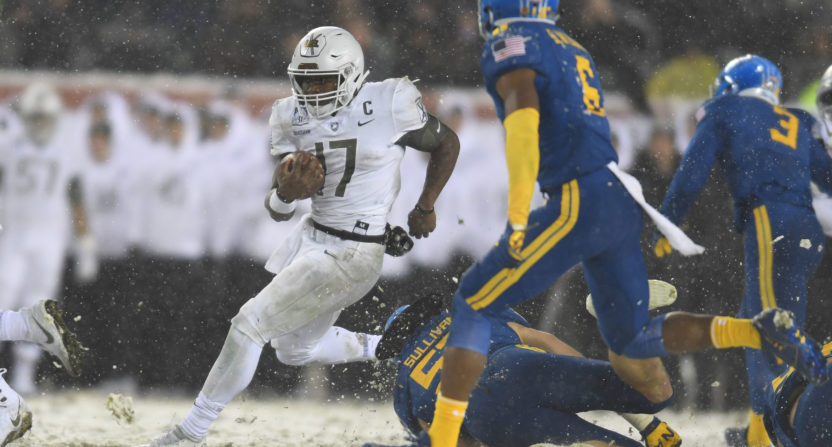 Unlike the NFL, where you have three windows on Sunday and individual windows on Monday and Thursday nights, there are multiple windows for college football and games are spread out throughout the week. However, in looking at the numbers for ABC/ESPN, CBS, and NBC, viewership (for the mostpart) was down, while Fox and FS1 were up.

The increases for Fox and FS1 can be directly be attributed to the addition of the Big Ten to its existing inventory of Big 12 and Pac-12 games.

According to Austin Karp of Sports Business Daily, the numbers for the networks look like this:

The SEC on CBS was the most-watched package for the ninth straight season, but viewership was the lowest in over a decade.

Saturday Night Football on ABC was the most-watched window with 5.7 million viewers, but that was down 4% according to Karp.

Viewership totals for BTN, SEC Network, and Pac-12 Networks were not available.

As for this weekend, CBS saw a 5.9 overnight rating for the Army-Navy game, up 5% from last year and Sports TV Ratings says that was the best number since 1994.

The Heisman Trophy on ESPN was mainly an afterthought, mainly due to the lack of suspense in the voting.

Fox and FS1 certainly picked up where ABC/ESPN lost, but certainly the Worldwide Leader doesn’t need any sympathy. Their networks had their share of big games this season despite not having Ohio State-Michigan and other glamour Big Ten matchups. ESPN was still able to tap into the ACC, Big 12, Pac-12 and SEC as well as some less marquee Big Ten games.

Karp told SI’s Richard Deitsch that interest in college football hasn’t waned, but some of the minor conferences that aired on ABC/ESPN just didn’t draw eyeballs. Plus, there were some blowouts on the schedule for all networks:

“For CBS, the SEC was just too top heavy this season,” Karp continued. “They had some bad matchups on the network. Alabama is still a draw, but there is a limit on the number of Alabama games the network can air, and Georgia-Florida or any Tennessee game just aren’t what they used to be. For NBC, Notre Dame fans just didn’t watch early in the season, expecting some sort of repeat of 2016’s debacle. But NBC saw improvement over the last three game telecasts. I’d say college football fans were winners this season. There are options galore on TV, and that doesn’t even include improvement on the streaming front. Networks like CBS and ESPN need to see improvement from some big-time programs like Texas, Tennessee, Florida, Nebraska and maybe even an Oregon. That would increase the availability of bigger games for those networks.”

Despite some lower numbers, college football is still a draw and it’s a major reason why networks pay a premium to carry conferences like the Big Ten.