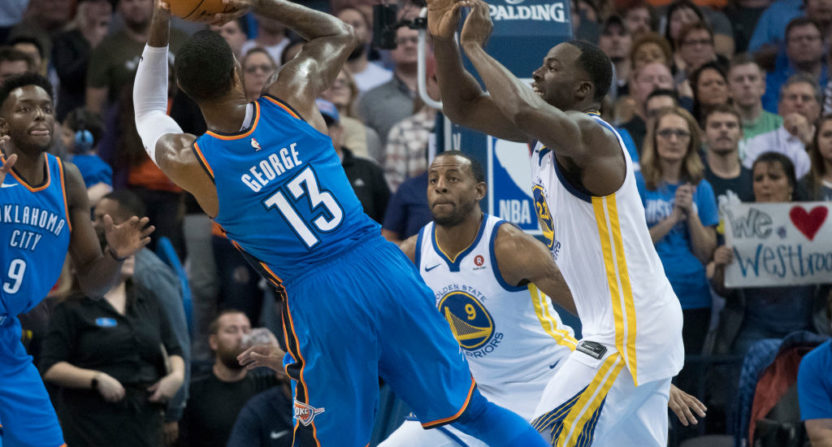 As the NFL deals with a seemingly endless succession of bad TV ratings news, the NBA seems to be cruising merrily along.

On Tuesday, ESPN announced that its national NBA package is averaging 1.92 million viewers through 19 games this season, up 24 percent from this point last year. Last week’s Warriors-Thunder matchup, in which Russell Westbrook and OKC defeated Kevin Durant and Golden State, averaged 3.282 million viewers, making it the most watched regular-season game on ESPN since last Christmas.

Now, we should note that 19 games is not a very large sample and that much or all of the ratings bump could owe to the quality of the games the network has aired. Local ratings last season were actually down from 2015-16, and NBA Finals ratings dropped slightly as well. Still, in a climate of cord-cutting, with sports and non-sports properties alike losing viewers en masse, the NBA has to feel pretty good about any ratings data that suggests an increase — even if it covers only a month of action.

The natural comparison point here is the NFL, which has seen its ratings drop for the second straight year, sparking a cottage industry of guesses as to why that is. Though it’s difficult to pinpoint the precise cocktail of factors in the NBA and NFL’s divergent fates, the NBA certainly hasn’t faced the same wave of controversy the NFL has. While NFL storylines have involved bickering owners, rampant injuries, risk of brain damage, the alleged blackballing of a former star and, most importantly, low quality of play, NBA storylines have mostly focused on the court, where exciting teams and ascendant players are making for another enjoyable campaign.

In a time when sports ratings have become bizarrely politicized, many observers will likely try to spin the NBA’s sturdy viewership in support of their ideology about athlete activism. Some will say fans watch the league because players don’t protest during the national anthem, which won’t make much sense given how outspoken many stars have been about police brutality and racial discrimination. Others will say the NBA’s ratings are proof that fans will watch a league whose players speak freely on social issues, which might be true but doesn’t lend much insight into the NFL’s predicament.

The truth is the NBA and NFL are different leagues with different values, different audiences, different advertisers, different TV partners and therefore different factors that drive ratings. The NBA has a highly appealing product with tons of stars, several must-watch teams and numerous compelling storylines. The explanation for the league’s strong ratings really might be as simple as, the NBA is a whole of fun right now.