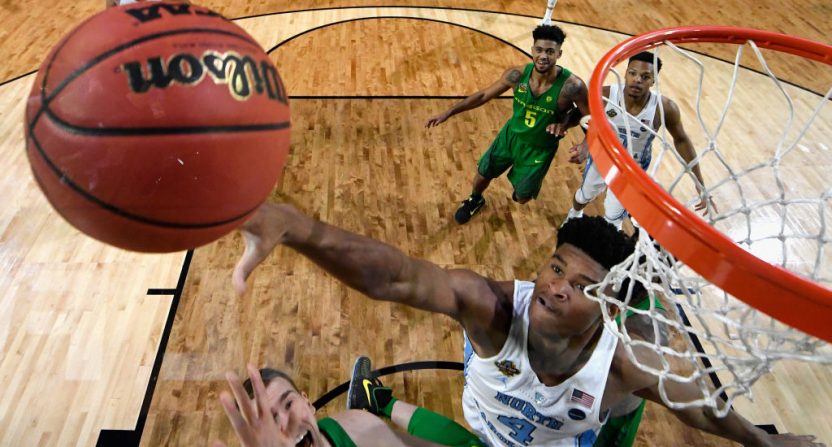 The upward momentum for the 2017 men’s NCAA Tournament for CBS and Turner Sports continues. With Saturday night’s two games decided by a combined total of five points, CBS enjoyed a ratings resurgence for the Final Four seeing a a 37% increase in the overnights from last year. In 2016, the Final Four on TBS experienced two blowouts and they were decided by a total of 61 points.

The overnight rating for the Final Four on CBS was a very good 10.4/21 which is the highest average number for the event since the CBS/Turner partnership began in 2011.

The Gonzaga vs. South Carolina game averaged a 9.3/20 overnight rating/share in the early slot. That was up 31% from Villanova-Oklahoma last year. As the game got tight in the last ten minutes, the rating peaked with a 12.7/25 between 8:15 and 8:30 p.m. ET.

The nightcap between North Carolina and Oregon was an aesthetics nightmare, but still drew an 11.5/21 rating, up 42% from last year’s North Carolina-Syracuse debacle. And the game tied for the second-highest rated late Final Four contest since 1998.

UPDATE: The viewership numbers are out. Gonzaga-South Carolina averaged 14.7 million viewers up 40% from last year. North Carolina-Oregon saw an average viewership of 18.8 million up 46% from 2016’s late game. The average for both games was 16.8 million and that makes it the second most watched Final Four since 1998. And the average viewership for the entire tournament is 10.4 million which is the second most-watched since 1994.

As for the online portion, March Madness Live saw 5.2 million live streams for the Final Four which is up 84% from the year before.

So CBS/Turner continues to see good numbers for the tournament in 2017. With two number one seeds in North Carolina and Gonzaga meeting in the championship game on Monday, there’s no reason to believe that CBS will see yet another increase from last year’s North Carolina-Villanova buzzer beater.