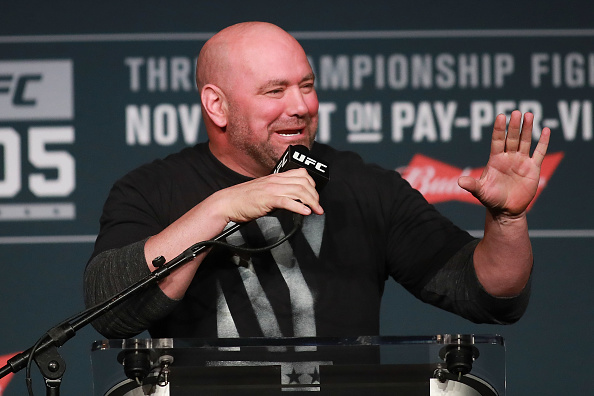 The UFC’s television contract with Fox expires next year, and there’s been plenty of speculation about where their non-pay-per-view fights might end up. Showtime has been mentioned as a potential destination, and UFC president Dana White has spoken about perhaps getting streaming services involved. That may well be necessary (at least in bidding) if they hope to meet their projections of $450 million annually in non-PPV media rights revenue, which would be a big hike from the current $120 million they receive (on average) each year from Fox.

But the UFC may have a hard time reaching that goal, as John Ourand reports in Sports Business Journal that broadcasters aren’t offering anywhere near what the organization is asking for so far:

The UFC’s seven-year deal with Fox ends next year. The current Fox deal is worth an average of $120 million per year, with the fee jumping to $160 million in the final year of the deal, sources said.

Fox allowed its exclusive negotiating window to lapse early last month without submitting a formal bid. Sources say the two sides would like to continue their deal, but as of now are far apart in price. Fox Sports President Eric Shanks told Endeavor CEO Ari Emanuel and co-President Mark Shapiro that Fox was prepared to make an offer worth around $200 million per year, less than half of the $450 million per year average the UFC wants.

Talks between the two are ongoing. Shanks has remained in steady contact with Emanuel and Shapiro, sources said.

Executives with CBS, ESPN, NBC Sports and Turner Sports took the UFC’s meetings over the past month, during which UFC executives presented a deck outlining the growth of the UFC and justifying why its media rights should increase.

Turner Sports executives showed the most interest in a potential deal, sources said. But uncertainty over the pending AT&T-Time Warner merger, which currently is experiencing trouble as it moves through the Justice Department, has dampened enthusiasm for a UFC deal. A merged AT&T-Time Warner could let DirecTV handle the UFC’s pay-per-view, AT&T oversee UFC’s mobile apps and Turner use UFC content on its channels and OTT platform.

It’s interesting that the Justice Department roadblocks to the AT&T – Time Warner deal may wind up impacting the UFC’s media rights, but that makes some sense. As Ourand notes, the UFC is perhaps more compelling for a combined company than it is for Turner alone, as there are synergies with AT&T and DirecTV. And beyond that, with plenty of questions about the future of the Time Warner unit as a whole thanks to the delay of this acquisition, Turner may not be too eager to make big, splashy moves until they know more about what their corporate structure will look like going forward.

Now, it should be noted that there’s still time here; there’s a year left on that Fox deal, and the AT&T – Time Warner situation is quite fluid, with many speculating that AT&T could eventually win in court if it came to that. So Turner may still wind up being a player in the UFC negotiations, and while their presence alone may not drive the deal up to the desired $450 million annually, having more serious bidders should raise the price at least a little. At the very least, though, the AT&T – Time Warner delay seems to have put a damper on UFC negotiations here.

There are other factors possibly weighing these rights down, too. One is that it’s not clear yet what the streaming services situation is; the UFC has met with digital companies like Amazon and Oath (the Verizon-owned company that’s combined AOL and Yahoo), but it’s not yet specified if they’re angling to sell those companies a full broadcast package like what Fox had a separate carved-out package (and if the latter, what content that would take away from the broadcast deal). And that speaks to a larger potential concern for broadcasters; the UFC’s broadcast fights have often underwhelmed in interest and ratings thanks to many of the top fighters being regularly put on pay-per-view, so broadcasters have to be curious about just what level of UFC content they’re getting and what kind of guarantees they’ll have there.

Complicating matters is the fact that WWE’s rights are up in the fall of 2019. WWE’s scripted programming and audience makeup is much different than the UFC’s. But a channel like FS1 could look at WWE as acceptable replacement programming in case it loses UFC rights.

The meeting was part of a WWE road show where it spoke with various networks, including CBS and Disney, plus digital companies like Amazon and YouTube to show the power of its programming.

Because WWE’s exclusive negotiating window with NBC doesn’t end until the spring of 2018, they did not negotiate contract points or talk about rights fees. WWE will make around $180 million from its NBC deal in 2017.

As Ourand notes there, it’s not that WWE’s programming or audience is exactly what the UFC has, but there is some crossover between the properties. And that makes it particularly notable that they’re coming to market at a similar time as the UFC, and talking to many of the same players, both in the traditional broadcast realm and in the digital space. There aren’t a ton of other big sports rights coming to market any time soon, so both of these companies could wind up doing quite well despite that, especially if they manage to get the streaming companies involved.

But it’s easy to see some of these players being okay with landing either the UFC or the WWE, and that could reduce the pressure (and thus, the bidding) for either. We’ll see how it all plays out in the end, but for now, it looks like those $450 million projections from the UFC may be pretty optimistic.