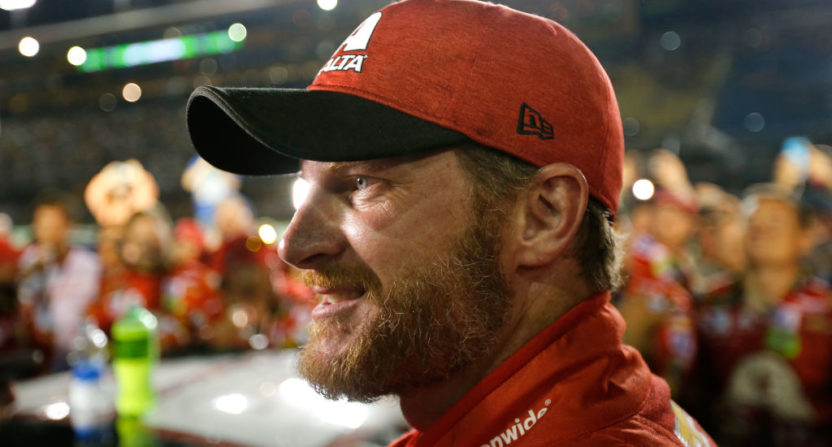 Declining NFL ratings have received quite a bit of coverage over the past few years, but ratings drops in NASCAR have flown a little more under the radar. They’re not as easily tied to narratives of anthem protests or Twitter fights, but they’re perhaps just as concerning for the sport, especially when factored into other changes going on in the racing world. The latest bad ratings news for NASCAR comes from the season’s final race at Homestead Miami Speedway Sunday. Many thought it might do decently, especially as it was Dale Earnhardt Jr.’s final race, but the ratings declined significantly year-over-year:

Of course, there are some other elements to consider with that particular race. Stern, Sports Business Journal‘s motorsports reporter, noted that NBC is citing this year’s race ending earlier as a contributing element:

.@NBCSportsPR notes that last year’s Homestead race ended at 7:15 while this year’s race finished about 30 minutes earlier, at 6:44. The closer a race pushes toward or even into primetime, the more viewers it will typically pick up. The 2015 race went all the way to nearly 8:30.

But this is part of a season-long trend of declining NASCAR ratings. The year started off poorly, and it hasn’t gotten better, with low ratings continuing through the summer and fall. And the demographics aren’t good, with NASCAR fans skewing older in a SBJ study this summer that found the average NASCAR fan watching on TV in 2016 was 58, the third-oldest in the sports considered, younger than only the PGA Tour and the ATP tennis tour, and with the worst change (+ nine years) since 2006. 22 of 29 Sprint Cup races were down last year, and many dropped again this year. Oh, and this is just part of a decade-plus slide in the ratings:

So there are big concerns ahead for NASCAR. And broadcasters NBC and Fox have reportedly been pushing NASCAR executives to make some moves, from breaking races up into stages to moving some races away from competing with the NFL on Sundays. Many have previously argued that NASCAR should get away from that head-to-head competition, whether that means ending the season earlier or moving some races to midweek. And that pressure might further increase following the retirement of Earnhardt Jr., who has won  NASCAR’s Most Popular Driver Award 14 straight times and is likely to pick up his 15th soon. He’s not the only major departure, either; plenty of other big names have exited recently, and that’s likely causing some of the problems, as Drew Lawrence writes at The Guardian:

Like the NFL, Nascar can’t trace its decline back to a single source. Certainly the global financial crisis, which hit the automotive industry especially hard, didn’t help. Nor has Nascar’s compulsion to change its rules, especially the ones the define how its championships are won, on a whim. Worst of all, the sport can’t seem to stop hemorrhaging star drivers. Two years ago it saw the retirements of Jeff Gordon (a five-time series champion), Tony Stewart (a three-time champ) and Carl Edwards (an oft-snakebitten contender). This year Matt Kenseth (the 2003 series champion), Dale Earnhardt Jr (Nascar’s most popular driver) and Danica Patrick (its iconic female trailblazer) will call time. Many of the drivers racing in their stead are young and lightly experienced. The hope is that this will appeal to millennial viewers, a demographic Nascar struggles to attract. A recent entitlement pact with Monster Energy – which has brought, among other things, its caffeine-stuffed drinks and sexually charged brand ambassadors to the track – has done little to alter that fact so far.

And it should be noted that not all of those drivers are really leaving on their own terms. Kenseth was largely pushed out by Joe Gibbs Racing giving his spot to younger driver Erik Jones, and Patrick announced in September this was her final season with Stewart-Haas Racing and recently said this will be her final season as a full-time driver (she plans to run in the Daytona 500 and the Indy 500), something that also seems partly about sponsorship and team interests. Plenty of others are leaving or shifting around, too, and that doesn’t seem likely to help the ratings woes. Overall, NASCAR has lost a lot of big names, has lost a lot of viewers, and has seen its viewership age dramatically. None of that seems very promising for the sport’s future as a TV property.