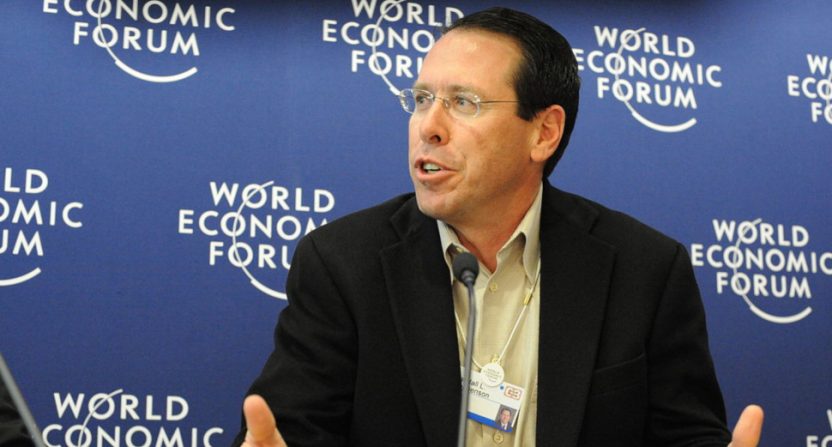 There’s been a lot of discussion recently about what’s next for the NFL Sunday Ticket package, as the league has the ability to opt out of its deal with DirecTV after the 2019 season and has recently indicated they’re at least interested in looking at a streaming option (perhaps DAZN?) in addition to the satellite one. Meanwhile, from the AT&T and DirecTV side, DirecTV has amended its user agreement to indicate that they may not be able to keep offering the package and decided not to hike Sunday Ticket prices this year, and the recent removals of NFL Network and NFL RedZone from DirecTV Now and AT&T U-verse (and the NFL’s complaints about being blindsided there) have raised further questions about the overall NFL-AT&T relationship.

However, as per Todd Spangler of Variety, AT&T CEO Randall Stephenson said on the company’s earnings call Wednesday that they believe they’ll be able to keep Sunday Ticket exclusively on DirecTV:

AT&T believes it will hang on to DirecTV’s exclusive rights for the NFL Sunday Ticket, even as the league has said it’s considering ending the satellite operator’s exclusivity to extend the out-of-home games package to streaming platforms.

“The exclusivity [of Sunday Ticket] should remain as we go forward on DirecTV,” AT&T CEO and chairman Randall Stephenson said on the company’s Q1 earnings call Wednesday. “We’re heavily invested in the NFL on DirecTV.”

Of course, just because one side says something doesn’t mean that’s going to happen, especially when it’s not the side that seems to hold the power at the moment. The opt-out ability rests with the NFL, and there could be a whole lot of suitors for this package if they do decide to opt out (or at least opt out and then negotiate a satellite-only deal with DirecTV and a streaming deal with someone else).

But it’s certainly interesting that Stephenson is so confident here despite the recent comments from the NFL side. And that puts this situation back towards what it looked like in December; Sports Business Journal‘s John Ourand predicted then that the package would stay with DirecTV and wrote that “There appears to be little appetite inside league offices to move away from a partner that it has had since 1994.” But March saw NFL commissioner Roger Goodell praise DirecTV and AT&T while saying “We’ve had a 25-year partnership and we want to continue that partnership, but we also are looking to see how we can change the delivery” and “We want it delivered on several different platforms,” and that seemed to raise the odds of an opt-out.

Yes, “several different platforms” could be all within the AT&T corporate umbrella (maybe even on a service like B/R Live), and they do currently offer a streaming version of Sunday Ticket. But at the moment, that’s only offered to college students and people who live somewhere where DirecTV satellite service isn’t available. And AT&T’s emphasis on their DirecTV unit and Stephenson’s comments about the exclusivity remaining with DirecTV make it sound like they’re not heavily considering also offering a streaming version of Sunday Ticket to a wider audience.

It’s also worth considering just what happened with U-verse and DirecTV Now dropping NFL Network. That ticked off a lot of people and caused some to switch providers, especially with it coming close to the NFL Draft. And the way it happened seemed to ruffle some league feathers as well, with the NFL releasing an unusually harsh statement of “Unfortunately, as it pertains to AT&T, we never heard a word from them until NFL Network and NFL RedZone were pulled from the AT&T U-Verse and DTV Now services.”

Maybe that won’t mean anything for the DirecTV/Sunday Ticket talks; there are plenty of cases of big companies disagreeing on one interaction between some of their units while still partnering in other areas, and NFL Network and RedZone are still available on DirecTV proper. But the NFL has a significant history of pushing back at rights partners over criticisms well outside the scope of rights deals; some past history to consider there includes the end of the ESPN/PBS partnership for concussion documentary League of Denial, the discipline and other personnel moves involving various NFL critics at ESPN (including Bill Simmons, Jemele Hill, and Michelle Beadle amongst others), and the removal of Bob Costas from a NBC Super Bowl broadcast. And, on that front, it’s interesting that Stephenson used this earnings call to drop a bunch of criticisms of NFL Network:

“When you look at the NFL Network, there are some costs attached to that,” Stephenson said. He added that many of the games on NFL Network as well as its coverage of the NFL draft are available on other network, so “the NFL Network didn’t really make sense to carry” on U-verse and DirecTV Now. The NFL Network remains on DirecTV’s satellite service.

On one level, Stephenson has a bit of a point there. The expansion of Thursday Night Football on Fox means there are only three games currently scheduled as exclusive to NFL Network this season (although a pre-Christmas doubleheader or tripleheader is expected), and the matchups in those three games are by far the weakest of the national schedules. And that’s a tradeoff for the NFL with putting more TNF games on network TV; that brings in a whole lot of money ($550 million each year for five years in the most recent Fox deal), but it lowers one of NFLN’s carriage arguments.

However, saying NFL Network “didn’t really make sense to carry” may be a bit of a stretch, especially when it comes to that comment about draft coverage. That was the case last year when NFL Network’s coverage was simulcast on Fox, but it’s not the case this year; yes, ABC and ESPN are also carrying the draft, but there are plenty of people who will choose NFL Network’s coverage over ABC’s College GameDay meets American Idol approach and ESPN’s lineup of Trey Wingo, Louis Riddick, Booger McFarland, Chris Mortensen, Adam Schefter, and Suzy Kolber.

Also, there are still those exclusive games to consider. And there are a lot of people who like NFL Network even when it’s not the draft or a live game, whether that’s for Total Access, Good Morning Football, NFL Films content, or something else; that was shown in a lot of the complaints about the U-verse drop. But beyond that, even if Stephenson doesn’t think NFLN “made sense to carry,” it’s interesting that he’d so publicly criticize the NFL’s network while trying to keep his Sunday Ticket deal with them.

It’s also worth noting that Stephenson’s comments here come after substantial subscriber loss for AT&T U-verse, DirecTV and DirecTV Now. As per Spangler, they lost 544,000 subscribers in the first quarter for U-verse and DirecTV, and lost another 83,000 at DirecTV Now. Sunday Ticket has long been seen as one of the key drivers for DirecTV, so keeping it may be very important to them.