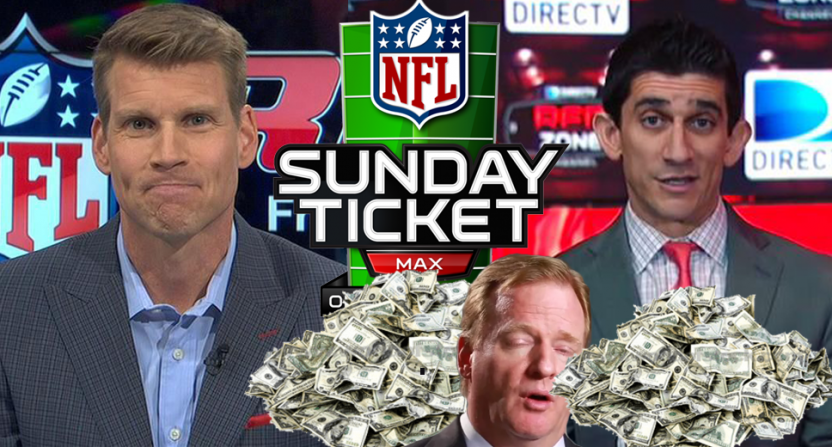 The NFL is reportedly considering plenty of angles as they determine what to do with their DirecTV Sunday Ticket pay-per-view agreement. That deal runs through 2022, but as we covered last month, the league could opt out early, a move that would take effect after the 2019 season.

Sports Business Journal’s Daniel Kaplan reports today that the league’s original deadline was this fall, but the league and DirecTV agreed to move the decision to next spring. The reason: data-gathering, specifically on streaming.

The NFL and AT&T, the owner of DirecTV, quietly agreed over the summer to move back the league’s option to end the deal early from this fall to next spring. As part of that agreement, the league allowed DirecTV to stream Sunday Ticket in seven markets: Boston, Hartford, Los Angeles, Louisville, Philadelphia, Phoenix and San Antonio, said a source familiar with the deal.

The NFL wants to analyze how much demand there is for offering games digitally rather than just through satellite before making its decision. With the option originally available in the fall, the league decided it did not have enough time to make an informed choice.

“It was less a value conversation,” the source said of the decision to postpone the option period, “and more of a calendar-like pragmatic decision on when we would get the [streaming data].”

That last part is the key, and it makes sense. Had the NFL opted out last fall, it wouldn’t have taken place until after next season anyway, so why not take advantage of another year of data? Given how quickly viewing habits can change, the most recent data is always the most relevant, too, especially when it comes to streaming. One obvious reason that’s a consideration: the league could be looking to split up the package into linear and digital rights in an effort to increase the overall revenue.

The league is already streaming its Thursday night package on Amazon, while broadcasting it on Fox. And this year, in-market games are available for mobile streaming on any cellular carrier. That’s why experts expect the league to perhaps split the digital and satellite packages.

The NFL considering opting out is interesting, given that it’s a guaranteed $1.5 billion a year, but it seems plausible that the league would be able to do better, as the streaming side of the rights are theoretically more valuable now, whether they’re spun off or not.

This is also a sign the league realizes the need for change, which is a positive sign as the Sunday Ticket package has been in desperate need of a refresh, as we pointed out in September. It’s way too expensive in its current form, and there are more ways than ever to cheaply watch Red Zone, including and maybe especially as a second screen on mobile.

The league has continued to emphasize no decision has been made, but even if they want to continue their partnership with DirecTV, it seems like opting out to explore the market and increase their negotiating leverage is probably going to happen.