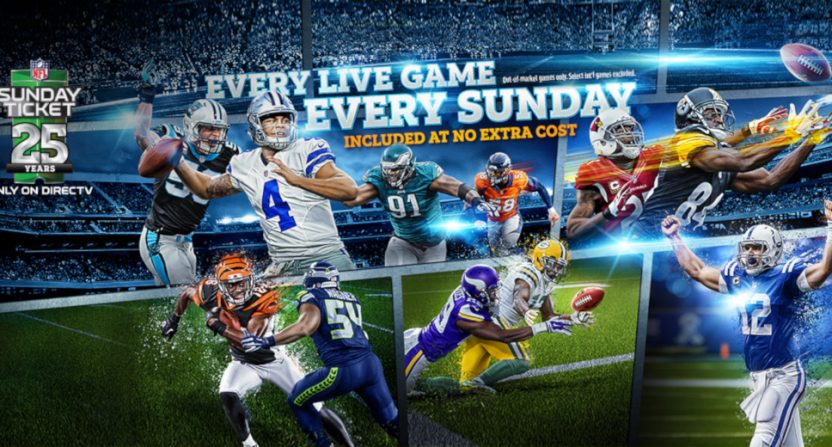 We’ve covered the fluid situation of DirecTV’s exclusive deal with the NFL for Sunday Ticket since it was first reported that the league could opt to end the arrangement after the 2019 season, although at this stage that appears to be unlikely.

But it’s still not impossible, and for the first time, DirecTV is acknowledging this within their promotional language to users, as noted by TV Answer Man. It makes sense, as the satellite provider is locking customers in for two years in part by promising Sunday Ticket as a part of the overall selection of programming. The agreement now reads like this:

As TV Answer Man notes, this was not the case until now:

This is in contrast to the language in the terms of agreement for past seasons. For instance, in 2018, the language simply stated: “(NFL Sunday Ticket) Subscription renews automatically each season at then prevailing rate unless you call to cancel prior to the start of the season.”

There was no reference to whether the NFL Sunday Ticket might not be available in future seasons.

So, is there anything to this at all? That’s tough to discern from the outside, but the best guess is: sort of? If DirecTV (and by extension, corporate parent AT&T) knew they had things locked in going forward, there would clearly be no need for this amendment, much less the bold-faced type. The inclusion, though, also doesn’t mean an opt-out is likely, just that it’s possible, and if an outcome is possible it tends to get addressed in user agreements and fine-print, especially when two-year contracts are involved.

That puts this more in the “file it away” category than the “breaking news” category, but we are discussing a billion-dollar property here, so any update has the potential to be a big one.