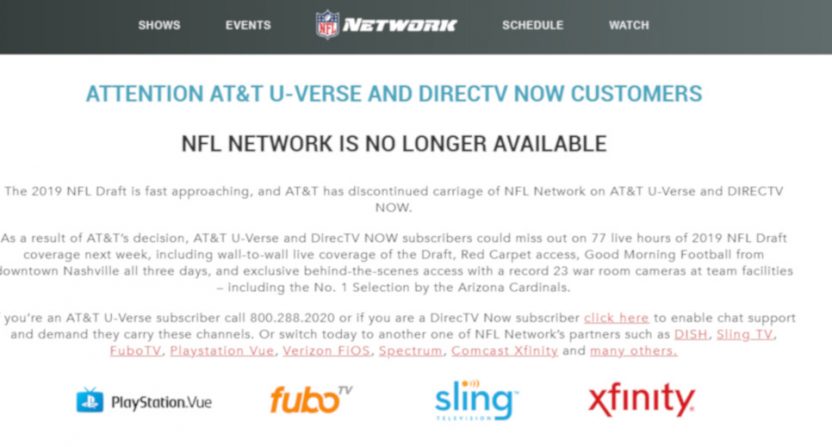 When NFL Network (and NFL RedZone) went dark on AT&T U-verse and (AT&T-owned) DirecTV Now this week, AT&T quickly directed its complaining customers (and there were many of those) to a website relaying their side of events. That website included the lines of “Our rights to provide the NFL Network in your TV lineup have expired. We’re sorry for any inconvenience. …As we continue to manage content costs, we could not reach an agreement with the NFL to continue to carry their channels on U-verse TV and DIRECTV NOW.” Well, the NFL has now responded with their own statements and website, with those statements released Wednesday (the same day as the league’s 2019-20 schedule was officially revealed on NFLN). Here’s a statement from a NFL Network spokesperson they passed along:

“We have a long history of working with our distribution partners to come to fair agreements. That said, in order to come to an agreement there must be a willingness to communicate, to exchange proposals, to sit down and negotiate. Unfortunately, as it pertains to AT&T, we never heard a word from them until NFL Network and NFL RedZone were pulled from the AT&T U-Verse and DTV Now services. We’re disappointed for all our fans who will miss out on upcoming events such as tonight’s schedule release show and next week’s NFL Draft where NFL Network will have exclusive behind-the-scenes access with a record 23 war room cameras at team facilities – including the No. 1 Selection, Arizona Cardinals.”

And here’s more from their release:

As of earlier this week NFL Network and NFL RedZone are no longer available to AT&T U-Verse subscribers or DTV Now subscribers. While the NFL remains committed to negotiating renewed agreements on fair and equitable terms, AT&T has not been willing to actively engage.

That’s pretty strong language. And as mentioned in our previous piece on this, there are possible implications here beyond U-verse and DirecTV Now. NFLN is still available on DirecTV (also owned by AT&T) at the moment, and DirecTV has exclusive access to Sunday Ticket through the 2019-20 season, but the NFL has an opportunity to opt out of that deal after this year. And while NFL commissioner Roger Goodell’s comments about AT&T in March were quite complimentary, they also pointed to the league’s desire to maybe go to a streaming partner as well (“We’re having great discussions with DirecTV and AT&T. We’ve had a 25-year partnership and we want to continue that partnership, but we also are looking to see how we can change the delivery.”) And it’s worth at least pondering if this move from AT&T and the NFL’s apparent dismay at how it was handled could have further impacts on their relationship with DirecTV and Sunday Ticket.

Of course, heated language shows up in plenty of carriage negotiations, and even seemingly-far-apart sides can sometimes come to deals and then pretend they’ve always been friends. And there’s definitely a chance this gets resolved by the start of the NFL season this fall; while NFLN’s schedule release, draft coverage, and other offseason coverage has a decent audience in its own right, there are a lot of people who particularly care about the network when the season starts (including their exclusive games, which start with a Thursday night Buccaneers-Panthers clash in Week 2) and that could put some pressure on AT&T to strike a deal. It’s also notable that AT&T is trying to shift many of its U-verse customers over to DirecTV, so the DirecTV deal is the bigger one, and NFLN is still available there for the time being.

But at the very least, this looks like a chilling of relations between the NFL and AT&T. And the comments from AT&T on “could not reach an agreement” and from the NFL on “we never heard a word from them” make it sound like there are no current negotiations, and no current progress on restoring NFLN to U-verse and DirecTV Now. And that could maybe affect whatever the NFL decides with DirecTV and Sunday Ticket, too. It doesn’t necessarily spell doom, as DirecTV and U-verse have handled some carriage negotiations separately despite their shared ownership, and some channels are available on one service but not the other. But this definitely doesn’t sound like all’s well between the NFL and AT&T right now, and that may wind up affecting if the NFL chooses to keep Sunday Ticket exclusively with DirecTV or make a change there. We’ll see how it all plays out.