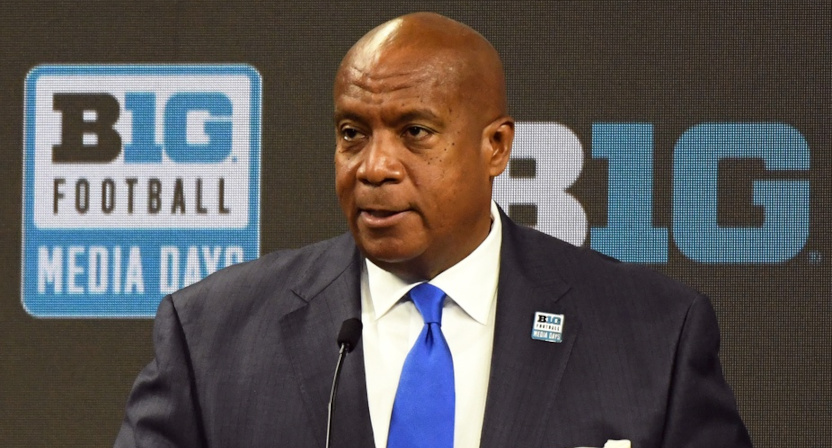 While the Big Ten TV deals for 2023-24 through 2029-30 are done now, the conference’s composition may not be set in stone. The Big Ten has 14 current teams, and it’s set to go to 16 in 2024-25 with the additions of USC and UCLA, and it just signed the richest contract ever (on a dollars per year basis) for a college athletics conference. But Brett McMurphy of The Action Network reported Thursday that the conference (led by commissioner Kevin Warren, seen above at Big Ten Media Days in July) is “not done” expanding, and that these deals contain a specific escalator clause that could raise the total dollars significantly:

Here’s the key part of McMurphy’s piece on that:

The contract includes an escalator clause, meaning the deal could approach nearly $10 billion if the Big Ten’s membership increases, network sources said. Even after adding USC and UCLA, the Big Ten “is not done” expanding, sources told Action Network.

Last month, Action Network reported the Big Ten would expand beyond 16 schools and was targeting Notre Dame, along with Oregon, Washington, Stanford and Cal from the Pac-12. Those plans have not changed, sources said this week.

Regardless of whether Notre Dame joins the Big Ten or remains independent, the league still wants to add more Pac-12 schools to help reduce potential travel concerns for USC and UCLA, sources said.

First, let’s talk those $7-8 billion total dollar values for the newly-signed Big Ten deal. Those line up with other reports, with Michael Smith of Sports Business Journal pegging this deal as worth an average of $1.1 billion annually (which would be $7.7 billion total over seven years) and Alan Blinder and Kevin Draper of The New York Times noting it as “at least $1 billion a year.” Of course, it won’t actually be paid out that way; the deal is back-loaded, with CBS paying more for more games beginning in 2024 after their SEC contract expires, and with the game inventory (and thus, also the prices paid) rising after UCLA and USC join.

Smith’s piece includes a helpful chart of other conferences’ deals. The SEC/ESPN one beginning in 2024 is the next-highest per year, at $710 million per year ($7.1 billion across 10 years). It’s notable that that SEC deal was announced in December 2020, before the summer 2021 additions of Oklahoma and Texas, moves projected to happen in 2025 if not sooner. The figures will likely look different when they’re fully considered, which we’ll discuss when we get to this Big Ten escalator clause later.

That’s not precisely how the actual distribution figures will look, of course. Some media rights revenue goes to conference operations, and the schools get some further distributions not considered here from the NCAA Tournament, bowl games, and the College Football Playoff. And the per-school distribution each year also reflects the amount of money actually paid to the conference that year, not the average value over the contract length, so backloading matters. McMurphy writes that the schools will get a per-school distribution (considering all those factors) of near $60 million in 2023-24, a slight increase in 2024-25, and an increase to around $100 million per school beginning in 2025-26.

That’s significantly higher than research firm Navigate estimated in March this year, which was at $75.2 million for the Big Ten in 2025 and $94.5 million in 2029 (those estimates were ahead of the UCLA and USC news, though, which significantly boosted the Big Ten). And they definitely would represent the Big Ten pulling further away from the rest of the Power 5, with only the SEC anywhere close to it. (It should be noted too that the Big Ten retains a minority stake in its conference network, so there’s potentially extra revenue there; by contrast, the SEC Network is fully owned by ESPN.)

A key thing to consider with further expansion is what it would mean for those per-school distributions. Let’s assume the escalator clause here is set at $10 billion, or $1.43 billion per year (McMurphy writes “nearly 10 billion,” so it’s probably somewhat below that). We don’t know how many teams or which teams would be required to reach that specific value. But, from a mathematical standpoint, consider the $68.75 million per school calculated earlier (not the actual per-school distribution, but the share of the $1.1 billion schools would get if it was all paid out). If the $1.1 billion rises to $1.43 billion, but gets divided by more schools, $68.75 million could be maintained with 18 schools ($79 million), 20 schools ($71.4 billion), and almost with 21 (which would represent those other four Pac-12 schools McMurphy lists, plus Notre Dame, and gives $68.0 million). However, going any larger would drop the per-school numbers significantly.

Thus, expansion by four or five more teams might be doable for the conference given those numbers. But it carries some key questions, specifically on what those escalator clauses require. And in particular, if they require getting Notre Dame for the deals to go up that high, that may be tough considering the Irish’s stated desire to maintain their independence. So it should be noted that this is all just reporting on what could happen, not reporting that those schools will join the Big Ten.

But McMurphy’s addition of the $10 billion dollar value here is notable. It’s certainly interesting that there’s some combination of discussed expansion that would get these networks to fork out an approximate $2.3 billion more in total (almost 30 percent of what they’ve agreed to pay so far). And while expansion by four or five schools would make those numbers continue to look good for the existing schools, it’s not clear if that represents good value for the networks, especially if this doesn’t wind up including Notre Dame. So it’s possible that this escalator clause only goes that high with much bigger or more significant expansion. At any rate, it will be something well worth keeping an eye on.

The other part of this that’s interesting is the very specific reporting on an escalator clause, a $10 billion value, and a “is not done” quote (albeit anonymously). It’s well-established that conference rights deal packages change value depending on who’s in the conference. Even a basic contract here likely would have some provisions for renegotiation if the conference gains or loses members. But a specific escalator clause with a specific dollar value feels more significant; it’s networks making actual contractual promises to pay a specified amount more based on a condition (and we don’t know exactly what the condition is), not just renegotiate.

And while relaying valuations for different potential additions is not necessarily 100 percent bad (there’s an argument it’s better than having conference realignment driven by guessing at schools’ values, which some people even do using “studies” that started with Google searches for “college football”), it certainly feeds into the conversations around networks driving realignment. Interestingly, though, ESPN is the one most commonly targeted by that accusation, and they have absolutely nothing to do with any further potential Big Ten expansion now they’re leaving the conference behind. So maybe this will spark some further conversation about Fox (which made the unusual move of having its executives sit in on discussions between the Big Ten and other networks, and which has a key conference stake thanks to their majority control of BTN) and others’ roles in realignment. At any rate, it’s certainly interesting to have this escalator/expansion report out there, and it will be interesting to see what it leads to.

1 thought on “Big Ten reportedly “not done” expanding after $1.1 billion/year rights deals, which include escalator clause”