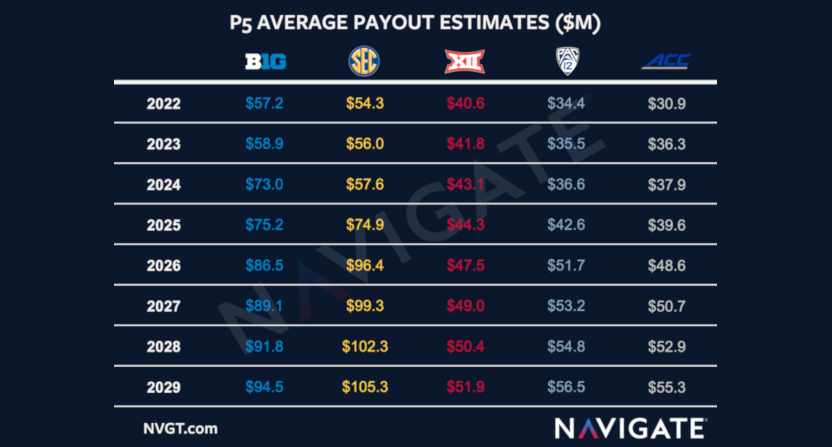 Over the last decade in college athletics, it’s been clear that the Big Ten and the SEC are on an economic “Power Two” level well ahead of their Power Five colleagues at the ACC, the Big 12, and the Pac-12. However, those at the Pac-12 and Big 12 have tried to dispute that; while the ACC has its rights locked up (with ESPN) through 2036, Pac-12 rights are up beginning with the 2024-25 season and the Big 12 rights are up beginning in 2025-26. , and both of those conferences have tried to argue that the next round of deals will see them closer to the SEC (which has deals running through 2033-34 with ESPN) and Big Ten (which has its deal up beginning with the 2024-25 season). A third-party prediction from research firm Navigate (chart seen at top) suggests the gap is only going to widen in terms of overall dollars, though. Here’s more from their writeup of that:

Our team estimated the rise in average Power 5 conference payouts over the next 8 years. You can see from the chart above that each conference’s average payout is expected to increase significantly during that time. We project that the SEC will overtake the Big 10 for the top spot, paying out over $100M to member universities by the end of this decade. A few considerations to keep in mind when analyzing these results:

The top-line discussion of if the SEC or the Big Ten will eventually come out on top is difficult to predict at this moment. There’s substantial uncertainty for both. For the SEC, the big question is how the additions of Oklahoma and Texas (slated for 2025-26 at the latest, but many have predicted those moves may come sooner) will impact their already-agreed-on TV deals. If there’s enough extra revenue there to not only keep per-school payouts even, but boost them significantly, that will look closer to these projections. But that’s not certain right now.

Meanwhile, there’s also a lot of uncertainty around how much the Big Ten will get. All four major conventional broadcast networks reportedly have at least some interest, and some tech firms may as well. And major Big Ten games have traditionally done very well from a viewership perspective. But it’s unclear if that will lead to enough extra money to elevate them over a SEC that includes Texas and Oklahoma; Navigate projects it will, but that’s certainly not a universal expectation. And that’s led to a lot of back-and-forth debate about how those Power Two conferences will eventually stack up.

The less-disputable part of this is how the Big Ten and SEC still look poised to pull far ahead of the Pac-12, Big 12, and ACC, though. The Pac-12 in particular has made a lot of noise about how a new rights deal might see them in a more equitable position, but it’s worth noting that their recent football struggles don’t help, and they’ll seemingly always have some factors of geography and engaged alumni bases putting them at a disadvantage against that Power Two. We’ll see the actual impact when their new deal comes ahead of the 2024-25 season. Meanwhile, the Big 12 has managed to survive Texas and Oklahoma leaving (for now) thanks to four additions last fall, but their new rights deal (coming for the 2025-26 season and beyond) has a lot of uncertainty around it.

Navigate’s projections here on per-school payouts may not wind up being entirely accurate. As noted in that quoted text above, these figures are based on a lot of assumptions. And that’s particularly worth considering with so many contracts coming up in the next few years. But it’s definitely interesting to see some dollar figures attached to how far the Big Ten and SEC may be ahead of their “Power Five” brethren in a few years. And if something close to this does come true, that will definitely add to the case for a top-tier “Power Two” ahead of the other Power Five conferences.