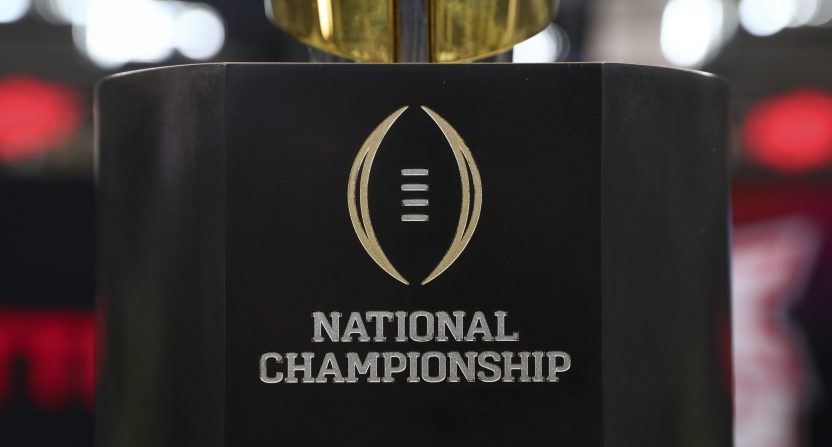 To say that the last couple of months has seen a seismic shift in college football might be an understatement. Soon after it was announced that the sport’s power brokers were going to recommend a 12-team playoff, we saw the return of conference realignment. Big 12 powerhouses Texas and Oklahoma made it clear they wanted out of that conference and into the mighty SEC, which was more than happy to “consider” accepting them as members. That move has sent shockwaves through the rest of the sport as every other school scrambles to figure out where they fit in now (and if that means a move of their own).

And right smack dab in the middle of all this confusion and commotion has been ESPN. So intertwined is the sports network with the 12-team playoff (for which it owns all the TV rights through 2025) and the success of the SEC, that Big 12 commissioner Bob Bowlsby had no problem publicly accusing them of tampering (a claim ESPN has said is “without merit”).

Regardless of the legal details, the timing of everything, and the way the SEC has now stacked the deck so much in their favor, in a way that greatly benefits ESPN, has a lot of college football bigwigs wondering if we all need to press pause on everything and take a step back.

Yahoo! Sports Pete Thamel spoke with Ohio State AD Gene Smith about the developments and he’s a big proponent of slowing things down to figure out what the best foot forward is for all of college football, not just for ESPN and the SEC.

Thamel noted that there are other leaders in the sport who share the same sentiment, especially when it comes to ESPN and “the financial value of allowing ESPN to continue to be the sole owner of the most powerful rights in college football.” As another P5 athletic director told Thamel, it’s harder for them to improve their regular-season TV rights numbers when the crown jewel of each season is already taken.

“It behooves everyone not named the SEC and ACC [for the CFP rights to go to market]…It’s in all of our best interest [of other leagues] to let the contract through and go to open market. Why would a streaming service want to bid on a league like the Big Ten or Pac-12 to carry the regular season if they are going to just hand it over to ESPN for the playoffs?”

CBS Sports’ Dennis Dodd spoke with “several high-profile administrators” as well, including new Pac-12 commissioner George Kliavkoff, who wants to see how the dust will settle with conferences and realignment before the sport moves forward on plans to expand the playoffs, which has been floated to start by 2023.

“It’s certainly going to be addressed. Remember that was a two-year process done by four people. The proposal is good, but it’s not done. We’ve mis-set fans’ expectations that it’s going to move on a very fast timeline.”

And as another P5 AD told Dodd, “Why on God’s green Earth would the Pac-12 and Big Ten hand over these [playoff] rights, which only strengthens the SEC?”

In other words, the SEC (and perhaps ESPN) may have been making some power moves and stockpiling power, but that doesn’t mean the rest of the sport has no choice but to go along with them. While they might dominate on the field and in the ratings, while the other conferences still exist and have the ability to strategize together, there’s still work to be done on the future of college football and where the money goes.