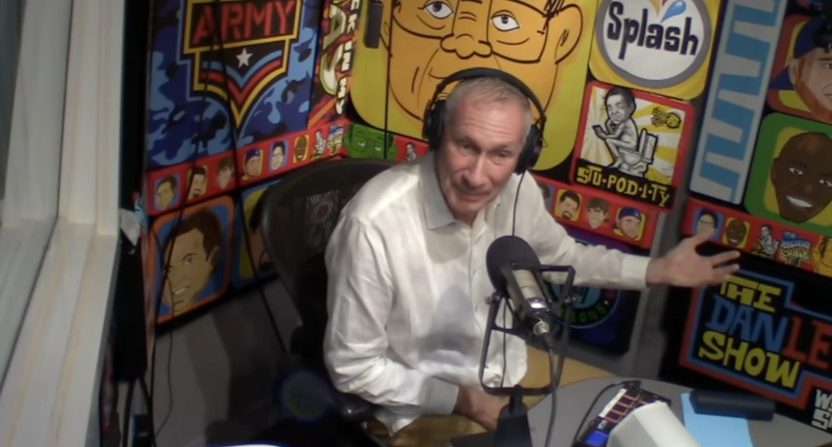 The idea of Texas and Oklahoma going to the SEC looks very good for ESPN, which will have 100 percent of those schools’ TV rights (from 2024-25 on) instead of the around 50 percent they currently have with the Big 12. That’s led to plenty of analysis on the role ESPN may have played in making that move happen, and to comments like “ESPN has been right in the middle of it” from an unnamed Big 12 athletic director, and to a cease-and-desist letter from Big 12 commissioner Bob Bowlsby to ESPN’s Burke Magnus accusing the network of inducing Big 12 members to leave for other conferences. And the latest discussion of this comes from former ESPN president John Skipper (now a Meadowlark Media executive) on that company’s Le Batard and Friends show Wednesday:

That full 21-minute clip is pretty interesting all around, but it has a few especially notable moments. Some of those were transcribed by Dan Lyons at The Spun. Here’s the key one:

“Is this all the instigation of ESPN? Is this all your fault?” Le Batard asked Skipper. “I’d like to take the fifth,” [Skipper] joked. “Do I have rights?”

…”I doubt all of that is unrelated.” [Skipper said]. “I would not assume that this is just happening, that one day the Texas and Oklahoma guys woke up, I would guess that it’s a logical sequence of events that ESPN now has all of the SEC, now they bring Texas and Oklahoma in. Think of all the good games you get.”

This is not new analysis, as plenty of outside observers have already connected the dots on that “logical sequence of events” from ESPN acquiring full SEC rights (beginning in 2024-25) last December to Texas and Oklahoma suddenly being interested in joining the SEC. But this comes with extra force because of who’s saying it. Yes, Skipper would not have been involved in these particular negotiations; he resigned from ESPN in December 2017. But he knows how things work in terms of how that network acquires rights, and he knows the people involved on both the ESPN side and the conference side. And his comments about what happened with the past Big 12 deal and the thwarting of the Pac-16 idea illustrate that ESPN at least under his leadership did make rights moves based on overall leverage against Fox. Here’s Lyons’ transcription of that part:

“Texas had decided to do a network, we didn’t give them the idea. But we knew if we did the network, we could entice them to stay in the Big 12. Keep them together, that was important to us. We already had a Pac-12 deal, but FOX was ascendent in the Pac-12. We didn’t want to see Texas go to the Pac-12.”

Again, what Skipper says here is what many people have said before, but it’s particularly interesting to have that on the record given his former position. And it’s notable that while ESPN’s maneuvering in these kinds of deals has been widely discussed by outsiders, they’ve always pushed back hard against claims about it. Hell, even our piece on ESPN benefiting from Texas and OU joining the SEC drew PR pushback. And they also pushed back on Bowlsby’s letter, saying “The claims in the letter have no merit.” 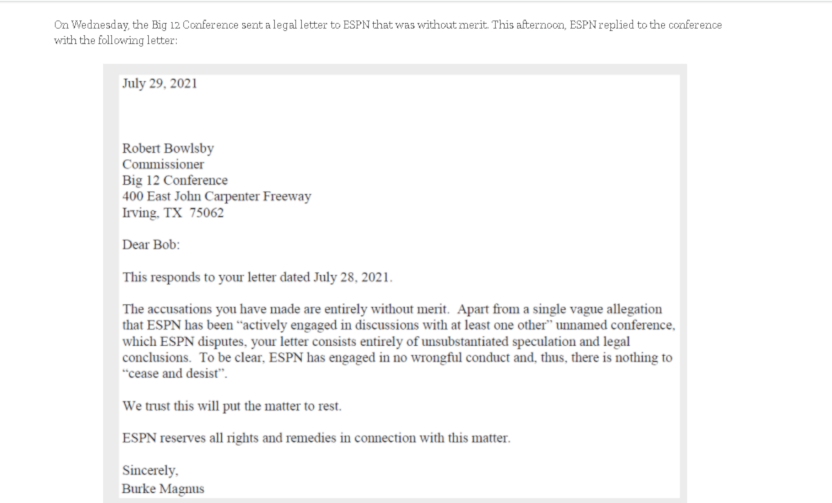 ESPN attempts to quiet those who talk about their role in conference realignment are anything but new. One example comes from the 2011 ACC/Big East realignment, where then-Boston College athletic director Gene DeFilippo told The Boston Globe “ESPN is the one who told us what to do.” ESPN went on a full-out PR offensive against that quote, prompting an apology from DeFillipo and pushing out a piece on their PR site with athletic directors from other schools denying it. But it’s harder for them to do that with someone like Skipper.

With named athletic directors, ESPN can flex some muscle to prompt an apology like DeFillipo eventually gave, as those ADs still have to do business with them going forward. With outside analysts who put the pieces together, ESPN can claim “Well, they don’t actually work here, they don’t know how we do business.” But neither of those pushbacks apply to Skipper, who absolutely knows how ESPN’s past rights deals have been done, and who doesn’t have any future obligation to do ESPN’s bidding. And that’s what makes Skipper’s comments here so notable. He’s not saying anything new, but he’s confirming how some past deals have been done, and suggesting that current deals are following similar patterns. And his comments have more force than those from outside analysts, even if they’re saying the same thing, and it’s extremely hard for ESPN to refute him.

It’s worth noting that none of this necessarily carries any legal consequences for ESPN. Even the Big 12’s letter was just a cease-and-desist, not an actual lawsuit. And even if a lawsuit is filed, that’s not necessarily a winning proposition for the conference. For one, proving tortious interference is hard, and even if Bowlsby has the “irrefutable” evidence he claims he does, that doesn’t necessarily lead to a notable court win. The conference also may not exist by the time anything happens in court.

And it’s worth mentioning that there are interpretations of these circumstances that don’t involve tortious interference. The defense is absolutely not “First Amendment rights” (which are about government and the press), despite what some law professors might claim, as this isn’t about ESPN’s news side or its reporting or governmental interference. A more reasonable defense might be that hypothetical discussions between ESPN business-side executives and conference/school officials about what rights deals might look like in a different conference setup aren’t violating existing contracts, perhaps especially if the schools or conferences reached out first, but maybe even if they didn’t.

Rights contracts would have to be written very explicitly to prohibit those kinds of hypothetical talks, and it’s unclear if these ones are, or if they even could be. And it’s notable that the basic numbers here on what would be needed to make a move make any sense for both sides can be calculated from previously-reported information. So ESPN’s actual involvement could be as simple as saying “Yes” or “No” to a SEC question of “Will you pay us this much more if we add these schools?”

It also should be mentioned that while ESPN takes the most flak in these kinds of conversations, that isn’t entirely fair. The world of sports broadcasting rights involves all sorts of discussions, influences, and deals. One example comes from Sports Business Journal‘s detailed 2011 reporting on how adversaries ESPN and Fox teamed up to stop NBC from getting Pac-10 (now Pac-12) rights. Another example comes from FIFA’s no-bid move to extend Fox’s World Cup rights to avoid a lawsuit over a winter 2022 World Cup, which ticked off both ESPN and Univision. Fox has been involved in many other business-side moves over the years, too, and their on-air programming has often been much more blatant about emphasizing their rights than ESPN’s has been. So absolutely none of this is “ESPN is the only network that does this.”

But there are some good reasons why ESPN gets talked about more here than other networks. The rights deal environment is different in college sports than it is anywhere else; leagues like the NFL, NBA and NHL don’t change their membership (aside from expansion) around rights deals, but college  conferences do. Those deals are with entities (conferences) that exist in a particular configuration at the moment of the deal, and that often change membership over time.

And ESPN dominates the college sports landscape on tonnage (although, interestingly enough, not at the high end of viewership; that’s part of what this Texas/OU move to the SEC will change), and they’re the most important media outlet to discuss in college realignment. And they also have more of a news side than any other sports broadcasting outlet, and that perhaps gives them more reason to try and pretend that they’re impartial and fair than the likes of Fox. (Also, it should be mentioned that none of this is really actually about the news side of ESPN, or even the broader on-air side that includes not-news studio shows; this is about the business side that does the rights deals.)  So that means that there’s more discussion of ESPN interference than there is with other networks.

All in all, as mentioned above, Skipper’s comments here aren’t anything that hadn’t previously been said. But these comments are notable and newsworthy because of who is saying them. And they add to the significant collection of evidence that suggests many of the people who have discussed ESPN’s various roles in conference realignment over the years were on the right track. None of that necessarily means anything in court or helps the Big 12’s push against ESPN interference, and none of it necessarily changes the outcome of any of these realignment talks. But it’s notable that Skipper’s saying outright what many people had previously presumed. And his comments are a further indication that people should absolutely keep an eye on ESPN in any and all conference realignment talks.