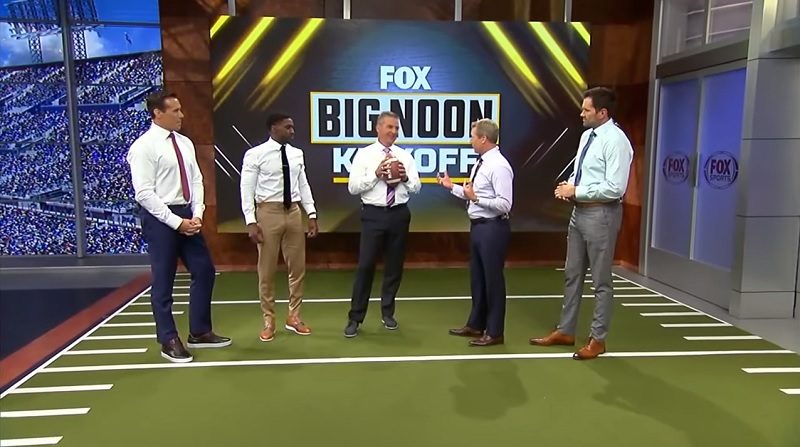 Fox debuted its much ballyhooed college football pregame show, Big Noon Kickoff, this past Saturday. Contrary to the initial rumblings when news about the show began to leak out, it’s not going to challenge ESPN’s College GameDay’s supremacy in the pregame department. However, as the season approached and Fox started sharing plans about dominating viewership in the noon window, the purpose of Big Noon Kickoff became more clear: it was going to be a way to help Fox push viewership to their network for the early time slot.

And that’s where Big Noon Kickoff succeeds, especially when compared to the broader, less focused GameDay. One thing became apparent to me when watching Big Noon Kickoff: this is the Urban Meyer show. It seemed like he got more speaking time than any of the other panelists (Reggie Bush, Matt Leinart, and Brady Quinn) in the panel discussions, and perhaps even more than host Rob Stone. Meyer also was the star of not one, but two segments, one of which was a demonstration on RPOs and one of which was a softball-laden interview with Ryan Day, his successor at Ohio State.

It's all about the Run-Pass Option in college football these days.

@OSUCoachMeyer breaks the system down in detail. Trust us, you'll want to watch this. ⬇️ pic.twitter.com/U7LjYog4Wz

As for the rest of the cast, everything was about as expected. Leinart and Bush talked about their USC days. Quinn picked Notre Dame to make the College Football Playoff. Meyer mentioned Leinart (sitting next to him) as one of the best college football quarterbacks of all-time before deciding on Tim Tebow, his former player, as the best ever (much to the pleasure of SEC Network personnel). Stone was the consummate host and traffic cop on set, a role he can perform in his sleep at this point.But so much of the focus of Big Noon Kickoff is on…well, the noon kickoff game. A handful of other games were briefly mentioned during panel discussions, with minimal conversation about them. None of the games from Thursday or Friday were recapped. A number of ranked teams, including Michigan, Penn State, and Iowa (from my recollection, at least) weren’t mentioned at all, despite all three of those teams playing on BTN or FS1.

You’d think, if anything, Fox would also want to promote the hell out of those games instead of throwing all of their weight behind the noon game on Fox.A college football fan tuning in for a general preview show likely came away disappointed from Big Noon Kickoff, because what they instead got over the ~40 minutes (plus commercial breaks) of the pregame show was a whole lot of Ohio State content and cursory discussions about other parts of Saturday’s slate. However, that was the goal of Big Noon Kickoff: promote the noon timeslot.

And to that end, Week 1 was a success of Fox. FAU-Ohio State was the highest-rated noon game in the window, drawing a 2.1 overnight against a mediocre slate of other games (highlighted by a real cracker between Boise State-Florida State, which would have been better competition had it not been shifted to ESPNEWS from a primetime slot on ESPN thanks to Hurricane Dorian). Overall, GameDay reportedly drew an overnight twice as high as Big Noon Kickoff, but beating GameDay head to head was never going to be a realistic goal, despite those initial rumblings.

For their part, ESPN was (unsurprisingly) quick to note that despite Fox dominating “the window,” they dominated Week 1 of the season (as you’d expect), with 12 of the 14 highest rated games on ESPN networks (they also combined viewership across all their networks for the noon window and noted those networks cumulatively drew a 3.4, but we’re not going to play that game this season).

In Week 2, Fox will have a much higher bar to clear in the noon window: their featured game is Army-Michigan, while Cincinnati-Ohio State is on ABC. Both the Buckeyes and Wolverines are strong national draws, but when the two teams are going head to head in the same window on different networks, Fox’s noon dominance is less of a guarantee than in Week 1.