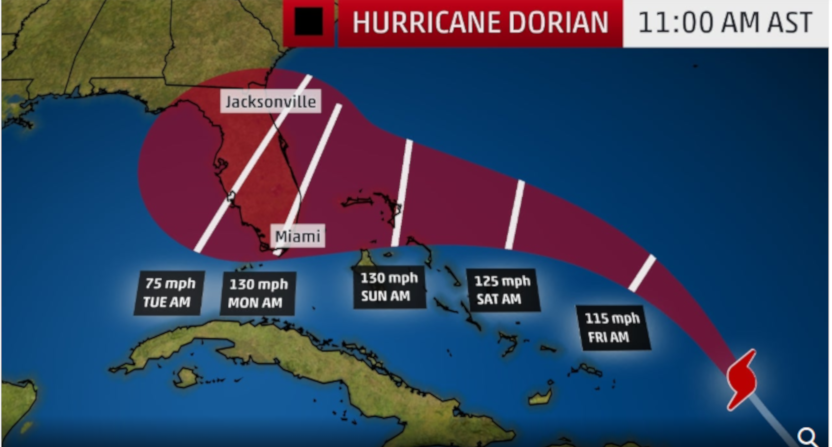 Hurricane Dorian is projected to intensify into a category-4 hurricane and potentially hit Florida this weekend, and that’s led to significant changes on a lot of fronts, including college football. The biggest change so far in the college football world is the Boise State Broncos-Florida State Seminoles game Saturday, which was initially set for 7 p.m. Eastern Saturday at TIAA Bank Field (the Jaguars’ stadium) in Jacksonville on Florida’s east coast; it’s now been moved west to Florida State’s home stadium, Doak Campbell Stadium in Tallahassee, and the kickoff’s been moved to noon Eastern.

That also means some network changes. This game was originally set for ESPN, but will now be played on ESPNEWS (ESPN is airing South Alabama at Nebraska in that noon Eastern slot). Interestingly, that means there’s now more competition for Fox’s first “Big Noon Kickoff” (the game itself, not the pre-game show of that name); they’re airing Florida Atlantic-Ohio State there. Meanwhile, at 7:30 p.m. Eastern, No. 3 Georgia at Vanderbilt will move from SEC Network to ESPN, and Georgia Southern at No. 6 LSU will now move from ESPNU to SEC Network.

But the announcing lineups will remain as they were, so we’ll have crews in some unusual slots. This means the team of Dave Pasch, Greg McElroy and Tom Luginbill will be on ESPNEWS at noon rather than ESPN at 7, while the SEC Network team of Tom Hart, Jordan Rodgers and Cole Cubelic will be calling the ESPN game at 7:30. Mike Couzens, Kirk Morrison and Ed Aschoff will now be handling the SEC Network game at 7:30.

Changes thanks to forecast hurricanes happen pretty regularly in college football, with last September’s Hurricane Florence causing even more changes and some outright cancellations. But there are still some big hurdles that pop up as a result, especially with a venue switch. As per Wayne McGahee III and Curt Weiler of the Tallahassee Democrat, all tickets sold for the game in Jacksonville will be refunded and tickets for the new game will be available for $10 in advance or $15 at the door (or free to Florida State and Boise State students). But there still likely will be some expensive travel changes for those hoping to go to this game. (Update: Michael Katz of The Idaho Statesman spoke to some Boise State fans impacted by this about how it affected their plans.)

Still, as Jacksonville mayor Lenny Curry said at a news conference, having a ton of extra people in town (28,000 from outside Jacksonville’s First Coast region were expected) for a football game around the time of an expected hurricane was something worth avoiding. As Curry spelled out, the chief concern isn’t the game itself (the hurricane is expected to make Florida landfall late Sunday or early Monday), but rather having those extra people in town, especially as that relates to evacuation capabilities.

“This isn’t about a weather event happening during a potential game,” Jacksonville Mayor Lenny Curry said on Thursday during a news conference. “This is about the ability to move people. This is about having thousands of people here from out of town when we may either be issuing evacuation orders or we may have counties south of us that have issued evacuation orders and are coming up through our interstates.”

“It would put too many people’s lives at risk.”

“It was a tough decision but the right decision.”

It’s hard to argue with that. While the inconvenience to many from this change is certainly significant, that seems to make more sense than just playing the game as planned despite the hurricane forecasts.

[The Tallahassee Democrat; graphic from The Weather Channel]