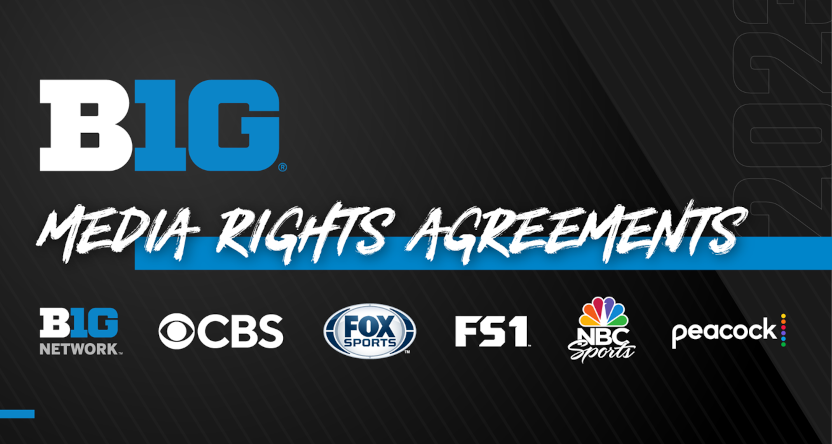 It’s been known for a while that the Big Ten’s primary rights deals would be with Fox, CBS, and NBC, especially after ESPN was confirmed to be out of the picture. The conference and those broadcasters officially announced their deals Thursday morning, and there are some notable elements to them.

The conference release outlines a lot of the overall elements. These deals are all for seven years (2023-24 through 2029-30), as expected. Fox will continue with the primary Big Ten football package, but expand that even more versus the approximate 50/50 tonnage split they had with ESPN, and they have the opportunity for some late-night games involving USC and UCLA after those schools join the conference in 2024. Fox is also adding a lot of basketball, planning to feature 200-plus men’s basketball games across their networks each season. They have the option to pick up other sports as well. And BTN, which is majority-owned by Fox in a partnership with the conference, will continue to have “a full slate of football, basketball and Olympic sport competition throughout the entire year.”

As for CBS, they’re getting a football game each week most of the time. Their package will start with seven games various windows in 2023 while they still have a SEC game in the 3:30 p.m. Eastern slot. After that, they’ll televise up to 15 football games a year, including a Black Friday afternoon game. Most CBS football games after 2023 will be in the 3:30 p.m. ET slot. CBS is also expanding their existing basketball package: in addition to having even more regular-season games, they’ll continue to show the men’s basketball tournament semifinals and final, and they’ll newly show the women’s basketball tournament final. All CBS football and basketball broadcasts will also be available for streaming on Paramount+. So if you want to bet on them while watching, you can instantly do so on sites such as 메이저사이트.

The conference championship game will also move around during these deals, with Fox showing four of those, CBS and Paramount+ showing two (in 2024 and 2028), and NBC showing one (in 2026). Here’s more from the releases, starting with Fox:

Highlights from the FOX Sports package include:

CBS Sports and the Big Ten Conference today announced a new long-term multiplatform rights agreement for football and basketball, with every CBS game in the package airing on the CBS Television Network and also streaming live on Paramount+. The seven-year deal begins in 2023 and runs through the 2029-30 season.

CBS will present a marquee Big Ten football game every week in its traditional 3:30 PM, ET time slot on Saturday, beginning with the 2024 season. CBS Sports’ Big Ten football coverage kicks off in 2023 with select games in various windows. CBS has been the highest-rated college football Network since 2009.

The Big Ten Football Championship Game will air on CBS and stream live on Paramount+ in 2024 and 2028.

The new agreement extends CBS Sports’ 32-year partnership with the Big Ten for regular-season basketball, with an increased number of games on the schedule beginning with the 2024 season and continuing through the remainder of the deal. CBS Sports will present both the Men’s and Women’s Championship games each season, along with the Men’s semi-final games. The Big Ten on CBS is the highest-rated men’s regular-season college basketball package on television.

And here’s more from NBC:

NBCUniversal and the Big Ten Conference today announced a landmark 7-year agreement for NBC and Peacock to become the exclusive home of Big Ten Saturday Night football, beginning in 2023. Peacock will also serve as the exclusive home for eight additional Big Ten Football games each season.

Big Ten Saturday Night will mark the first time ever that Big Ten Football will have a dedicated weekly primetime game on a national broadcast network. NBC Sports will present the 2026 Big Ten Football Championship Game on NBC and Peacock.

We’ll see how these deals work out for the networks and the conference when they kick in in 2023.