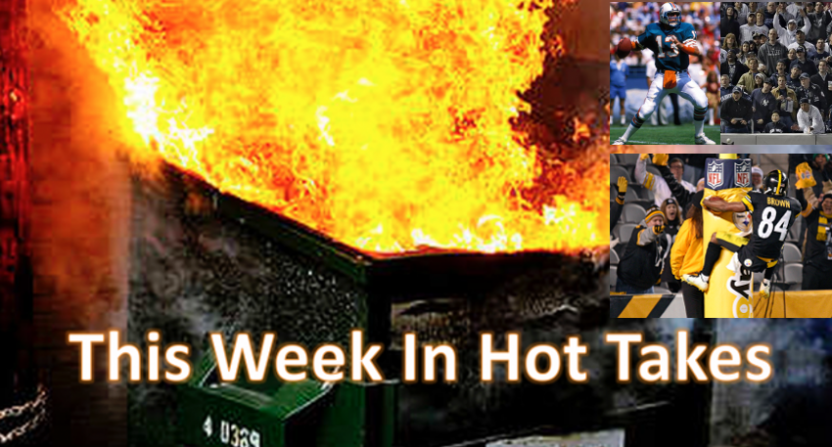 Welcome to another edition of This Week In Hot Takes. This time around, we’re looking at the hottest sports media takes from Sept. 28-Oct. 4.

5. Grant Paulsen has a whole lot of takes defending Tom Wilson: Washington Capitals’ forward Tom Wilson was in the news this week for a 20-game suspension (he’s appealing) after an illegal check to the head of St. Louis Blues’ forward Oskar Sundqvist Sunday. Part of the stated rationale for the length of Wilson’s suspension was “an unprecedented frequency of suspensions in the history of the Department of Player Safety,” as this was his fourth suspension in his past 105 games (including regular-season and playoff games).

Whether that qualifies someone as “dirty” or not is obviously subjective, but there’s plenty of proof that the league has often found Wilson has violated its rules in a way deserving of a suspension. D.C. radio host (on 106.7 The Fan) and NBC Sports Washington Capitals’ pre-game and post-game host Grant Paulsen has been going all in in defense of Wilson this week, though, starting with some takes on the suspension:

This is a complete joke. A quarter of a season for that hit? Just preposterous. https://t.co/V5U8jlADVg

Suspending a player with a violent track record is one thing. Forcing him to miss almost 25% of his season? Get out of here.

The only hits that should result in 20 game suspensions are dirty, late, violent hits that aren't levied during play. Intent to injure, away from the play garbage. Not violent hockey collisions on puck-carriers with their head down.

Tom Wilson did not leave his feet. He didn't throw an elbow to the head. He crushed a guy skating in the middle of the ice with his head down, with the bulk of the contact to the shoulder. I was ready for 6 games. Maybe 8. But 20? Unbelievable.

Okay, sure, there can be a debate on if Wilson deserves a stronger suspension given his history (as the league believes) or if this is too harsh for the particular play involved. But “complete joke” might be a bit far. And where this really got interesting was Wednesday in the Capitals’ season-opener against the Boston Bruins, which saw them win 7-0, but saw Bruins’ forward Brad Marchand go after Caps’ forward Lars Eller late in the game in anger over Eller’s celebration of Washington’s seventh goal, pummeling him and leaving him bleeding. Marchand received 17 minutes in penalties for that, and his actions were controversial, with some saying it was fine as Eller also dropped his gloves, but many others objecting to Marchand going after a player like Eller who had never previously fought. And Paulsen took it to a whole new level by not only claiming Marchand (who’s also faced plenty of notable suspensions and fines) is dirtier than Wilson, but that there’s no debate there:

Brad Marchand is an all-time clown-shoe. For the people in my mentions who think Tom WIlson is dirty. No. He is big, physical and violent. Marchand is a slew-footing, face-licking, jack-ass of the highest order.

Brad Marchand fighting Lars Eller, who doesn't fight and was not trying to fight, is what happens when Tom Wilson is not around. Marchand never would have done that if 43 was in lineup. And Wilson would never have done that to a guy who does not fight. That's the difference.

It is comical that people get way more angry about massive hits on players WITH THE PUCK, within the flow of play, than they do clown-shoe instigators delivering blows to the head of unwilling participants in a fight only one person is participating in.

If you think hard-hitting Tom Wilson is a dirtier player than slew-footing Brad Marchand your opinion means nothing to me. I will treat you like I treat people who think the Earth is flat. You do not get a seat at the table. Adults are talking.

Most of that can be used as an argument, sure, and maybe Marchand is “dirtier” than Wilson, whatever that actually means. People can make that case on both sides. But it’s the lengths that Paulsen goes to that elevates this into a hot take, especially with the “You do not get a seat at the table. Adults are talking.” conclusion.

4. Mad Dog goes off on Liam Hendriks, says “he peed his pants”: Chris “Mad Dog” Russo is known for some fiery takes, and he got real up in arms over both the Oakland A’s decision to have a bullpen game in the AL Wild Card Game (led by Liam Hendriks taking the mound) and over Hendriks’ particular suboptimal performance:

Urination, mispronounced name and not taking one breath for 3 straight minutes: The great @MadDogUnleashed recaps A’s-Yankees as only he can win this virtuoso performance. pic.twitter.com/9fBVqaOaLH

“The A’s always got to do things the hard way to show how smart they are. …They were going to start Liam Hendriks out there, who, again, I hate to use the word, he peed in his pants! There’s nothing else to say! He peed in his pants!”

There is, of course, room for rational criticism of the A’s decision or of Hendriks’ performance. This is not that.

3. Danny Kanell argues that Dan Marino would throw for 60 touchdowns and 6,000 yards a year today: Hyperbolic arguments about how great past athletes in today’s leagues are always a bit silly, as there are a whole ton of factors that could alter that (from deeper pools of players to strategy changes to strength and conditioning changes) and none of it’s provable; we don’t have time travel, and even if we did, would we really want to waste it on bringing star athletes forward in time, knowing the chaos that would cause for the rest of the timeline? Anyway, the latest to argue along those lines is CBS’ Danny Kanell:

If @DanMarino played in today's NFL with these rules benefitting offenses like never before he would have thrown for 60 TD's and 6,000 yards a year. #facts

Marino only once threw for over 5,000 yards in a season (in 1984, which set a record that stood until Drew Brees broke it with 5,476 in 2011), and his best passing touchdown total (48) also came that year. He had four other seasons with over 4,000 passing yards, and one (1986) with 44 passing touchdowns; his third-best passing touchdown total was 30 in 1985. So for Kanell’s #facts to be true, Marino’s new career average would have to be about 20 percent better than the best numbers he ever posted, numbers he wasn’t particularly close to the rest of the time.

Yes, if a young Marino was magically brought forward in time, he would probably be able to boost his passing numbers a bit given the passing focus today (there have been nine 5,000-yard passing seasons all-time in the NFL, and all but Marino’s 1984 have come in the last 11 years), but Kanell’s comments are a crazy level of hyperbole. The NFL records are 5,477 yards and 55 touchdowns (Peyton Manning in 2013), and while it’s maybe, maybe possible (if you think Marino’s better than Manning, Brady, Brees, etc) to argue that a young Marino in 2018 could break one or the other of those records (or maybe even both), it’s a stretch to suggest he could get to 6,000 or 60 touchdowns once given that no one has come particularly close. Much less put those numbers up every single year. Sorry, Danny, those aren’t #facts.

2. 98.5 The Sports Hub’s Mike Felger, “Big” Jim Murray and Tony Massarotti go off on “goombah” Yankee fans: It wouldn’t be a Yankees-Red Sox matchup without some takes, and boy, the guys from the 98.5 The Sports Hub afternoon show delivered those Thursday, blasting the Yankees’ fanbase with terms like “goombah” (slang often seen as derogatory towards Italian-Americans).

Boston radio hack Michael Felger and his sidekick @BigJimMurray, who enjoys wearing sunglasses indoors, make fun of the "Goombah animals" who root for the #Yankees. pic.twitter.com/NeppFGbhpd

Murray: “Man, that house full of goombahs, they get loud, and they are into it, every single pitch.”

Felger: “It is a house full of goombahs! The whole thing, there’s very few minorities, very few women, very few kids. It’s one dude with a chain and a Yankee jersey hanging off the next!”

Murray: “Yeah, the gold chain with the Italian horn.”

…Felger: “Where’d all those dudes come from? With that dudefest?”

Murray: “The primordial ooze. They crawled out of it.”

Felger: “Seriously. It’s like they emptied the swamp. And the same dude poured out. White, unshaven, I know I shouldn’t talk, but it was all the same guy. 50,000 of them, hanging off each other. Like animals!”

Of course some trash talk of opposing fanbases is to be expected, but, uh, this seems to be going a little far. Maybe to be expected from the guys who thought it was funny to make plane crash noises when discussing Roy Halladay’s death, though.

1. Phil Mushnick says celebrations, ads and sports TV are responsible for the harassment of youth sports officials: What’s really delightful about New York Post curmudgeon Phil Mushnick is when he has at least part of a point, then veers completely away from it in favor of the things he regularly bashes. In this case, Mushnick has a column titled “Deranged adults scaring off refs and ruining youth sports,” and the first part of it actually makes sense; he discusses how there have been more and more cases of assault on or threats against youth officials in the last few decades, and how there also have been some notable declines in the ranks of those willing to officiate youth sports. But then it goes off the rails; instead of just putting the blame on the obvious culprit of athletes and parents who behave poorly, Mushnick goes for a whole “The devil made me do it” approach, saying that they’re led to that, and led to it by…all the things he normally hates, even if they’re really not connected.

Last year, NASO conducted a national survey of 17,000 amateur game officials, male and female. Nearly half the respondents claimed “they felt unsafe or feared for their safety because of administrator, coach, spectator and player behavior.”

Sportsmanship — civility — within and around kids’ sports, they agreed, is in continuing, rapid decline.

And the adult authorities who hold the most influence over sports — from the folks in the truck who select the replays, to marketing strategists, to see/speak-no-evil game announcers, to pros tweeting boasts and threats, to those who select the network promos for their uncivil content, to the sneaker companies, to cable TV’s faux-hip pandering show hosts, to Roger Goodell, who declared that rehearsed immodesty “is natural enthusiasm” that meets with his approval — keep fanning the flames.