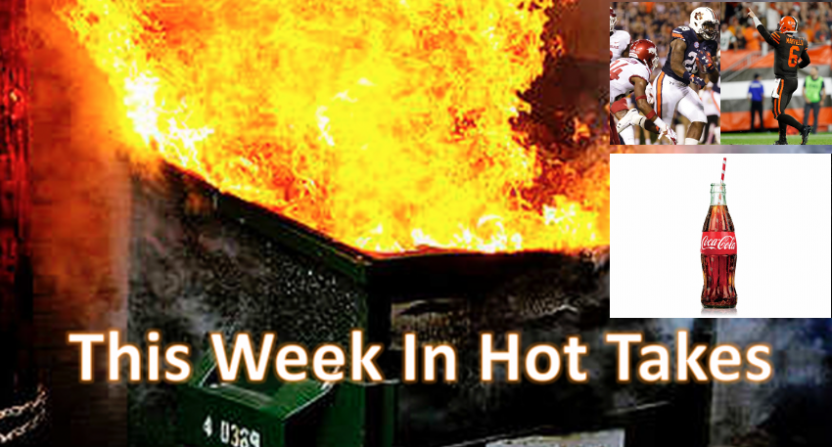 Welcome to another edition of This Week In Hot Takes, this time looking at the hottest sports media takes from Sept. 21-27.

The questions have been asked a zillion times over the last couple of weeks regarding Scott Frost and his decision last season to leave UCF for Nebraska?

…I believe his regrets and second thoughts come because the Nebraska job opened when it did. It’s no secret Frost wanted former coach Mike Riley to survive and win enough games to hang on to his job at least for a couple of more seasons.

You see, Frost wasn’t ready to leave UCF after last year’s perfect season. He was having too much fun coaching a bunch of kids he loved and living in a place he adored. He was a new husband and new father who wasn’t ready to uproot his family just yet.

And you know what?

He’s going to regret it even more when winter comes to Lincoln.

Yes, things aren’t going so well for Frost at Nebraska so far (and Bianchi actually acknowledges that it will likely take time to turn that program around), but it’s still a bold claim that he “regrets” the move. Yes, Bianchi softens this a bit by saying Frost would still take the Nebraska job if he had to do it all over again given his loyalty to that school (making this argument really more about second thoughts than regrets, and not very strong ones at that), and he seems to understand why Frost made that move, but still, the “no doubt about it” argument that Frost regrets leaving is a pretty hot take.

Sure, Frost and Nebraska aren’t doing so well yet, but rebuilds often take time. And Nebraska has advantages over UCF that could apply in the long run, including money and power-conference status. Maybe Frost’s move there won’t wind up working out at all, or maybe it will, but it’s far too early to try and get inside his head and insist that he “regrets” the decision.

4. Wally Hall writes that Arkansas “was as good as Auburn”…in a game they lost 34-3: Arguing that the local team deserved better than the final result is far from unheard of, but it’s a little unusual to do that after a game where they lost by 31 points. That’s what Arkansas Democrat-Gazette columnist Wally Hall did, though, and the paper’s tweet emphasizing that part of his column got ratioed hard:

The Razorbacks lost 34-3. But the truth was Arkansas was as good as Auburn, Wally Hall writes. His full column » https://t.co/VhDijRCjPN

Some highlights from the column:

On Saturday night, for the first time this season, the Arkansas Razorbacks showed improvement.

The Hogs were better everywhere but on special teams, which were un-special enough to handcuff the Hogs start to finish. The 34-3 score was not indicative of how well the Razorbacks played. Special-teams play dictated that final score.

…Some, mostly Auburn fans, will say the Tigers were hungover from the 22-21 loss to LSU the previous week.

The truth was Arkansas was as good as Auburn. The defense played well enough to win, and the offense was better.

The overall thrust of Hall’s column is that Arkansas improved significantly across the board from their loss to North Texas (which there’s an argument for) except for special teams mistakes. And yes, the special teams miscues were largely responsible for Auburn’s 17-0 halftime lead, which came from a 29-yard touchdown drive after a big kick return, a one-yard field goal drive after a fumble returned to the Razorbacks’ 2 (which really does speak to an impressive goal-line stand from the Arkansas defense) and a nine-yard touchdown drive after a deflected eight-yard punt led to a 11-yard return. A second-half 96-yard kick return made it 24-3. But special teams plays are part of the game, and you can’t really say that Arkansas “was as good as Auburn” when they were so lacking on that front. And also, an offense that only scores three points is not going to be good enough to win you many games.

Here's your grandfather's hot take on Baker Mayfield taking his phone out after the Browns winpic.twitter.com/b79u14Bb4X

“Five minutes later, he comes out of the locker room to go on the NFL Network set, and he had his phone in his hand. That was the number-one thing I looked at! When you look at NFL quarterbacks after the game, they don’t have their phone! Baker Mayfield’s first thought after that win was ‘I’ve got to get on social media and see what people are saying about me!'”

Joy Taylor smartly points out that it’s more likely Mayfield was looking at texts, including from his family, and McIntyre ignores that logic, saying ‘Oh, come on, Joy, don’t defend him! He’s a social media guy, who, like, favorites all the negative stuff you say about him!” Taylor asks “Did you fact-check this? Did you find if he was on social media?” And McIntyre goes “Uh, I did not look, because he, I think, blocked me for stuff I said last year.” (What, Jason, even with all those low seven figures, you can’t figure out how to open an incognito tab?) Taylor asks “What else was he supposed to do?” and McIntyre goes “Joy, that’s a very Le’Veon Bell move, and we know where he is right now.” Cowherd then says he doesn’t check his phone until after his shows, and that he would just shower and do interviews in Mayfield’s place (which, uh, is what Mayfield did, just looking at his phone while he was waiting), and McIntyre then goes “Sam Darnold isn’t looking at his phone!” And Taylor rightly notes that Darnold lost.

This is a stupid and absurd take, but it adds to the stupid and absurd takes that Fox has perpetuated about Mayfield. And Cowherd’s been the worst offender there, so it’s not surprising that this happened on his show. Remember when Cowherd criticized Mayfield to his face for celebrating one touchdown with fans instead of with teammates, and Mayfield promptly pointed out just how dumb Cowherd looked for caring about that? Mayfield wasn’t present to defend himself this time, but at least Taylor did, bringing some actual logic to the situation. And former NFL players like Martellus Bennett also pointed out how ridiculous this criticism was:

Lol its 2018 every player runs straight to their phones after the games. Especially after winning their first game ever in the NFL. Lol. The same way this dude probably ran to his phone after this segment to see what people were saying about him. ??? https://t.co/WGJibQFfiB

2. Bill James runs a poll on “the likelihood Kavanaugh’s accuser is telling the truth”: The two hottest takes this week weren’t on sports, but were from members of the sports media on Christine Blasey Ford’s accusations of sexual assault against Supreme Court nominee Brett Kavanaugh. First, noted baseball statistics writer (and current Boston Red Sox senior baseball operations adviser) Bill James decided to run a Twitter poll to see the level of belief of Blasey Ford’s accusations. He deleted it after a lot of backlash, but even the way he framed it was troubling:

oh me? I’d like to just set myself on fire, please. pic.twitter.com/TkwzJjO5UJ

First, James can be criticized for diving into those waters at all, and doing so not just with his own beliefs, but with an attempt to show off public votes. And as a stats writer, James is presumably very aware of the impact question framing has on results; this particular question has all its options implying some chance of a lie, which is a bold, problematic and non-neutral stance to take.

Moreover, while James is far from the only one running polls on the level of belief of Blasey Ford’s accusations (stats firms have done that, but with much more rigor than a Twitter poll), “likelihood” is a curious way to frame this; that’s asking not for belief or not of the claims (which is really the only thing people on the outside of this case can offer), but for an evaluation of the chances of a lie (which would be very difficult to impossible for even a seasoned psychologist to predict precisely, and which is a completely ridiculous question to pose to a general Twitter audience). This was not a great way for James to wade into this discussion.

1. Darren Rovell says Coke gained $3.14 million from a bottle visible during Christine Blasey Ford’s testimony: At least James’ take was on the actually relevant part of this situation, though. ESPN sports business reporter Darren Rovell is notorious for reducing everything to dollars, cents, and benefits to corporations, and boy, did he do that Thursday with a tweet during Blasey Ford’s Senate Judiciary Committee testimony, discussing…the value Coke gained from Blasey Ford drinking a Coke during testimony.

First, it’s completely tone-deaf to discuss marketing value during testimony reiterating sexual assault allegations against a proposed Supreme Court nominee. Rovell later tried to defend himself, but that didn’t go so well either:

Given my scope, I defaulted to a sponsor impact point of view on this tweet. I, in no way, sought to diminish the sensitivity surrounding today’s hearings.

Moreover, these kinds of value estimates are often hokey anyways, especially when it comes to a highly unusual event like this; the idea is that product placement in front of certain numbers of viewers has value (and in this case, it’s a ton of viewers), which of course is the basis of advertising, but those valuations fail to take into account the connotations around the appearance. This is not a Coke commercial with a controlled message; it’s someone happening to choose that drink (and someone who’s highly criticized from one side of the political spectrum) during very serious testimony.

And it’s hard to see Coke actually reaping millions in benefits from this. Yes, they would have had to pay millions to reach a similar audience with ads, but that’s incredibly different from having their product show up during a controversial Senate hearing. But beyond that, even discussing the marketing value is so far from the actual point of the hearing, and it’s just the latest example of Rovell trying to reduce everything to money, and doing so at the exact wrong time.