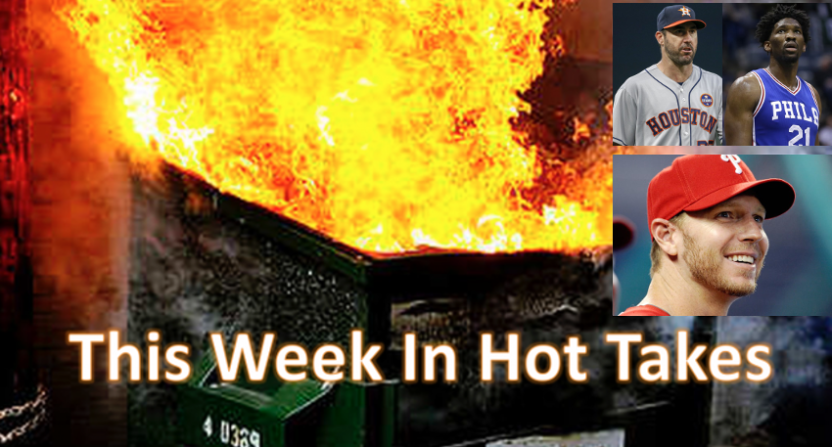 Welcome to another episode of This Week In Hot Takes, this time looking at the hottest takes from Nov. 3 to Nov. 9. There’s no surprise what this week’s hottest take is, but we have some more to say about that one, and there were plenty of other hot takes this week as well.

5. Skip Bayless blames Carson Wentz for a strip-sack Nick Foles gave up: Undisputed co-host Skip Bayless is well known for hot takes that defy the facts, but he managed to top himself this week, criticizing Philadelphia Eagles’ quarterback Carson Wentz for conceding a strip sack against the Denver Broncos. The problem was that the strip-sack was actually conceded by backup Nick Foles, which Bayless should have known considering how he said earlier in the show that he “watched the whole game.” Sadly, the video of this has been pulled off YouTube, and Fox’s own clip of Bayless’ infinite Cowboys-versus-Eagles argument with co-host Shannon Sharpe (seriously, they discussed this for over half an hour Monday) only includes 10 minutes of the debate, doesn’t include the part in question. But here’s what we wrote about it Monday:

Sharpe praises [Broncos’ linebacker Von] Miller and says he’s relentless, and Bayless responds “He wasn’t yesterday, I watched the whole game.” Sharpe says “Didn’t he get a strip sack?” and Bayless says “Oh, did he strip-sack Carson Wentz? Oh, thank you for bringing that up, I forgot about that.”

Yep, Skip, you did forget about that.

4. Bob Ford calls load management “a load”: The idea of NBA teams resting players has produced plenty of fiery takes over the years, and Philadelphia Inquirer columnist Bob Ford has produced the latest one, throwing in some good old “back in the day” arguments for good measure. Here’s Ford’s piece blasting the 76ers for resting center Joel Embiid, titled “Wilt Chamberlain and the science of ‘load management’“, which is a whole imagined conversation (another classic hackneyed columnist device) about how Chamberlain wouldn’t have taken days off:

“Load management. How much you work when you’re on the court. How many minutes you play. Whether it’s a fast game or a slow game. Whether we played the night before. Our Performance Research and Development staff will be getting together with our Analytics and Strategy people every morning and I’ll get a printout with instructions concerning every player on the roster.”

…“Coach, I’m averaging 48.5 minutes per game. I play every tick of every game and every tick of overtime. I haven’t sat down during a game since we had that leak in the roof and Gotty climbed up there to fix it so we wouldn’t have to refund the tickets.”

“I know, I know. But that was then. Now, we’ve got to worry about load management.”

Criticizing the 76ers’ roster management is one thing, but it’s somewhat notable in this discussion that Embiid missed the entire 2014-15 and 2015-16 seasons thanks to a broken bone in his foot. And while we’re on the subject of former star centers, how about Bill Walton’s  discussion of how injuries and team pressure to play through them ruined not just his career, but his post-basketball life? Or how Yao Ming has talked about how his foot is “forever numb” thanks to his injuries? But sure, players with injury concerns should regularly play entire games, and teams shouldn’t do anything to be cautious with them. (It’s notable that the Sixers have been criticized for playing Markelle Fultz despite a shoulder injury, so it’s not like they’re even the world’s most conservative team when it comes to injury prevention.) In any case, Ford got nicely schooled on Twitter:

TIL Bob Ford would rather invoke Wilt Chamberlain than acknowledge Yao Ming, Bill Walton, Arvidas Sabonis, Andrew Toney, and countless others careers were cut short bc of antiquated approaches towards "load management".

3. Stephen A. Smith rants about the 76ers’ “disgusting” slogan of “Trust The Process”: Speaking of hot Sixers takes, ESPN First Take cohost Smith went off on the team this week as well. This also came out of their decision to give Embiid some rest, but then turned into a whole rant about their tanking for high picks and “Trust The Process” approach:

Here’s a transcription of Smith’s response when Molly Qerim asked if he was starting to trust the process, from Andrew Joseph at For The Win:

“Hell no. And I’m not laughing. I don’t play that game, not even a little bit. I despise it. I can’t stand it. My man Mike Missanelli who does his radio broadcast in Philadelphia, I’ve gotten on him about it. I’ve gotten to the point where I don’t even allow him to ask me that question because he knows it’s gonna tick me off … They know I don’t play this mess with this process. And it’s very, very simple because I don’t believe that any franchise should have the right to lose on purpose for years – for years! – while still charging the paying customer. And you’re making no effort to win. I think it’s disgraceful. I think it’s disgusting. I can’t stand it. And I don’t want to hear a damned thing about it. A matter of fact, I’m gonna start cursing people out that ask me about it.”

Sure, there are debates to be had about if tanking is problematic, and the NBA’s even changed its rules to try and reduce the incentive to tank. But Smith’s take here is ludicrously over-the-top, as is pretty usual for him. However, this is perhaps milder than the “absolute ATROCITY” he called the Sixers’ approach back in 2015:

What the @Sixers are doing to their fanbase is an absolute ATROCITY. The commissioner should intervene. pic.twitter.com/1WQ8LSpXR6

2. Shawn Windsor says Tigers’ fans  cheering for Verlander “proves how soft we are in Detroit”: In “crusty old newspaper columnist bingo,” “discussing who fans should and shouldn’t cheer for” is almost a free square. The latest to opine along these lines is Detroit Free Press columnist Shawn Windsor. Windsor discussed Tigers’ fans who decided to cheer for long-time Tigers’ pitcher Justin Verlander following his trade to Houston and supported him through the World Series, and he struck a weird mix of praising them while still criticizing Detroit’s identity in the process. Here are some lowlights from Windsor’s piece, titled “You fans rooting for Justin Verlander prove how soft we are in Detroit“:

Justin Verlander finally won a World Series. What you think about that says a lot about you as a fan. Just as our reaction to his victory on the whole says plenty about us a region.

It’s hard to fathom a similar scenario unfolding in a place like New York. Not to mention places like Boston or Philly or Baltimore. Or even Los Angeles, the most bandwagon of sports towns, where rooting for a former player on another team would seem … uncouth, and provincial.

…Or try to think about Red Sox fans reacting the same way you did last night, when the Astros beat the Dodgers in Game 7, sending gooey, positive vibes to Big Papi, after he’d finally gotten a ring in San Diego after years of close calls in Boston.

You can’t think about it. Or imagine it. Because it wouldn’t happen. At least not to the degree it did here the last month as Verlander chased his ring from Houston, and took a portion of Detroit with him.

To which I say: good for you.

This may be a tough town, but it ain’t a soulless one.

You can be a great sports town without being ruthless.

…Turns out our inner sports fan is as soft as cotton candy. Verlander’s ride was just more proof. And that’s not a bad thing at all.

I mean, on one level, it’s sort of nice that Windsor isn’t entirely disapproving here? And it’s also sort of nice that he includes some paragraphs saying he understands those who wouldn’t root for Verlander after his departure as well. But this is still rather absurd; fans’ individual decisions to cheer for Verlander or not doesn’t say much of anything about Detroit as a “soft” city, whether that’s positive or negative, and plenty of fans in those other cities Windsor mentions did wind up rooting for long-time local players to win championships elsewhere, like Ray Bourque (Boston Bruins to Colorado Avalanche).

Sure, many others couldn’t get behind rooting for guys they liked when they wore a different uniform, and moves like Bourque’s had numerous detractors too. But that does much more to show that fandom is highly individual, rather than something that follows a prescribed set of rules or something that says anything about its city. And a non-Detroit team has to win a World Series between Houston and Los Angeles; whether Detroit fans chose to cheer for Verlander and the Astros or not really doesn’t matter much. But hey, at least this let Windsor fill some column inches by telling others what their reaction means for a metropolitan area of 4.3 million people as a whole, while giving him an excuse to moan about the state of local sports in the process.

Some of the worst comments:

“You’ve got to get your rocks off by whatever it is you do that cheats death.”

“That guy’s like the bad guy to me. You’ve got a family! And you’re going to screw around in a little toy plane?”

“You’re a multimillionaire with a loving family, and to you, you have to go get that thing where you can divebomb from 100 feet to five above the water with your single-engine plane with your hand out the window. ‘Wheee! Wheee! Yeah, man, look at the G-force on this! I’m Maverick! Pew pew pew! Yeah, man, look at this, this is so cool.’ And you die! Splat!”

“If I die helicopter skiing, you have the right to do the exact same thing I’m doing to Roy Halladay. He got what he deserved.”

“Who was it, Dale Earnhardt, the race car driver who died? I root for the wall!”

That is…a take, especially the day after someone’s death. What’s amazing is how completely overboard Felger goes, especially when it comes to the sound effects. And what gives him the right to criticize someone else’s choices that way, and to assign so much blame to Halladay when many details aren’t known yet? In fairness, Felger did apologize the following day:

But he still gets a very-much-deserved top place here.