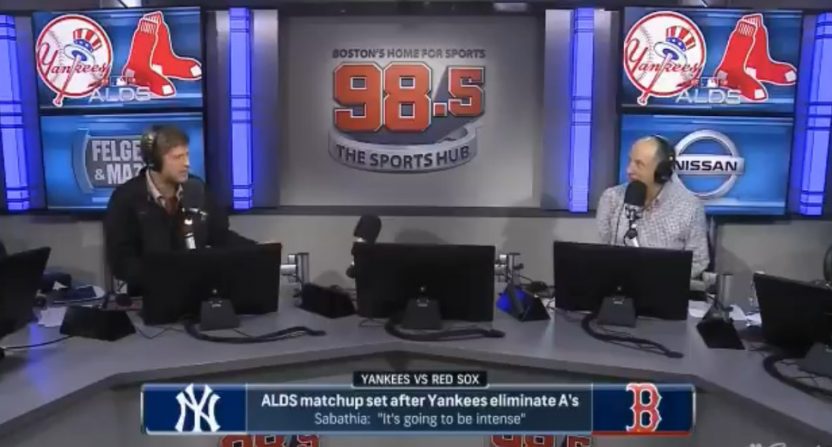 The New York Yankees-Boston Red Sox ALDS matchup, the first postseason matchup between the clubs since 2004, should be wonderful for Turner’s ratings. But boy, is it not wonderful for the sports talk radio it’s producing. It’s maybe the least shocking thing in the world that some radio hosts here are already going at the opposing fanbase, but the lengths Mike Felger, Jim Murray and Tony Massarotti of Boston’s 98.5 The Sports Hub (and NBC Sports Boston, where their show is simulcast) took it to Wednesday were pretty remarkable.

Here’s the clip, via Funhouse:

Boston radio hack Michael Felger and his sidekick @BigJimMurray, who enjoys wearing sunglasses indoors, make fun of the "Goombah animals" who root for the #Yankees. pic.twitter.com/NeppFGbhpd

A partial transcription (there’s some parts where they’re talking over each other not included here, and we’re trying to be as accurate as possible with who said what, but it may be slightly off):

Murray: “Man, that house full of goombahs (apparently slang for people of Italian descent, and not just a Mario villain), they get loud, and they are into it, every single pitch.”

Felger: “It is a house full of goombahs! The whole thing, there’s very few minorities, very few women, very few kids. It’s one dude with a chain and a Yankee jersey hanging off the next!”

Murray: “Yeah, the gold chain with the Italian horn.”

Massarotti: “I’m telling you, that was the most striking part of that game last night. You forget, you forget what it’s like in there in October, for a guy to stand on that mound and have to try to get people out. When you’re wearing an opposing uniform, it’s deafening.”

Felger: “Where’d all those dudes come from? With that dudefest?”

Murray: “The primordial ooze. They crawled out of it.”

Felger: “Seriously. It’s like they emptied the swamp. And the same dude poured out. White, unshaven, I know I shouldn’t talk, but it was all the same guy. 50,000 of them, hanging off each other. Like animals!”

Felger: “Where’d they all come from?”

Felger: “Bring your kids! Or your girlfriend! Wow. I didn’t appreciate that, or fully appreciate the level at which the demographic makeup of that crowd. [Yankees’ first baseman Luke] Voit’s the goombah with the chest hair (as he shows off his own chest hair).”

Felger: “He looks like every guy in the stands!”

Massarotti: “Which is why they love him.”

That is…quite the conversation. And it’s already provoking as reasonable of a debate as you’d expect between Yankees and Red Sox fans about whose fanbase is worse, so we can just turn off the internet now. On the bright side, at least Felger and Mazz didn’t make any plane crash noises this time?