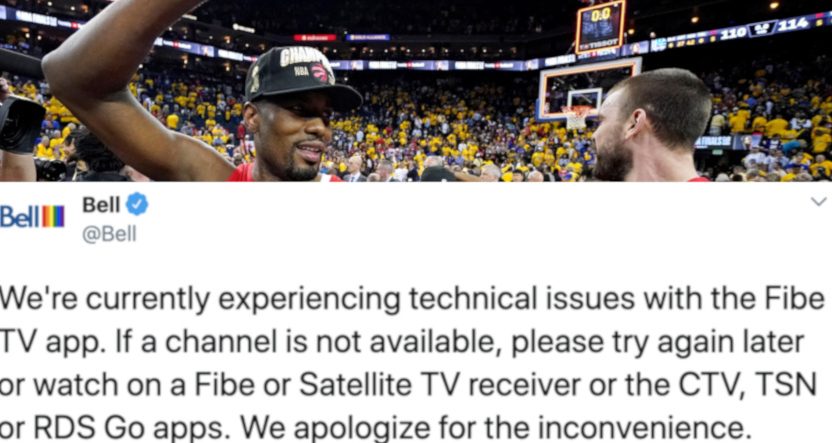 A team owned by a media conglomerate winning a title while drawing strong ratings seems great for that media conglomerate on multiple levels; good ratings involve some new or retained subscribers and produce good ad revenue in the short term, while the team’s success will likely lead to better long-term ratings and more demand for tickets, merchandise and sponsorship deals.

That’s the case with the Toronto Raptors’ NBA title win; the Raptors are owned by Maple Leaf Sports and Entertainment, which both TSN parent Bell and Sportsnet parent Rogers have 37.5 percent stakes in (MLSE chairman Larry Tanenbaum‘s Kilmer Sports owns the other 25 percent). Both Bell and Rogers did very well off their title run, as Christine Dobby explores in The Globe And Mail. However, there’s at least some irony to be found in the fact that a telecom-owned team saw two big outages for some subscribers to those telecom companies in crucial moments of Game 5 and 6 of the NBA Finals against the Golden State Warriors.

This started last Monday during Game 5 in Toronto, with outages that impacted customers of both Rogers’ Sportsnet Now over-the-top service and Bell’s Fibe TV streaming TV service. The Globe‘s Stefanie Marotta wrote that the outages impacted thousands of Canadians, with some Sportsnet Now customers experiencing authentication error messages during the first half and Bell’s Fibe signal going down during the crucial final 30 seconds (Golden State would win 106-105).

Sportsnet acknowledged the issue on Twitter 30 minutes into Game 5 and then opened their stream up without authentication 30 minutes later (the B/R Live “The Match” problem-solving approach, except without public discussion of refunds. A Sportsnet spokesperson told Marotta they’d work with customers “on an individual basis,” so the affected customers may still have paid their $27.99 CAD ($20.91 USD) a month (or $9.99 CAD for a week) for that service only to have it fail at a critical time.

But Fibe TV’s crash was even more disastrous, as it meant “several thousand customers” lost service “because of a ‘hardware malfunction’ that dropped the TV channels for about 10 minutes,” including the final 30 seconds of the game. And while Bell offered “goodwill credits” to those affected, but as Marotta wrote later last week, Fibe Alt TV (the app-based version of the service) then crashed during the final moments of Thursday’s Game 6, meaning that some subscribers didn’t actually see the moment when the Raptors won the title:

Several thousand customers watching on Thursday night on Fibe Alt TV (an app-based version of the television service) and Fibe TV using devices other than their televisions were affected by a “malfunction in the hardware supporting the app,” according to Bell spokesman Nathan Gibson.

During the final moments of Thursday night’s game, Bell posted a notice on Twitter stating that it was experiencing technical issues with the Fibe TV app. The company recommended that customers “try again later” or access the game on a Fibe or Bell Satellite TV receiver or the CTV, TSN or RDS Go apps.

Christopher Robinson-Keys, a Raptors fan and Bell customer in Toronto, said those options were not available because he accesses his Fibe Alt TV service by casting the stream from his phone to his television. He and his wife tried restarting the Bell app, searching for a different online stream and refreshing the score on their phones until they saw that the game was over and the Raptors had won.

“To not be able to watch the last three minutes was extremely disappointing. I felt both happiness and extreme disappointment,” he said. His memory of the final moments of the game won’t be of the Raptors winning, but instead of his TV going dark, he said. “Bell has some issues to fix.”

Yeah, that’s not so great. And it goes to show some of the continued issues with streaming sports services, which often have their biggest problems during high-demand moments such as important games. Many had issues with CBS’ streaming apps during this year’s Super Bowl, while YouTube TV went down during last year’s National League Championship Series (and the NBA opening night) and during the England-Croatia World Cup semifinal last summer. DirecTV Now has also had problems during NCAA conference championship games and the College Football Playoff, while B/R Live had issues with lacrosse and NBA games, and Canadians are well aware of how many problems DAZN has had with NFL Sunday Ticket.

But streaming services are still becoming more popular, thanks in part to lower prices. And that’s maybe especially an interesting discussion in Canada, where both TSN and Sportsnet offer over-the-top subscriptions to their full linear TV feed (something not yet done in the U.S.; by contrast, ESPN+ and B/R Live are over-the-top services focused on additional content that isn’t on TV). While Sportsnet Now’s $27.99 CAD a month for one group of channels over the top is a fair bit of money (and is way more than those channels would bring in in per-subscriber fees through cable or satellite), it’s a much better deal than buying an actual cable or satellite TV package, and so if you only care about Sportsnet content, that might work for you.

The home feeds of the Raptors’ playoff games were split between Sportsnet and TSN, so Sportsnet Now wouldn’t have got viewers all the games, but TSN Direct is also available (for $24.99 CAD a month). And both of those services offer shorter-term (day or week) passes, so viewers didn’t necessarily need to pay for a full month just to watch the Raptors, and even those two monthly fees combined are less pricey than quite a few cable packages.

Dobby’s story Monday said signups spiked for those services during the Raptors’ run, so Bell and Rogers probably profited there as well, even if they did hand out some credits and discounts. Oh, and if you want a cable or satellite-ish streaming package, Fibe TV is that (packages start at $46 CAD a month under a promo price, rising to $62.45 after that), so they may have seen some subscriber growth as well during the Raptors’ playoff run. But outages at key moments for both Sportsnet Now and Fibe TV are just the latest cases of streaming sports services crashing at critical times.

Of course, that doesn’t mean that these services don’t work the majority of the time, that their outages affect all of their customers, or that no one should subscribe to a streaming sports service. But it’s yet one more data point of some streaming services proving unreliable at a critical time, and that’s something to be aware of for those considering jumping to streaming services. And these outages are particularly notable, considering that they came during games that set Canadian ratings records, and games of a team owned by the telecom companies in question. Even Alanis would probably find that a little ironic.

[The Globe and Mail; illustration is Bell’s tweet (via iPhoneInCanada) over a photo of the immediate post-game of Game 6 from Kyle Terada of USA Today Sports]