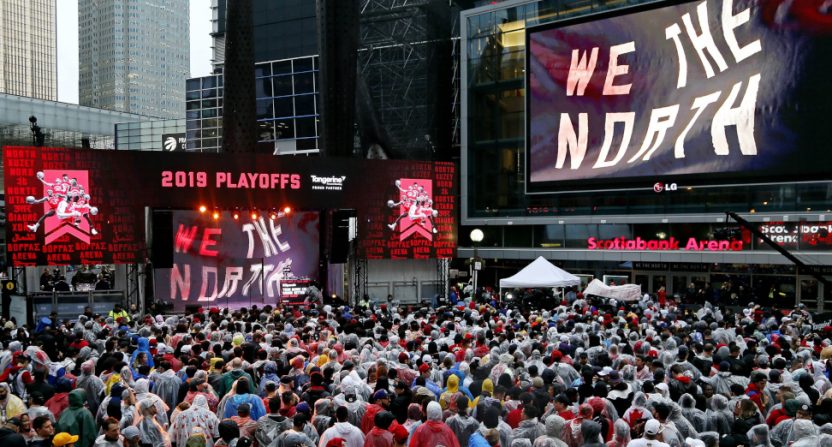 The U.S. ratings for this year’s NBA Finals have been historically low so far, which was to be expected considering that there was only one local U.S. market thanks to the presence of the Toronto Raptors. However, the ratings in Canada have been great for TSN and Sportsnet (which split the series), and that was particularly true with Friday’s Game 4 (a 105-92 Toronto win). TSN announced Monday that their Game 4 broadcast not only was the top sports broadcast of the year so far, it was the top NBA broadcast ever in Canada:

ON THE BRINK: The @Raptors’ Game 4 win on Friday night not only put them one win away from their first NBA Championship, but was also the top @NBA broadcast on record in Canada, with an average audience of 4,631,000 (TSN+CTV2+RDS) #WeTheNorth pic.twitter.com/2L8FIlE7Gg

Game 4 was also the highest English-language sports broadcast of both the calendar & broadcast years-to-date, surpassing the Super Bowl.

Interestingly enough, many Canadians are watching a very different broadcast than the U.S. one. Because of how the Canadian broadcast deals are drawn up, TSN and Sportsnet have the right to continue doing their own broadcasts for Raptors’ playoff games, unlike U.S. local TV broadcasters who have to hand it off to national networks in the later rounds of the playoffs. So Raptors’ owner MLSE gets to continue producing broadcasts (their broadcast setup was profiled by SportsVideo.org’s Jason Dachman here), and Raptors’ play-by-play broadcaster Matt Devlin (recently profiled by SI’s Jacob Feldman here) gets to keep calling the games on TSN (with Jack Armstrong) and Sportsnet (with Leo Rautins).

Canadians can still watch the national U.S. broadcast as well, either on CTV2 (for TSN games) or CityTV (for Sportsnet games), or on cross-border ABC stations. But with the ABC stations, as with other U.S. broadcasts of material shown at the same time on Canadian TV (which will soon again include the Super Bowl after a brief hiatus, thanks to President Trump and the NFL), that gets simsubbed, so they see the Canadian commercials. But in any case, it looks like most are opting for the Devlin-Armstrong/Rautins calls on TSN and Sportsnet.

That’s just the English-language audience, though, and if you throw in the average audience of 983,000 for this year’s Super Bowl on French-language RDS, that puts the total tally at 5.3 million, ahead of Game 4. And keep in mind that the TSN numbers above include a French broadcast on RDS; that number isn’t separated out, but it must be less than 300,000 for “highest English-language sports broadcast of the calendar year to date” to be true. So while this number is quite big, it’s not bigger than the Super Bowl English audience in a non-simsub year, or than the total Canadian Super Bowl audience this year.  But it beat out Game 2, which set the previous Canadian NBA record with an average of 4.3 million viewers. It’s worth noting that while these are great numbers for sports this year, though, they don’t beat out some previous highs, like the Toronto Blue Jays’ playoff run in 2015 or the Canucks-Bruins Stanley Cup Final in 2011:

But all in all, the Raptors are producing unprecedented numbers for the NBA, and better English-language numbers than for the NHL (not surprising considering Canadian teams again finding a lack of postseason success this year) or for the Super Bowl or the CFL’s Grey Cup (around 3.3 million English and French viewers on average in 2018, around 4.1 million in 2017). And they’re giving the NBA a good news ratings story; as per the league, Game 4 delivered an aggregate average audience in the United States and Canada of 17.7 million viewers, a four percent rise from the 17.0 million average aggregate for Game 4 last year (with 16.24 million of those being U.S. viewers, so about 760,000 Canadians).

However, while more viewers in total watching is nice for NBA exposure, it’s really only good news for TSN and Sportsnet in terms of profit. The NBA doesn’t directly make or lose money based on viewership for particular games, as they’ve already sold the rights. And for this particular final, a massive jump in interest in Canada and a significant decline in interest in the U.S. means their Canadian rightsholders benefit and their U.S. rightsholders don’t, with those U.S. networks perhaps having to offer makegoods to advertisers as a result of lower viewership. So those Canadian viewers aren’t helping ABC any. (Funnily enough, even the ones watching on ABC don’t count for ABC, as Nielsen only measures U.S. viewers.)

Of course, good ratings could mean the next TV deal is worth more to the league, while bad ones could hurt it. However, given that the NBA’s U.S. deal runs through 2024-25, the 2019 ratings with a highly anomalous market aren’t likely to be a big factor there. A more notable effect could come in Canada, where the NBA can point to this Raptors’ run as the upside of what their content can be worth if the Canadian team does well. But the Canadian broadcasters can make the counterargument that this year is more of an exception than a rule, and that most NBA Finals aren’t going to draw nearly as well for them. At any rate, they get to enjoy this one, and they’ll likely be celebrating the ratings for Monday’s Game 5 and any subsequent games much more than their American counterparts.

[Update: This post has been corrected to indicate that it’s Rautins rather than Armstrong for Sportsnet games, and that the ABC broadcasts are also available on Canadian channels.]