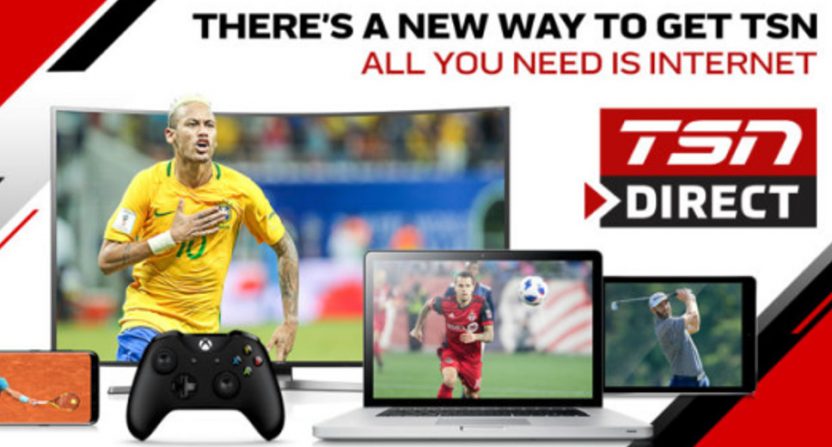 A big push in the cord-cutting community has been for sports networks to offer full subscriptions outside of a cable bundle, but in the U.S., that’s been a no-go so far. While there are a growing array of over-the-top offerings like ESPN+, NBC Sports Gold and B/R Live, none of those include full access to their associated network’s linear content, and while there are growing numbers of third-party skinny or streaming bundles that offer that kind of access with lower costs than traditional cable, they’re still bundles.

But in Canada, the story is rather different; Rogers Sportsnet launched a Sportsnet Now over-the-top service in March 2016, and Bell Media’s TSN has now followed suit with TSN Direct (and French-language RDS Direct). Here’s more from the release they issued Thursday afternoon:

Canadians have a new way to get TSN and RDS with the introduction of TSN Direct and RDS Direct. Canadian sports fans now have a digital subscription option to access TSN, including the network’s five feeds featuring 60+ iconic championship events, on-demand content, and exclusive bonus streams of major sporting events. French-language content from RDS, RDS2, and RDS INFO, is also available through its own direct, monthly subscription.

TSN Direct and RDS Direct will be available tomorrow (Friday, June 8), providing a new subscription option for Canadians in advance of the 2018 FIFA WORLD CUP RUSSIA™. All 64 matches air live and on demand beginning Thursday, June 14 on TSN and RDS platforms.

…“Providing choice and variety has been a driving force behind our programming strategy, and we know Canadian sports fans want options in terms of how they watch and consume our content,” said Stewart Johnston, President, Media Sales, Marketing, and TSN. “We’re excited to introduce TSN Direct to sports fans nationwide, allowing them access to their favourite sports and our extensive championship events through a monthly digital subscription.”

Interestingly, news of this leaked before the actual announcement, with Drew Edwards of 3 Down Nation writing about the new “TSN Direct” option appearing on TSN’s website. But now the details are out, and they’re interesting; access to TSN and RDS will be available for $24.99 Canadian ($19.27 U.S. at present) a month without a contract, which is the same price as Sportsnet Now. And while that’s a lot more than, say, the $5 U.S. a month being asked for ESPN+, what’s being offered is much more substantial. This is complete access to all of TSN’s five linear feeds plus the digital-only content previously, while ESPN+ is offering some new digital-only content, but isn’t offering access to its linear content (or to its ESPN3 authentication-required streaming content).

There’s been rising demand for a way to watch TSN content like the World Cup and the Canadian Football League without a cable subscription for years, and that’s now finally on offer. And if TSN content is the main thing you watch on cable, this will likely be a significantly cheaper way to do that. If you want TSN, Sportsnet, and potentially a few other channels, cable (or streaming bundles like Bell’s CraveTV) may still be more worthwhile, but this certainly seems like it may make financial sense for a number of people who are most concerned with the sports on one network or the other one.

Why have Canadian networks taken this plunge while American networks haven’t? Well, at least some of it may about these networks’ ownership. Both Rogers and Bell are massive telecom companies, and they offer internet and cable packages, not just programming. It’s somewhat comparable to NBC parent Comcast’s U.S. setup (and it’s maybe interesting that Comcast has been reportedly at least contemplating their own streaming service), but that’s very different from the likes of ESPN and Turner, which are part of larger content companies (Disney and Time Warner respectively), but not ISPs. (Although that will change if ATT’s acquisition of Time Warner is approved.) So Rogers and Bell still do pretty well if someone drops cable with them but buys a more expensive internet package and an OTT sports service, whereas, say, Disney can’t capitalize on the selling-internet side.

Something else that may be a factor here is just how many Canadian rights are with either Bell or Rogers. In the U.S., even just the big rights are spread out over a whole lot of cable networks, from ESPN through FS1 through NBCSN, TNT and more. But TSN and Sportsnet have the vast majority of the cable sports rights in Canada, and that maybe adds some appeal to the idea of cord-cutting and buying just a OTT subscription to one or both of these networks. That’s going to let you see a whole lot. And it should be noted that while the price point’s much more than the per-subscriber fee these networks get through cable (an argument that many U.S. networks have used to defend the bundle and say it doesn’t make sense for them to offer a full-OTT option), it doesn’t appear to be meeting with a ton of resistance, and may actually be cheaper for many who mostly just use cable for sports.

Of course, there’s some growing competition in Canada (particularly from streaming-only service DAZN, which just added Champions League rights), but even that may have helped push TSN towards this decision. Streaming sports is becoming more and more common, and it makes some sense for them to at least offer a product in that arena. And this looks like a great time to launch it, with their World Cup rights and with the start of the CFL season fast approaching. We’ll see if any U.S. network ever takes a similar plunge, but this certainly appears to have worked out okay for Sportsnet over the last couple of years, and TSN’s now deciding to join them. And while many things often come to Canada late, that country’s well ahead when it comes to sports networks offering full OTT options.