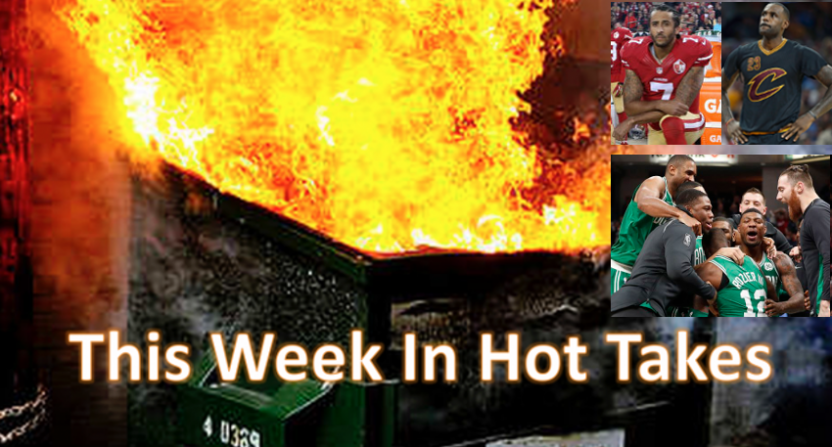 Welcome to another edition of This Week In Hot Takes, this time looking at the hottest sports media takes from May 18-24.

5. Darren Rovell says Vegas Golden Knights are nowhere near Leicester City because of…Jamie Vardy’s salary?: There’s been plenty of discussion about the Vegas Golden Knights advancing to the Stanley Cup final in their first season of existence, one of the most impressive underdog performance across sports considering that their title odds started at 500-1. Of course, there are showings from even bigger underdogs, such as 5,000-1 Leicester City in the Premier League in 2016 (even if those odds were significantly inflated over their mathematical chances to get people to bet). But Darren Rovell, ESPN’s expert at reducing everything to dollars and cents, decided to rain on the Vegas parade, and did so not even by referencing the odds, but by referencing Leicester player Jamie Vardy’s salary eight years before:

Love the Vegas Golden Knights story, but it’s not close to what was done in Premier League by Leicester City in 2016. One of their stars, Jamie Vardy, was making $44 A WEEK in 2008.

That’s not a great comparison. For one thing, Golden Knights’ players like Nate Schmidt were making $0 a week eight years ago in the NCAA. For another, yes, Vardy started his career at Stocksbridge Park Steels F.C. in the eighth level of the English football league system and made very little there, but that was when he was in his teens, and he moved to the fifth level by 20 and joined Leicester (then in the Championship, the second level) by 25. And while Vardy’s story is one of the most remarkable, he’s far from alone in the lists of players to start their careers at small clubs. But the really absurd thing here is claiming that it’s the weekly wages of one player eight years earlier that make it obvious that the Leicester story is a bigger upset, and shouting that in ALL CAPS like that makes it self-evident. Athletes aren’t always paid what they’re worth, and one player’s salary is not the crucial element here. Rovell’s probably right that Leicester was a bigger upset, but he’s using terrible logic to argue that point.

4. Albert Breer argues that no NFL evaluator thinks Colin Kaepernick can start: We’ve often complained about the amount of publicity given to the views of anonymous executives and scouts, given that they have biases and agendas that can impact their comments and given that there are no consequences for an anonymous quote. Albert Breer of The MMQB is one guy who’s been leading the “Colin Kaepernick isn’t being blackballed, he’s just not good” train for a long while, and this week, he brought in the views of some anonymous executives to support that:

The No. 1 reason Colin Kaepernick is unsigned: He's not considered a starting-caliber player by any NFL evaluator anymore. Work from there.

It’s unclear if Breer actually surveyed all NFL evaluators there or if that’s an extrapolation from the people he talked to, but either way, this isn’t a smart comment from executives, and it’s not a smart argument for Breer to advance. Kaepernick’s 2016 adjusted net yards per attempt, which only considers his passing ability, was better than the 2017 performances put up by 10 teams’ best quarterbacks, and was similar to seven more. But even if teams didn’t want him as a starter, it’s quite clear that his on-field performance is better than many second- or third-string quarterbacks that have been signed.

There are other reasons why Kaepernick hasn’t been signed, specifically worries about him being a “distraction,” and whether those reasons are enough for every single team to not sign him will be explored in his collusion case against the NFL. But arguing that Kaepernick isn’t good enough to be a NFL starter is absurd, especially given the quality we’ve seen from many starters, and it’s only serving to advance the league’s argument that there’s no collusion here. If Breer can demand proof that fans yelled racist taunts at Adam Jones, shouldn’t he be demanding some proof that Kaepernick isn’t actually good despite all the stats that say he is? Oh, and this isn’t the first time Breer’s tried to diminish Kapernick with anonymous quotes and opinions of dubious merit, so it falls into a nice pattern for him.

3. Rob Parker says “I blame LeBron 100 percent for the loss”: Yes, Rob “Is he a brother or a cornball brother?” Parker still has a sports media job at FS1, and yes, he’s still making absurd arguments. Here’s one from Undisputed Thursday, where Parker said that the Cavs’ 96-83 Game 5 loss to the Celtics (where LeBron James had 26 points, Kevin Love had 14, and no other Cleveland player reached double digits) was the fault of James.

“I blame LeBron 100 percent for the loss.” Shannon Sharpe’s “For real?” is a nice interjection, and Parker then goes, “Yes, for real! And you know what, Shannon, I know you’re going to bring up the supporting cast, Kevin Love the only other one who had over double digits, I get all that, but LeBron knew all that too coming in, Skip. And I’ve seen LeBron deliver big Game Fives on the road when it mattered. …This was subpar! This game was not what they needed in this situation! He’s out, he’s fatigued, he looks like he’s uninterested.”

No one’s going to argue that this game wasn’t James’ best performance, but blaming him for the loss is a heck of a stretch considering how poorly most of his supporting cast played. He hit 11 of 22 shots from the field, while Love hit six of 13 and the other three Cavs’ starters combined went two for 14. And singling him out here is typical LeBron-bashing, and typically dumb from Parker.

2. Britt McHenry argues that Colin Kaepernick donated his salary as a tax write-off to “play you”: Former ESPN reporter turned Fox 5 DC conservative talking head Britt McHenry has dropped plenty of hot takes, but this one stood out:

If I made $39 million on ONE contract NFL deal and also came from a rich family, please, PLEASE think critically about why I’d donate a season of salary. Hello tax write off. All the pub for 1 mil vs 39 mil guaranteed. Libs & Long brothers play you.

It even got criticism from former NFLPA president Kevin Mawae, a self-described conservative and regular Fox News viewer:

And I consider myself to be a conservative as well, and ONLY watch @FoxNews

That’s quite the hot take from McHenry, but very much in keeping with her usual standards.

1. Skip Bayless calls the Celtics “overrated,” says they “got exposed for what they were: The many lopsided games in these NBA playoffs have led to some hilarious overreactions about the state of each series, and one of the best comes from Fox’s Skip Bayless. On Undisputed Tuesday following the Cavs tying the series at two with a 111-102 win, Bayless called the Celtics “overrated” and said they “got exposed”:

"I'm getting sick and tired of the Boston Celtics. I've seen enough. They're overrated. They got exposed in Game 3 and exposed in Game 4 for what they were. They were the 18th ranked offense in the entire NBA and that was with Kyrie Irving." — @RealSkipBayless pic.twitter.com/AJw5Ro2PIo

That quote was so crazy Fox put it on a graphic:

And he repeated this in another segment:

“I heard one analyst after after another say the Celtics are just better than the Cavaliers, and I’m like, no, they’re not!”

That decisive Celtics’ win in Game 5 makes these comments look pretty silly, especially considering that Bayless is mostly doing this to degrade LeBron’s accomplishments (a running theme for him). And yes, absolutely, the Cavs can still win the series. But even if they do, it will be against a good team, and a team that’s given them all that they can handle. Not one “exposed for what they were.”