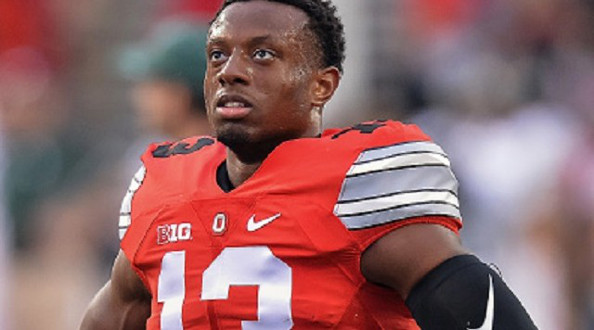 In the days ahead of any draft, and particularly the NFL draft, there are always a wave of stories of anonymous scouts and personnel guys questioning prospects for a variety of bizarre reasons. The latest, and one of the weirdest yet, is an anonymous NFL scout telling Bob McGinn of The Milwaukee Journal-Sentinel that Ohio State cornerback Eli Apple is a risk thanks to his lack of cooking prowess:

3. ELI APPLE, Ohio State (6-0 ½, 202, 4.39, 1): Third-year sophomore from Voorhees, N.J. “He got beat probably more than you want but he’s got tremendous upside,” said one scout. “He is too young (20) to be coming out but he is so you’ve got to project what he’s going to be. I think he’s going to be a pretty high-level starter.” Started 27 games, finishing with 86 tackles (7 ½ for loss), 4 picks and 18 PBUs. “Some there (OSU) were worried he wouldn’t break 4.6 and then popped the (4.39),” said another scout. “They were surprised he ran that well. I worry about him because of off-the-field issues. The kid has no life skills. At all. Can’t cook. Just a baby. He’s not first round for me. He scares me to death.” Wonderlic was 21. “He probably has as much talent as anybody but he, like a lot of those Ohio State guys, is inconsistent,” said a third scout. “He squats, and receivers run by him. He’s more in catch-up mode than reaction mode. He bothers me a little bit.”

The “can’t cook” accusation shouldn’t have any merit even if it was true, but Twitter comments from Apple’s mother and from former teammate Ezekiel Elliott suggest it isn’t:

Eli has made me some fire fried chicken and mac and cheese. The source seems to be pretty unreliable

Btw, Eli's dad is a retired five star chef. We eat well. So stop playing with our name. Next time you say our name, put some respeck on it

And Apple himself took issue with this, both on Twitter and in comments to Robert Mays:

Glad to know someone appreciates my cooking ✊

Eli Apple on his maligned cooking: "I used to cook for my teammates any time they came over. It was good stuff! Nobody ever complained."

Eli Apple's culinary thoughts, continued: "I'm more of a breakfast guy, though. Come by in the morning, and I'll hook you up."

In the end, though, this accusation really isn’t of any importance, as former teammate Bradley Roby noted:

I can't cook either ! Maybe hot pockets at best lol .. And I'm a SUPERBOWL CHAMPION .

It’s not just the scout who deserves criticism, though, as we have more than enough proof that scouts and other team executives are going to say ridiculous things. (Consider that an Atlanta Falcons’ assistant coach asked Apple if he liked men.) A big part of the blame needs to go to the media who keep quoting scouts saying ridiculous things, and keep doing so anonymously. There are huge issues with quoting anonymous scouts on prospects under any circumstances (remember, it would be in the scouts’ best interest from a game theory perspective to criticize guys their team wants to pick up later), but it’s particularly problematic when the scouts are saying things that really don’t have any connection to players’ actual abilities.

Granting scouts the protection of anonymity and a forum to criticize players for anything they feel like blasting them for is highly dangerous; there are no repercussions for the scouts, and there can be real repercussions for the players. Quoting anonymous scouts on how players evaluate on the field has its own problems, but quoting them on players’ off-the-field makeup is even worse. The overall media should reduce its enabling of these scouts and their outrageous comments, either by not running anonymous scouts’ quotes at all or by not running the particularly bad ones. Journalists are not microphones: they are not compelled to transmit everything said to them, but should rather use discretion on what to run and what to not run. This isn’t just on the scouts; it’s on the media who seek out and repeat their crazy comments.