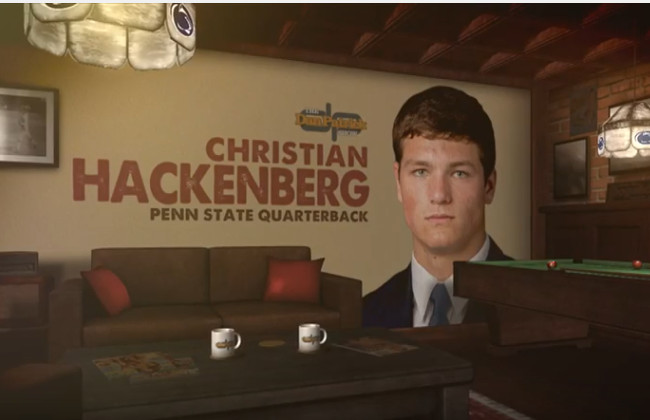 It would be easy to understand if Penn State quarterback Christian Hackenberg wasn’t thrilled with head coach James Franklin. Hackenberg shone in Bill O’Brien’s pro-style scheme during his freshman year, but seemed to struggle to adapt to Franklin’s spread offense and saw his numbers drop over his second and third seasons,  and Robert Klemko of The MMQB wrote in a larger piece on NFL teams’ pre-draft meetings with quarterbacks that anonymous NFL personnel guys (always problematic) told him Hackenberg blasted Franklin. However, Hackenberg has since denied that, and he did so again in even stronger terms on The Dan Patrick Show Wednesday:

What exactly did Klemko write about Hackenberg? Here’s the relevant part of his piece, from part of his concluding “Five things you need to know about the draft”:

2. Never blame the coach. Per two personnel sources on two separate teams who have shown interest in drafting Penn State’s Christian Hackenberg, the quarterback has said all the wrong things in interviews when asked to explain his declining sophomore and junior numbers (a combined 28 touchdowns and 21 interceptions). Hackenberg has shifted blame to coach James Franklin, who took over in 2014 when coach Bill O’Brien departed for the Texans. Said one evaluator: “Despite the fact that it’s probably true, you don’t want to hear a kid say that.”

What’s interesting, though, is that other personnel sources later talked to The MMQB’s Jenny Vrentas and told a different story:

Two weeks ago The MMQB’s Robert Klemko reported that two personnel sources told him Hackenberg had shifted blame to Franklin when their teams asked about his declining production his sophomore and junior seasons. But four high-ranking club officials who were part of their team’s interview process with prospects, speaking for this piece, said that was not how Hackenberg responded in their meetings.

“His answer was that he didn’t play as well, and there were things he needed to get better at,” one head coach said. One senior executive said he was impressed that Hackenberg didn’t throw Franklin under the bus, despite questions that set him up to do so. Another team decision-maker said he could read between the lines that Hackenberg and Franklin weren’t especially close but that Hackenberg did not blame his coach. During Hackenberg’s 12 formal interviews at the combine, some teams pushed that button harder than others, and some may have interpreted his answers differently. Hackenberg doesn’t believe he left any room for interpretation.

“It was a very easy answer for me. There are some things that I have to get better at, and that’s the way I approached it going into the interviews,” Hackenberg says. “It’s the greatest team game on the planet, but you have to be able to uphold your end of the bargain. I did that at times, and at times I didn’t. That’s the messaging I wanted to get across, is here’s where I could have gotten better. I own everything I put on tape. I did it. It wasn’t anyone pulling the trigger but No. 14.”

Similarly, when Patrick asked Hackenberg if Klemko’s report of him blaming Franklin “was a fair assessment of what was said by you,” Hackenberg denied it completely.

“Not at all,” he said. “I basically went into every interview and said the overruling theme was that it was just different,” Hackenberg said. “I was very focused on making sure that they knew that I was focused and ready to take this step to the next level. When I was in the interviews, I just said it was different, explained the differences and continued to just be very focused on the future. And doing what I know I need to be the best professional quarterback that I can be.”

He goes on to respond to a question about him “being slandered” in even stronger terms, saying “At the end of the day, I’ve never done it. I’ve never pointed a finger. I owned everything I put on tape, and I made sure the coaches knew that in interviews. I know exactly what I need to do to get better. Coach Franklin wasn’t the one pulling the trigger, I was. So I think that would just be an asinine statement for me to go in there and say that. I know what I need to do, I know what I said, and if someone interpreted it in that way, that would be shocking to me.”

Given both Hackenberg’s comments and the four personnel sources who agreed with them for Vrentas’ story, that does raise some questions about the allegations in Klemko’s piece. However, that doesn’t necessarily mean that Klemko’s piece is inaccurate, either; keep in mind that he’s reporting what personnel sources told him (and quite possibly different personnel sources than the ones Vrentas talked to; Hackenberg reportedly met with 12 teams), and it’s quite possible that what Hackenberg saw as saying “it was just different” is what teams saw as “saying all the wrong things” and “shifting blame to Franklin.” Both sides of any conversation often have a different recollection of it, and that’s especially true when it comes to impressions rather than specific words. It’s clear Hackenberg wasn’t thrilled with Franklin’s system; whether that translates into “throwing him under the bus” or not may be a matter of interpretation. Of course, though, it’s quite possible that Hackenberg is completely right and that those who talked to Klemko either misrepresented or misremembered what he said, and that’s a much more problematic situation.

This does show one of the challenges of draft reporting, especially when it comes to anonymous team sources. Their impressions may well be newsworthy, especially on a subject like this, but those impressions can also have an effect on the perception of a player (and that can create a conflict of interest; from a game-theory perspective, a source whose team likes a player should criticize him publicly to hurt his stock and potentially pick him up later in the draft). Without those sources being named and accountable, it can be very hard for a player like Hackenberg to change that perception, and media should be extremely wary of how much water they carry for anonymous scouts and if they’re questioning what scouts tell them enough. We don’t know if the comments about Hackenberg shifting blame to Franklin were fair or not, but we do know that they’re out there and that they’re creating problems for him. Of course, Hackenberg is getting plenty of media opportunities to tell his side of the story, so it’s not like his case is being thoroughly overlooked, but the anonymous scouts’ comments to Klemko have colored the perception of him. If Hackenberg’s denials of that are true, that isn’t particularly fair.