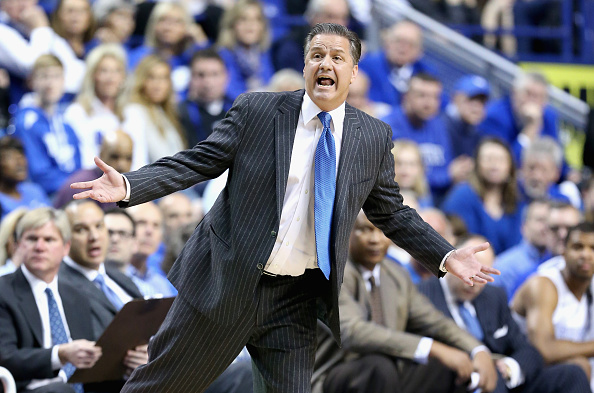 Harsh scouting evaluations of particular players aren’t anything new, but the last few years have seen more and more of them made public through the media, and have seen players and coaches fighting back as a result. The latest case comes from a NBA scout who anonymously commented on several of Kentucky’s basketball players to Sportsnet New York’s Adam Zagoria in the wake of the Wildcats’ 75-73 win over Louisville Saturday, praising point guard Tyler Ulis, offering mixed comments on shooting guard Jamal Murray and calling big man Skal Labissiere a “fraud,” “a ‘Paper Tiger,'” and “a mock draft myth.” Those criticisms prompted Kentucky head coach John Calipari to fire back on Twitter Sunday:

I've said it before and I'll say it again: Every one of my players is on their own timetable.

Kids grow at their own pace & shouldn't be judged by anyone else's timetable. We're here to serve these kids & help them reach their dreams.

Ultimately they've got to do it, but if anyone wants to attack one of my kids personally, they won't be welcomed here.

Evaluating guys is one thing, personal attacks are another. These are young kids and they deserve better.

While criticism and evaluation of college prospects is part of a scout’s job, it’s not hard to see why Calipari took exception to what he saw as unnecessary personal attacks on one of his players. This shows some of the perils of media members publishing and promoting scouts’ takes, especially when anonymity is provided. Anonymity allows scouts to be as critical and as personal as they want, and to potentially impact players’ professional futures with no repercussions to themselves.

Moreover, while charged language like “fraud” and “mock draft myth” may have a place in scouting reports and discussions within an organization, it’s harder to see why it’s valuable to broadcast that to the general public through the media. In reality, these comments aren’t that different from some of the nastiest stuff from Twitter trolls, but they’re being broadcast to a much wider audience thanks to the media’s willingness to relay anonymous scouting reports.

Perhaps even more importantly, there’s no particular gain and a potential loss for scouts in being truthful in publicly-published comments. If this guy and his team really do like Ulis, why would they want to promote that? It makes it more likely that other teams will start focusing on him and perhaps grab him before they can. There’s also a potential gain for them in being duplicitous; what if this scout really does like Labissiere? Criticisms like this could be a way to knock his stock down and let the scout’s team pick him up with a later pick. That’s not saying that these proffered opinions are necessarily anything but what the scout really believes, but it’s always important to consider how a source could potentially benefit from certain comments, especially when anonymity is extended. Maybe this scout is being entirely truthful, but the incentives aren’t for him to be honest.

There’s nothing wrong with evaluating college athletes’ potential as professionals, but perhaps it’s time for a wider discussion of the best ways to do so. For one thing, intensely-personal criticisms that don’t seem to have much to do with athletic performance don’t seem to have much of a place in a real scouting evaluation, especially one broadcast to the public. That’s true even if it’s coming from a named analyst (see Nolan Nawrocki v. everyone, but especially v. Cam Newton), but it’s particularly true when it’s from an anonymous one. Charged language and personal attacks may get attention, but it’s debatable if they have a place even in a closed draft room, much less in comments broadcast to the public. If this guy had only criticized Labissiere’s shooting ability and post presence, that’s much more fair; it’s the more personal comments that (justifiably) drew Calipari’s ire.

Beyond that, it’s worth asking whether it’s worth it for media members to broadcast anonymous comments from scouts and executives in general. The seeming rationale would be that these scouts are evaluation experts, but the issue is that, as mentioned above, they have considerable potential agendas and biases and zero accountability. That doesn’t mean they’ll only make comments that are in their organization’s favor (we’ve seen plenty of anonymous leakers hurt their own cause), but without their names being used, readers have no real way to evaluate their opinions. It would probably be more valuable to have someone like Zagoria relay his own opinions of prospects rather than an anonymous scout’s; at least he’s accountable, and at least we know where his opinion is coming from. Many media members seem to be quite willing to broadcast anonymous scouts’ hot takes, as they attract readers’ attention. The question is if there’s any real value to them, though.