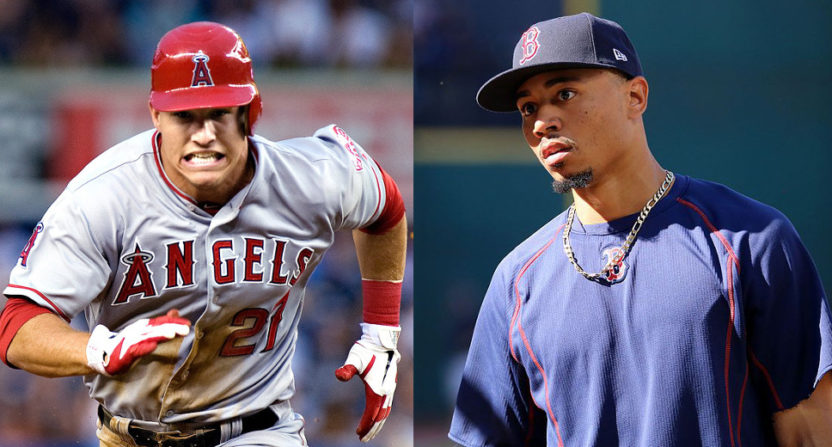 There’s a long history of local media members trying to pretend the local team’s star is as good as a league-wide star, but Nick Cafardo of The Boston Globe delivered a particularly ridiculous example of that in a piece published Tuesday. Cafardo not only tried to establish an equivalence between Red Sox right fielder Mookie Betts and Angels center fielder Mike Trout (ahead of the start of the Red Sox-Angels series), he argued that Betts was robbed of the AL MVP in favor of Trout in 2016 because Trout’s team wasn’t good.

If the piece stopped there, though, it would be a hot take but not necessarily a standout one. But Cafardo decided to try and prove his “Trout and Betts are comparable!” point by asking 10 “evaluators” (scouts and GMs) which of the two players they’d want right now, and the responses he got were hilarious, and yet another reason not to trust pieces quoting anonymous scouts. Especially the one who just falsely stated the players’ OPS to bolster Betts, had the Globe print that, and still picked Trout:

“I’d go with Trout,” said a National League evaluator. “Close though. Betts is a year younger and has a better OPS over the last two years.”

So for that evaluator (who favored Trout, even!) to not take five seconds to Google and check his thoughts on the players’ relative OPS, and then for Cafardo to just print that without checking himself (and he’s writing an article comparing the two players! You think he’d have looked at their stats at some point!) is just amazing.

While that’s the most egregiously false information in the article, the rest of it is pretty hilarious too. Consider some of these other comments from evaluators:

“Wow, I’m going with Betts!” said one American League scout. “More versatile. The power numbers go to Trout, but I like Betts all around.”

As previously mentioned, the on-base numbers also go to Trout. And as for stolen bases, Trout posted 30 in 2016 and 22 last year, while Betts went 26 and 26, so they’re about equal there. Betts is probably a better fielder, as per UZR, which is about the only thing that makes him maybe “more versatile,” but he plays a less valuable outfield position. So it’s good to know that there’s an AL scout who thinks not only that these two players are comparable, but that Betts is the better one. Bet that team’s doing real well with that kind of evaluation prowess.

“Haven’t seen Trout play in person since 2011, but with that in mind, I’ll go with Betts,” said an American League scout.

There are a whole lot of reasons to be curious about that comment. Is this guy new to the AL, or assigned to a different division, or only recently in a scouting role? But also, it’s amazing that seeing the player in person is so important, and that he wants to advertise his ignorance.

As stated above, analytics do not favor Mookie.

“Trout’s ahead of him, no doubt,” said one American League executive, “but Mookie has the ability to catch up if he has a couple of really consistent years, which he appears to be on his way to doing.”

Betts finished runner-up to Trout for the 2016 American League MVP. I think Betts got robbed. As a voter, I place great value on a player who helps lead his team to a first-place finish. Betts did that in 2016. Trout’s Angels were awful, and it’s tough to gauge the value of a player under those circumstances. Where the stats lean in favor of Trout, that’s where the majority of the votes went.

Which brings us to a topic that will never die: Should the MVP award be based on the best player, or his value to the team? It seems they’ve become one and the same. But that shouldn’t be.

The “value to his team” argument is hilariously dumb and outdated, and is regularly used to argue for players who weren’t actually as good, but played for better teams. (And , shockingly, it’s regularly used by local media figures to argue for the guy who plays in their market.) But the best part of this is that Cafardo’s essentially admitting Trout was the better player that year (even if not “most valuable” by his standard), which is by far Betts’ best year, and which essentially nullifies the whole point of this article-length comparison before we even get to the evaluators being dumb.

But hey, maybe there is some value to this article after all. It illustrates how far some local media members will go to try and pump up the guy who plays in their market. It’s yet another example of how seriously we should take a lot of the “anonymous scout” quotes, considering that one of these scouts couldn’t even bother to look up the players’ OPS when he was referencing them. It shows how much effort (read: none) is put into fact-checking those scouts’ quotes. And it shows that there are always going to be people who try to make ridiculous comparisons and ignore the actual facts, and that some of them work for teams. That’s well worth keeping in mind the next time you read a quote from an anonymous evaluator.