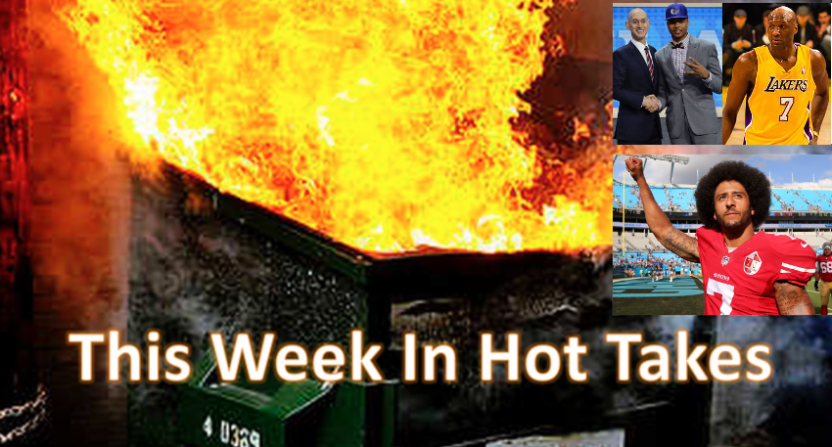 Welcome to another edition of This Week In Hot Takes. This time around, we’re looking at the hottest takes from sports media members from June 16-22.

5. Skip Bayless says Rickie Fowler is “not a closer”: Yes, with the U.S. Open on Fox and FS1, we got Bayless dropping some hot golf takes:

Rickie Fowler's coach Butch Harmon recently asked him if he wants to be a Instagramming Kardashian or a champion. I still wonder.

Despite his extreme popularity, I wonder if Rickie Fowler is made of tough enough stuff to win a major. Might on pure talent. But I wonder.

Rickie: top 5 in 4 majors in '14 but never in contention down stretch. Today he shot +1 on back. Not a closer. Brand bigger than guts.

Yes, it takes a Bayless to start bringing “guts” and “closer” into golf. This went about as well as Undisputed‘s reveal of tee times. But at least Bayless didn’t misidentify Brooks Koepka’s girlfriend.

4. Michael DeCourcy and Malcolm Gladwell think the NBA draft doesn’t matter: We have a two-for-one here, as it’s basically the same take from both. First, DeCourcy who previously appeared in these pages for his suggestion that Ben Simmons should be happy with not being paid for playing in college.. He’s back this week thanks to a take that the NBA draft doesn’t matter. Here are the lowlights:

Is there any area of our daily existence in which more effort is expended to chronicle something that turns out to mean so little?

Other than “The Bachelorette,” of course.

Remember the days when winning the rights to the overall No. 1 pick meant you were more likely than not to get the shot at drafting a Patrick Ewing, Shaquille O’Neal or Chris Webber? Yeah, now you get Anthony Bennett.

That’s a joke, an exaggeration and an oversimplification — sort of — but no one seems to want to acknowledge that the more we talk about the NBA Draft, the less of an impact the players we’re talking about are having on the league.

DeCourcy goes on to say that the draft doesn’t matter because teams with multiple top-ten picks in the last decade haven’t won much, and that there have been as many all-NBA players drafted outside the top ten as in it since 2010. He’s not wrong that some teams have done well with picks late in the first round, but that hardly means the draft “means so little.” And he goes on to drop a hot take on top pick Markelle Fultz’s team’s record in college (something we’ll see again later in this column):

You’ve been told almost since the start of the most recent college basketball season that Washington point guard Markelle Fultz is the obvious No. 1 pick. The 76ers thought enough of him to trade away a future first-round pick to ensure they could select him. Fultz will be expected to be a crucial asset in turning the Sixers from a team that averaged fewer than 20 wins over the past four seasons.

Fultz’s college team lost 71 percent of its games. That maybe wasn’t his fault, as Scout.com analyst Brian Snow likes to say, but it was his problem. Attempting to justify the avalanche of pre-draft hype over the past eight months is his problem now.

As per Gladwell, he went on Bill Simmons’ podcast and said the following:

If you want to actually read a thoughtful analysis of why the NBA draft matters, and why it works out over time even with high-profile busts, read former 76ers VP Ben Falk’s rebuttal of Gladwell at Cleaning The Glass. Don’t read DeCourcy, or listen to Gladwell.

3. Stephen A. Smith screams about Lamar Odom’s crack usage: This rant on First Take Thursday was the most delightfully unhinged commentary from overall Hot Takes leader Stephen A. (and the best justification of his “Screamin’ A” moniker) in some time, which is saying something:

“Lamar Odom, WHO WAS ON CRACK!” That’s going to be a Stephen A. soundbite for all time. It’s awfully nice of him to do this on the anniversary of his heckling, too.

2. Bob Brookover criticizes Markelle Fultz’s team’s record, admits he hasn’t seen him play: We do appreciate honesty in hot takes, and Philadelphia Inquirer columnist Bob Brookover delivered that in spades this week. Brookover wrote a “Fultz’s team didn’t win enough to justify picking him” column, titled “Risk and price too high for Markelle Fultz,” and it probably would have made this column on its own merits. But what really made it stand out? Brookover admitted at the start he’d never seen Fultz play, and didn’t even attend his workout for the 76ers:

I confess that I have never seen Markelle Fultz play a basketball game and I was not at his 76ers workout Saturday in Camden. Still, it is hard to stamp a seal of approval on what the franchise is about to do.

…What scares me about Fultz is his one-and-done team resumé at Washington. The Huskies went 9-22 overall, 2-16 in the conference, and finished the year on a 13-game losing streak. I can’t imagine a team with LeBron James or Curry or Harden or Westbrook being that bad regardless of the supporting cast around them.

As Adam Zagoria noted on Twitter, too, this conveniently ignores when Fultz did win:

Maybe someone should tell him Markelle Fultz was the MVP of the @usabasketball U18 gold medal team last summer pic.twitter.com/lRuQ2LFATv

That’s a pretty strong hot take cannon you’ve got there, Bob. Nice of you to be so definitive about a player you’ve literally never watched. And hey, you made Fultz himself laugh out loud, so good for you.

1. Albert Breer thinks Colin Kaepernick is keeping himself out of football, cites anonymous sources about him not working hard: Breer has appeared in this column before for his takes on how Boston isn’t racist and how Adam Jones needed to prove racial slurs were hurled at him, and he’s back thanks to a MMQB column on Colin Kaepernick. Here are the lowlights:

And yet, this question from those who were there lingers: Does he still want to play?

So in the immediate wake of the most controversial thing he’s done since he started kneeling for the anthem, I’m ready to align with others who’ve said it: It’s time for Kaepernick to talk for himself. Doesn’t matter how he does it. It can be through the legion of reporters friendly to his efforts. It can be through a video released on social media. It can be through a Facebook page or a press conference.

Whatever. It’s just time for Kaepernick to talk.

The problem is in the vacuum that his silence has created. It’s been filled with speculation and tea-leaf reading. Meanwhile, teams unsure if Kaepernick was truly interested in continuing his NFL career (rather than focusing solely on his causes) are still wondering. And that’s so long as they haven’t been convinced by his most recent actions that he’s out.

…As one Niners employee explained it, Kaepernick wouldn’t stay late at the facility during the season like many quarterbacks routinely do, saying he’d take work home. And there were examples where coaches saw what looked like shoddy prep surfacing in inexplicable mental errors in games. Another staffer, asked if he thinks Kaepernick wants to keep playing, answered, “I do think he wants to play—to stay relevant.”

This has been nicely deconstructed by Tom Ley at Deadspin and Robert Littal at Black Sports Online. Here’s Ley’s conclusion:

So, the league-wide refusal to sign Kaepernick is at least partially due to his political beliefs, but that’s not a form of blackballing, but also, he’s probably not good enough to get a job anyway, but also also, if he would just come out and promise to focus on football and not political causes from now on teams around the league might stop … doing whatever it is that is not blackballing that they are doing to him.

Breer’s column has led us to a truly stunning revelation: Colin Kaepernick is in fact blackballing himself.

And the key part of Littal’s piece:

This is all speculation from one employee. It could have been the guy who washes the jock straps for all we know because it is anonymous. How does anyone know if Kaepernick actually did do the work at home? What are the specific mental errors they are talking about? If Kaepernick was such a poor leader and lazy individual why did his teammates vote him to receive their most prestigious team award? No coach or player has ever questioned Kaepernick’s work ethic, but we are supposed to believe one random staffer?