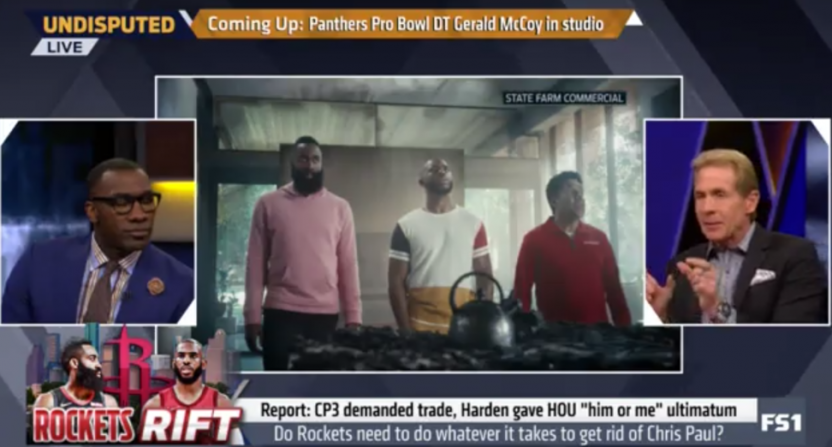 There have been plenty of cases of people and organizations who should really know better spreading misinformation tweeted by fake reporter accounts, but a particularly egregious one came from Fox’s Skip Bayless on Undisputed Wednesday. The “@SportsTalkBarry” Twitter account has been around for a while making fun of sports media, and between the name “Barry McCockiner” and the bio of “Host of @classactpod. Backup: @TroopLoverBarry. Marijuana is deadly. I have as many Finals MVP’s as Steph Curry. Tom Brady is an overrated system QB. Parody,” it’s pretty obvious anything there shouldn’t be taken seriously.

But apparently Bayless didn’t get that memo, as in an Undisputed debate about Chris Paul and James Harden’s reported tensions in Houston, he credulously discussed “reports” (without even citing his source) of Paul mocking Harden’s appearance. The only “report” there seems to be a SportsTalkBarry tweet, one that came where he pulled the age-old move of changing his display name to “Adrian Wojnarowski” and one that got a bunch of verified accounts to comment on it:

And here’s how Bayless discussed that Wednesday:

“The reports are that this has been going on for two years. There was the one report yesterday that this got so bad in practice going back two years ago that Chris Paul was making fun of James’ manboobs in practice to the point where he broke down in tears and had to leave a couple of practices. That’s when you’re hitting bottom.”

Nah, the only one hitting bottom here is Bayless, if he didn’t already reach that with his insane meltdown over Kawhi Leonard winning Finals MVP. And this is worth remembering the next time Bayless does a puffy interview where he says the same things to the likes of Complex, Recode, The Washington Post, THR or whoever else, most of which go on and on about how Bayless sincerely believes all his ridiculous positions, how hard he works out, and how he’s “prepping his brains out” for each day’s debate. Well, the Bayless version of “prepping his brains out” this time involved falling for an obviously fake report, one that should have triggered alarm bells for its substance and then yet more alarms for its source. But Bayless instead decided to just relay that as a real report on air. Embrace stupidity.