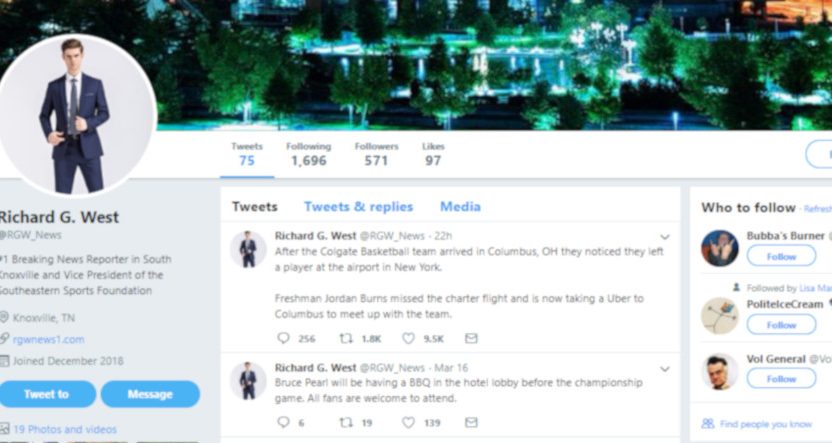 There are plenty of cases of media members being fooled by fake social media accounts, but those accounts usually are impersonating a legitimate reporter, like Adrian Wojnarowski or Adam Schefter. There have been some more ambitious plans at times, though, including fake athlete quotes, fake college recruits, fake websites, and even accounts posing as reporters. The latest case along the latter lines involved fake reporter “Richard G. West” tweeting that Colgate player Jordan Burns missed the team’s flight and took an Uber from New York to Columbus for their game, and it fooled a lot of people on Twitter, some sites in CBS’ network of local news sites, and even Burns’ own mother.

This is from an account that’s been active since December, that’s been tweeting fake stories since then, that’s gotten attention for some of them (especially a rumor about West Virginia basketball taking the wrong plane), and that has apparently faced no consequences from Twitter. And we’ll get to that in a bit. But first, here’s more on the Burns case from Mike Wilson of The Knoxville News-Sentinel (the Knoxville connection is relevant because Colgate’s game is against Tennessee Friday, and because “West” lists in his Twitter bio that he’s the “#1 Breaking News Reporter in South Knoxville and Vice President of the Southeastern Sports Foundation”):

Colgate guard Jordan Burns was in Ohio on Wednesday just as he was supposed to be.

Then his mom called.

“She was like, ‘Wow, I know if you would have missed this flight I know you would have picked up the phone and called me, right?’ ” Burns said Thursday. “I was, like, ‘Yeah, Mom, I’m in the hotel and things like that.’ “

Burns soon found out the reasoning. A fake tweet circulated rapidly on Twitter late Wednesday saying the Raiders guard missed the team flight and had to take an Uber to Columbus to join his team.

In reality, there was no funny business for Burns or the Raiders’ travel from Hamilton, N.Y., to Ohio.

“I had a lot of little messages like, ‘Did you not make it?’ Like, ‘Wow, they left you? Really? Like, that’s crazy. After everything you’ve done,’ ” Burns said. “People are telling me all this stuff. It’s funny. But it’s just a fake tweet. It’s really hysterical.”

Here’s the fake tweet in question, sent at 8:26 p.m. Eastern Wednesday and still up as of 6:30 p.m. Eastern Thursday:

After the Colgate Basketball team arrived in Columbus, OH they noticed they left a player at the airport in New York.

Freshman Jordan Burns missed the charter flight and is now taking a Uber to Columbus to meet up with the team.

As of 6:30 p.m. Eastern Thursday, that tweet had 9,522 likes, 1,840 retweets, and 256 replies. And it was picked up by at least CBS New York, CBS Philadelphia, and CBS Pittsburgh, as per a Google News search. Those stories have since been deleted, and cached versions aren’t showing up either, but in a thoroughly appropriate twist, they live on thanks to other dubious sites scraping them. Here’s the CBS NY story at the “Boston Informer.”

(CBS New York/CBS Local) — Colgate sophomore guard Jordan Burns made it to the the airport for the team’s charter flight to its first-round NCAA Tournament game. But he didn’t make it onto the plane. And the team didn’t notice until they landed.

So now the sophomore guard is taking an Uber from Hamilton, New York to Columbus, Ohio, where his 15th-seeded Raiders will take on the second-seeded Tennessee Volunteers. The 512-mile trip, under normal driving conditions, should take about eight hours. The game is scheduled for Friday, March 22 at 2:45 ET.

Burns is a key part of a Colgate team hoping for an upset and a little more March madness. He’s averaging 15.8 points and 5.8 assists per game this season. Colgate won the Patriot League tournament, securing their place in the South Region of…

Why did this tweet get so much attention? Well, whoever runs the “West” account built up a reasonable-at-first-glance background; their account started in December, their bio (“#1 Breaking News Reporter in South Knoxville and Vice President of the Southeastern Sports Foundation”) feels like something an actual reporter there would use, and they’ve managed to build up 568 followers (likely thanks to following 1,696 people; many people see someone following them whose bio doesn’t look ridiculous and just hit follow without actually checking out their tweets). And the tweet in question here strikes the right balance of interesting but believable; athletes have missed flights and driven to cities before, Columbus is not an unreasonable drive away from Hamilton (especially with the game not until Friday), and there have been some ridiculously expensive Uber trips. If Burns had missed a flight, it would have seemed more logical for Colgate to send him with someone else rather than an Uber, but NCAA schools aren’t always smart with money. So at first glance, this doesn’t necessarily scream obviously fake.

But where this really falls down, and where media should have caught it, is at an obvious hurdle. “West” lists his website as rgwnews1.com in his bio, and that’s a reasonable address. But no site exists at that location. That’s a problem. Also, a cursory look through tweets from this account finds a bunch of obviously false ones:

The NCAA will be informing LSU of their future sanctions in the next coming days.

One of the mandates will be for LSU to get rid of their mascot Mike the Tiger and start using Will the Cheetah. pic.twitter.com/FrBgSvNxsz

The FBI wiretaps on Will Wade has also confirmed that he has been paying referee Anthony Jordan.

Anthony Jordan has been at the center of several controversial calls at the end of close games this season that went in LSU’s favor.

The FBI opens up immediate investigation into the AP Top 25 poll voters in suspicion of bribery from Duke Athletics.

Breaking News: After being turned down by Eddie Gran, Kirby Smart will now head to the Miami Dolphins as the Head Coach.

West Virginia basketball team will be late getting to Knoxville tonight due to they got on the wrong airplane and ended up Phoenix, AZ.

Most of those went pretty unnoticed, but the West Virginia one got some traction on message boards and some rebuttals. And yet, there was no punishment for Twitter for the West account. And in an era when there are plenty of stories about Twitter, Facebook and other social media services’ struggles with stopping fake news and fake accounts, the lack of action on this tweet might be another case of inaction for critics of those services to point to. But hey, they’ll be ready and willing to ban anyone posting unauthorized highlights…