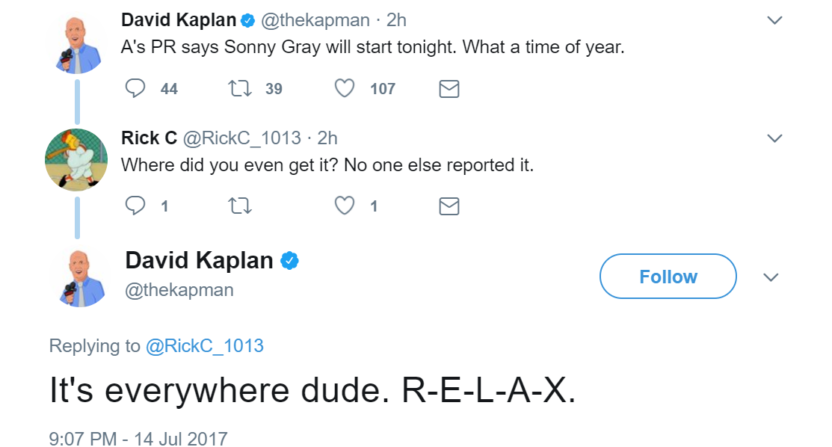 Fake Twitter rumors are a scourge upon us all, though actual news disseminators are perhaps the most affected. These are women and men conditioned to get breaking news out as quickly as possible, and it’s led to predictable incidents of otherwise trustworthy sources sending out completely inaccurate information.

Tonight, we find CSN Chicago and ESPN 1000 host David Kaplan falling prey to just such a rumor, involving Oakland A’s ace Sonny Gray being scratched before his scheduled Friday night start against the Cleveland Indians. Had he actually been scratched, that would have obviously been a signal that a trade was imminent.

So Sonny Gray has just been scratched from tonight's start against the Cleveland Indians. Hmmm.

Now, what hurts even more is that Kaplan didn’t even bother sourcing what ended up being a fake rumor, but nevertheless. It appears Kaplan may have seen one of these tweets, although it’s impossible to say for sure:

That third account is not the A’s account, as you probably realized, because you’re not Dave Kaplan. But hey, this isn’t that big of a deal. You get something wrong, you laugh it off and own the mistake, even when Twitter inevitably goes overboard with the mockery. The A’s even addressed the rumor:

A's PR announces that any report of Sonny Gray being scratched from tonight's start is not true.

And that, frankly, should have been that. Except Kaplan couldn’t just take the L. Instead, he played some aggressive defense, despite standing to gain absolutely nothing. His tactic was that it was a widespread report/rumor, except, well, it wasn’t. That led to exchanges like this:

No it's not lol

It wasn't only me.

And then, of course, there’s his overall correction tweet, which should read “Hey, I wasn’t careful enough and accidentally spread a fake rumor, my bad” (or something like that; again, it’s not that big a deal if you just admit it), and instead reads like this:

A's PR says Sonny Gray will start tonight. What a time of year.

Reporters (or perhaps more accurately anymore, newsbreakers) aren’t going to lose credibility if they admit they simply misread a Twitter handle. That’s easy to do. But taken at face value, this line of defense kind of makes it seem like Kaplan has no real idea what’s real and what’s fake.

That’s not a great look, Dave! Perhaps he was rushing to beat the kind of Reddit reports that technically broke the Jose Quintana trade news in Kaplan’s city?

Kap got that report from drycrack34