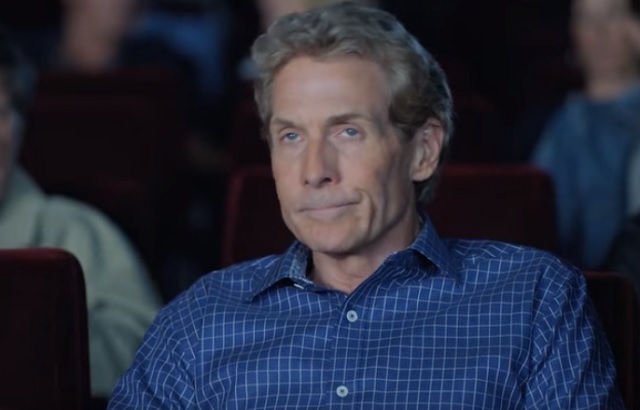 The biggest takeaway from Adam Caparell’s detailed Complex profile of FS1’s Skip Bayless isn’t that Bayless insists his debate positions aren’t contrived, or that his goal is to make viewers have an opinion, or that he has crazy takes on pasta, loves to work out, or has a place with a gorgeous sunset view he doesn’t watch because “It’s always going to be there.” Those are all notable moments, but what really stands out is how Bayless insists his takes aren’t just genuine, but consistently accurate. Here’s the key part of Caparell’s piece:

[I]f you think he’s just stirring things up for the hell of it, while collecting a princely sum of money (reportedly $5.5 million a year), he’d like you to know that he’s just a man of convictions—strong ones—who calls it like he sees it. “You never contrive the debate,” he insists.

Which is something many accuse him of doing, considering how passionate and oftentimes outrageous his opinions can be. Whether it’s his incessant criticism of LeBron James, or his deeply held beliefs in the abilities of Tim Tebow as an NFL quarterback, the Skip Bayless on TV five days a week, who first gained notoriety at ESPN before taking his talents to Fox Sports last year, says it’s always genuine. “I just speak from my heart; I just get to truth telling,” says Bayless. “And I have consistently been correct on all these outrageous takes.”

What Bayless calls “truth telling” others might call “trolling.” But sitting in his chair on the set of his show Undisputed, the 65-year-old believes everything he’s about to say and is supremely confident he has “never lost a debate.” The man who called LeBron’s chasedown block in the 2016 NBA Finals “overrated” and Dak Prescott a can’t-miss QB after watching three preseason games swears he isn’t slinging a bunch of bullshit.

“Consistently been correct,” eh, Skip? Here are a few of the times he has very much been incorrect, via Rick Chandler of SportsGrid:

Derek Fisher will prove to be a much better NBA head coach than Steve Kerr.

I KNOW what Tebow can do in the NFL. I've seen it over/over/over. I'm not sure what Andrew Luck can do or if he has Tebow's It Factor

We all saw what Tim Tebow did in the NFL, and it wasn’t much.

Johnny Football will one day be bigger in Cleveland than his buddy LeBron ever was.

A bigger embarrassment to the city, perhaps.

The University of Oklahoma will win the NCAA football championship and Landry Jones will win the Heisman. Book it.

This did not happen: Oklahoma went 10-3, and Landry Jones wasn’t in the Heisman top 10.

What about from our own This Week In Hot Takes, where Bayless said “Bama is lucky they didn’t have to play Vanderbilt this year”? 6-6 Vanderbilt went on to lose the Music City Bowl 41-17 to North Carolina State, while Alabama rolled over Washington 24-7 in the College Football Playoff semifinals and will face Clemson for the national championship.

Next, here’s one of the greatest ones, from Bleacher Report’s Amber Lee:

Remember when you said Tebow was the next Brett Favre? Yeah, not so much. But hey, at least your pick for his baseball career could still work out:

Tebow has big-leaguel left-handed power. Can he hit big-league pitching? Hardest thing to do in sports. Wouldn't bet against him.

Interesting that Gary Sheffield says he has watched Tebow hit in the batting cage and believes he has IT – big-league potential.

Tebow hit .194 in the Arizona Fall League this year. But hey, the Mets want him in spring training camp, so you never know, Skip. It’s one of these very few outrageous takes you still have the chance of being correct on.