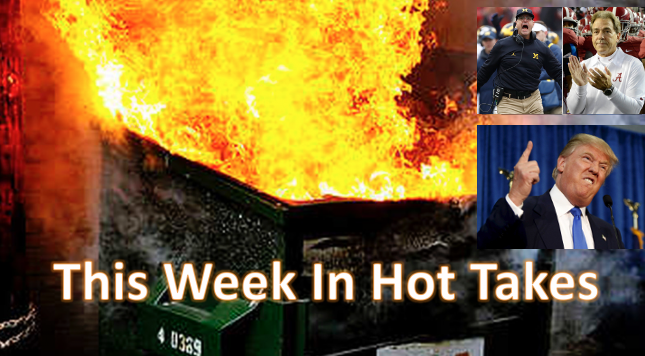 Welcome back to This Week In Hot Takes. We apologize for the tryptophan-induced absence last week; all the hot takes were instead fed into reheating Thanksgiving leftovers. Here’s a look at the hottest sports media takes from Nov. 25 to Dec. 1.

5. Charles Barkley doesn’t like Warriors’ “girly basketball”: Barkley has long been known for his bashing of the Golden State Warriors and the modern NBA, and he went back to that well on TNT’s Inside The NBA Thursday night with a rant about how the Warriors play:

Charles Barkley explains why he doesn't like the way the Golden State Warriors play basketball pic.twitter.com/DaTud8Lwje

A transcription of the key part, via Dane Carbaugh of Pro Basketball Talk:

“Maybe I’m old school, but I’m never gonna like that little girly basketball where you have to outscore people. I’m biased against girl basketball. I love Geno Auriemma, one of my favorite coaches, I love women’s basketball, but I don’t want it in the NBA.”

Pretty much any version of basketball involves trying to outscore the other team; that has nothing to do with gender. Trying to use gender as an insult is wrong in any context, but it’s also hilariously misapplied here. If Barkley’s trying to say there’s no defense in women’s basketball, he probably isn’t watching very much of it. He also isn’t watching much of the Warriors, or at least analyzing what they do and don’t do; Carbaugh notes that the Warriors’ three years under Steve Kerr have each resulted in better team defensive ratings than Barkley’s teams achieved in all but two of the 16 years he spent in the NBA.

4. Joe Browne chose a terrible time to make a restocking point: This one’s a bit unusual, as Browne (@JBeonTheHill, formerly @NFLOnTheHill) isn’t really a media figure; he worked for the NFL for 50 years as a high-ranking PR and governmental relations official, and retired earlier this year to start his own agency. However, he came up with a remarkably hot take, which came shortly after the tragic plane crash in Columbia Monday night that killed 71 of the 77 people on board, including Chapecoense players, coaches, crew and media. Here’s a screencap of the since-deleted tweet Browne sent Tuesday morning, only hours after the disaster, and the response from the New England Patriots’ Twitter account: 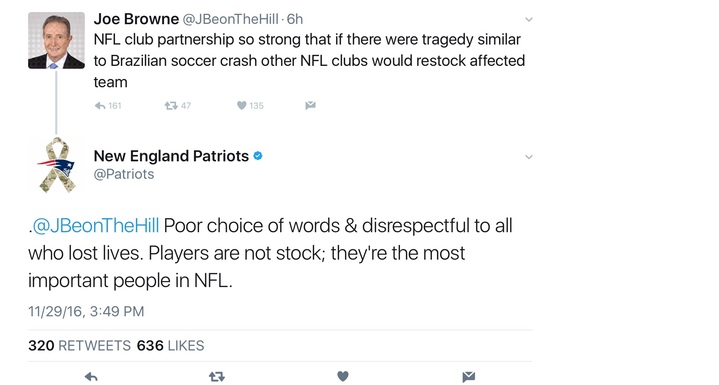 The base premise of Browne’s tweet isn’t wrong; yes, the NFL has a plan for a disaster like this, as do other professional sports leagues. The New York Daily News detailed contingency plans for MLB, NBA, NHL and the NFL the other day, and many of them (including the NFL) do involve dispersal drafts. Yes, there have even been cases where NFL teams combined rosters thanks to player shortages, such as the Steagles in 1943 and Card-Pitt in 1944. However, throwing this out there so soon after the crash and trying to present it as something that’s great about the NFL was very misguided.

“He had the birth of his kid in Atlanta,” Felger said on the television station. “The game was in Miami. I know when you make $30 million a year it ain’t much to get a private jet. (Celtics co-owner) Wyc (Grousbeck) would probably pick it up to fly down at 3 o’clock in Atlanta. It’s about a 90-minute flight to Atlanta. Play the game and come right back.”

Insisting an athlete isn’t entitled to a day off around their kid’s birth is something else, especially for a regular-season game and especially when you admit you took a day for your own child’s birth. Sadly, these kind of anti-paternity leave takes are all too common in the sports media world.

2. Skip Bayless says “Bama is lucky they didn’t have to play Vanderbilt this year”: Yes, Bayless’ relationship with the real world is often rocky, and yes, that’s particularly true when it comes to teams he’s connected to, like the Dallas Cowboys and Vanderbilt (which he attended on The Grantland Rice Scholarship, something that probably caused Rice to roll over in his grave). That was particularly shown in this Undisputed clip, where Bayless is confident 12-0 Alabama would struggle against 6-6 Vanderbilt:

"Bama is lucky they didn't have to play Vanderbilt this year." — @RealSkipBayless still thinks Alabama is overrated pic.twitter.com/j6HuuoCae2

Shannon Sharpe says “If Vanderbilt were to play Alabama, they would cut the program, they would cut Vanderbilt football.” Bayless responds”That is wrong, the Shurmur kid can wing it! Saint Nick, Ain’t Nick is what he is, he would give up 400 yards to my Vanderbilt quarterback.” Sharpe says “Skip, you would ask that they no longer call you and ask for alumni dues if Vanderbilt were to play Alabama, cause you know a thumping coming.” Bayless says “I don’t think it would be a thumping. He would be just the antidote for that defense.”

Has Bayless watched any of Vanderbilt or Alabama’s games this year? Or the 34-0 thumping Alabama put on Vanderbilt the last time the teams met in 2011, or the 61-18-4 all-time record the Tide hold against the Commodores? Granted, these are new players, but consider their common opponents this season: Alabama beat Kentucky 34-6, while Vanderbilt lost 20-13. Alabama beat Tennessee 49-10; Vanderbilt posted a 45-34 win, which was still impressive, but less decisive. Vanderbilt lost to Auburn 23-16, while Alabama beat the Tigers 30-12. The one that’s better for Vanderbilt is their 38-17 win over Ole Miss, a team the Tide narrowly edged 48-43, but the Commodores’ win came as the Rebels collapsed down the stretch. There’s very little to suggest that an Commodores-Tide match wouldn’t be a total massacre in favor of Alabama, so Bama is not “lucky” they didn’t have to play Vanderbilt. Amazingly, though, this wasn’t even the dumbest college football take on FS1 this week, as you’ll see below…

1. Jason Whitlock calls Jim Harbaugh “the Donald Trump of college football” and says he got “screwed by the establishment”:

This is a remarkable take on so many levels. Trump, the current president-elect of the United States, got “screwed by the establishment?” The conspiracy theories about the officiating (which even were largely refuted by a Michigan blog!) are insane enough, but it’s the comparison of Trump to Harbaugh that really elevates this one. Tune in to Speak For Yourself next week to hear which college football coach is like Hillary Clinton!