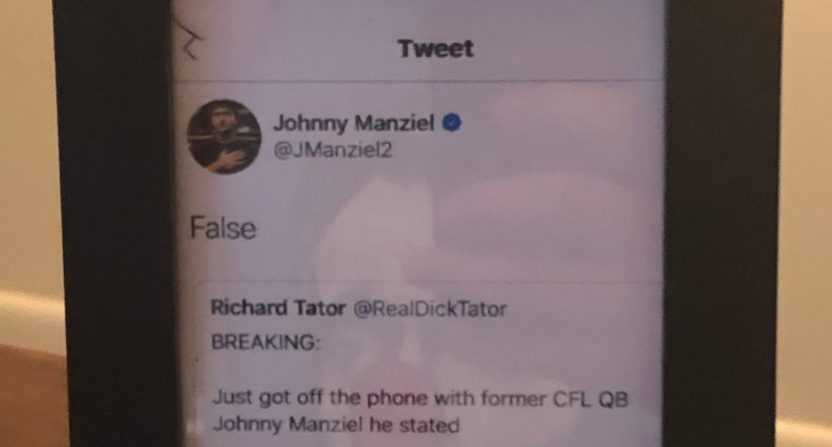 There are a whole lot of strange Twitter accounts out there looking to gain attention with apparent scoops, including those impersonating the likes of Adrian Wojnarowski, Adam Schefter, Ian Rapoport or Ken Rosenthal. And we’ve also seen people make up news with fake sites or fake Twitter accounts, with those reports then getting picked up by actual media. The saga of Johnny Manziel’s release by the Montreal Alouettes and ban from the Canadian Football League as a whole over unspecified violations of his agreement with the league saw an odd combination of those two things, though, with one of the people claiming to have quotes from Manziel on this being an account that goes by “Richard Tator” (@RealDickTator”), uses a stock photo as their avatar, and has their bio call them an “@ESPN Beat writer, covering anything sports related” (before getting to “parody account” much later, and only after notable CFL figures started retweeting him).

That account wound up showing up very high in the Twitter discussion of trending topic “Manziel,” with seemingly-plausible claims from Manziel and his agent. The only problem? Those claims get a lot less plausible if you consider them as from “@RealDickTator,” a made-up punny name for someone who doesn’t appear to actually have any affiliation with ESPN and also seems to have stolen their account photo. But that account still got a lot of attention Wednesday for its tweets about Manziel, his agent, the AAF and more, leading to Manziel himself saying that the claims from “Tator” were false:

Meanwhile, “Tator” reacted with further tweets, and then a framing of the Manziel tweet:

When asked about my latest reporting on his contract negotiation, Johnny Manziel stated the report was… https://t.co/g9l4QhpMxo

““Stand up for what you believe in, even if Johnny Manziel calls you a liar” – Collin Kaepernick” – Richard Tator pic.twitter.com/I0SSmauIZ0

It’s unclear what the goal is here for whoever’s running the “Tator” account; if it’s just to get attention, they’ve certainly accomplished that, and made a number of people who took them at face value look dumb in the process. (Or maybe that’s the goal, seeing just who in sports would believe that an ESPN reporter they’d never heard of named “Dick Tator” was a legitimate source.) And they even got a quote retweet from Manziel calling them out. But yeah, people should have been dubious of someone going by “Dick Tator,” of someone claiming to work for ESPN with nothing to support that (ESPN may employ a zillion people, but they tend to have actual presence on ESPN’s website), and of someone whose past tweets include ripping off the Onion, making fake claims about Jussie Smollett, and posting fake Robert Kraft t-shirts:

BREAKING: My sources were able to find the exact check that #JessieSmollett used to pay off the fake crime. Unbelievable! He wasn’t even trying to hide it pic.twitter.com/iR9EtX7nW8

Thinking of selling these shirts, might delete later #RobertKraft pic.twitter.com/5H37wLzJe3

Other old tweets from “Tator” include a bunch that just took legitimate sports reports from ESPN or other sources and claimed them as his own. But none of those got all that much attention; the Manziel one did, maybe because there’s so little actual information on it out there. At any rate, this account certainly did pick up some notoriety Wednesday. And that’s yet a further reminder to be careful who you retweet.