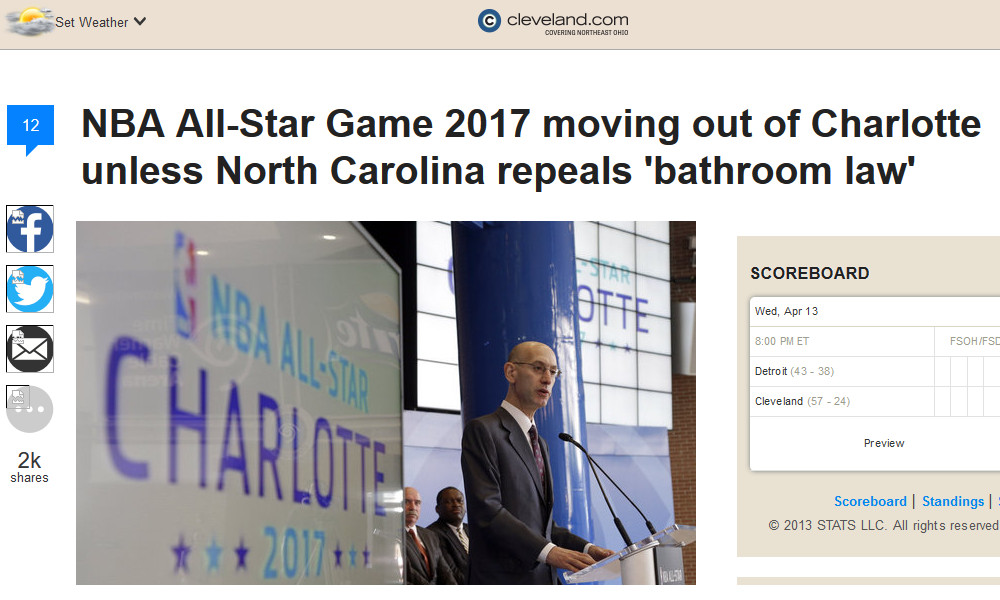 The Cleveland Plain Dealer and its cleveland.com website are facing significant criticism on a number of fronts. This Cleveland Scene piece from Vince Grzegorek highlights several of them, but the most important here are the site falling for a fake NBA story (and repeating it with partial AP attribution, causing that story to spread) and the paper’s decision to not send reporters to several road MLB games thus far. These are two separate issues, but neither makes the publication look good.

First, there’s the fake story, which ran last weekend (archived version here). Apparently, someone at Cleveland.com saw a story from ABC News imposter site abcnews.com.co that NBA commissioner Adam Silver gave North Carolina a 30-day deadline to overturn its controversial law permitting some forms of discrimination against the LGBT community or lose the right to host the 2017 all-star game in Charlotte. This was believable, as the NBA did issue a statement last month expressing concern and saying they did not know what impact it would have on their ability to host the game in Charlotte, and there have been calls to move the game from the likes of Charles Barkley, but the 30-day deadline from Silver was pure fabrication.

A Cleveland.com editor added that to an AP story on their site about the law, though, and that spawned plenty of other sites reporting on this fake threat, which even caused the NBA to issue a rebuttal on Twitter. Cleveland.com vice-president of content Chris Quinn issued an apology Monday; here’s the key part.

Over the weekend, someone created a site that carefully mimicked the ABC news website and included a fake story about the NBA threatening to pull next year’s All Star Game out of Charlotte in protest of North Carolina’s new law. At cleveland.com, we saw that story, believed it to be real and decided to post the news on our website.

That was our first mistake. This kind of news rarely is reported by a single national news organization. We should have found other sources, and, finding none, questioned how ABC would be alone in reporting this story. If we had done the basics, we would have figured out pretty quickly that we were seeing an impostor ABC website.

We have a pretty strict attribution policy at cleveland.com, so when we use facts reported by the Associated Press, we attribute those facts. When we get information from other sources, we attribute that as well.

We have apologized to the Associated Press, and we apologize to you. We owe you better than what we offered on this story.

Quinn’s apology is valuable, but he’s wrong that someone created the fake ABC News site over the weekend; it’s been around for a while, and even fooled Ann Coulter and Corey Lewandowski (Donald Trump’s campaign manager) last month. He’s right on how cleveland.com should have been much more careful here, though. This is a bad mistake, especially putting it under the AP byline, which enabled the story to spread and made that outlet look foolish for something that wasn’t their fault.

Not sending beat reporters to road games is a different kettle of fish, and it’s not even necessarily a mistake. It is drawing some further criticism, though, including this piece from Hardball Talk’s Craig Calcaterra. Calcaterra has written before that there may be some value to changing how baseball is covered, but he doesn’t find this particular approach to be a useful one:

Personally, I’d love to see experiments in how baseball is covered. You obviously can’t get quotes from afar, but are the quotes important? You can obviously see the game better on a TV screen, but can the person you have doing that write a compelling story that contextualizes the game in ways that make reading it worthwhile to those who saw the same game from the same view? Interesting questions, interesting challenges. So interesting that I’d love it if a newspaper or website dared to do something different in this regard with its coverage of baseball games.

But this example is not that. This, it seems, is simply a matter of a newspaper being cheap and hoping no one notices, all the while putting their reporters at a disadvantage compared to the competition. So to that I say pfffft! Either be bold and original or do things the established way. Don’t just cut costs and act like you don’t give a crap. Because if you don’t, why should your readers?

That’s a valuable point. Not sending reporters to games because it’s expensive is one thing, but why not try and experiment with other forms of innovative coverage, then? Just attempting to recreate a traditional story without having reporters there makes everyone’s life more difficult, and usually produces a subpar product. The Plain Dealer doesn’t necessarily have to cover every road baseball game in person, but if they don’t, they should at least try to be a little different and produce unique content that will draw in readers. At the moment, they’re just hurting their brand, which is already in enough trouble thanks to how their website got duped.